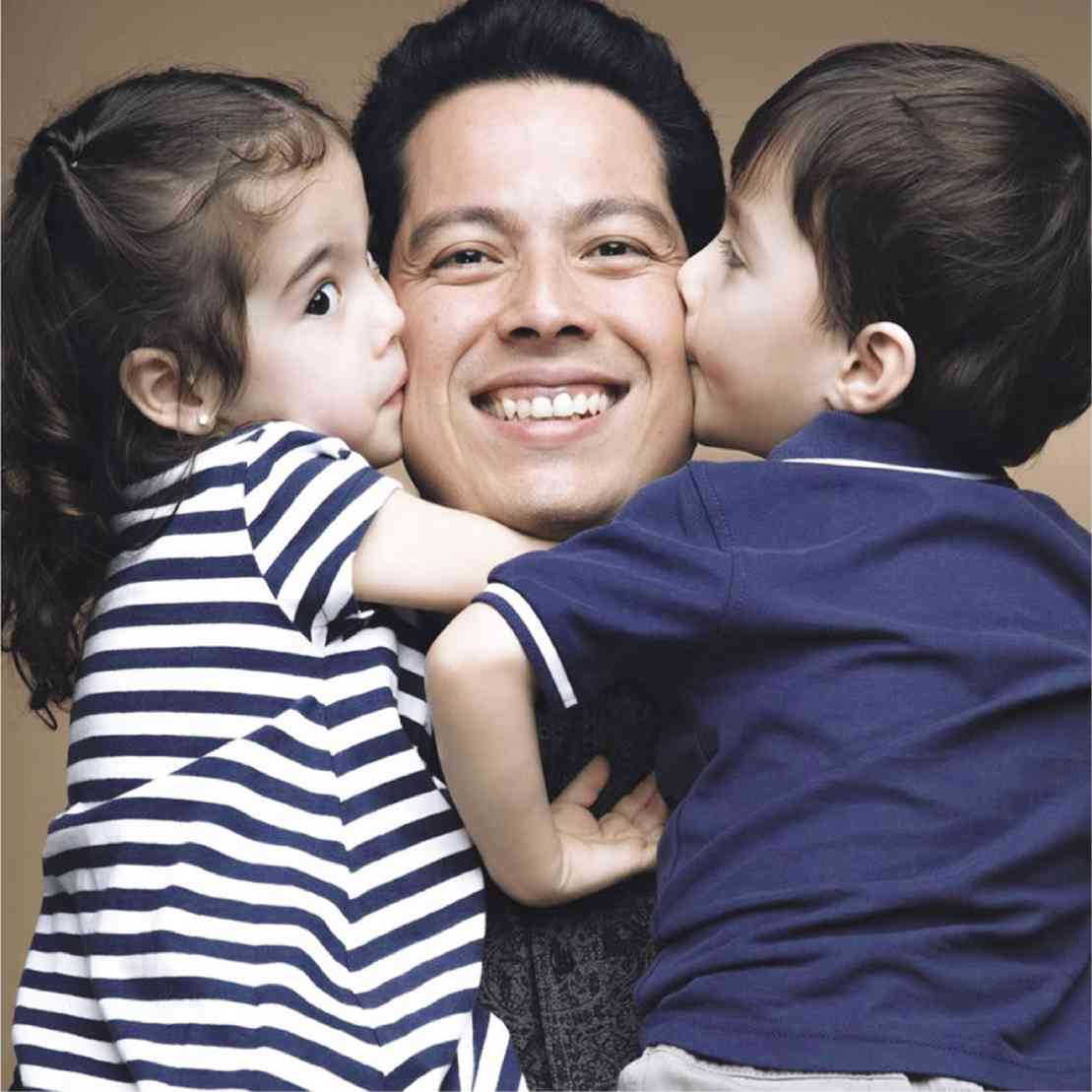 JON-JON Rufino with his twins, Lilith and Lucian

As a father, I’ve often wondered what I would do if one of my children told me later on that they were transgendered.

Of course I would be 100 percent supportive, but I admit that I would definitely feel sad about it, because the world is particularly cruel to these people, many times without knowing it.

As a gay man, I can only begin to imagine how hard it all is. I came out in the late ’90s. I couldn’t have conceived of doing it much earlier.

In my Opus Dei grade school and high school, classmates of mine who failed to hide their sexuality were bullied—though I was never subjected to it—and the school did nothing to stop this constant harassment.

Worse, the school authorities made it pretty clear that if you acted out your disordered tendencies, you would go to hell.

My family did nothing to counter this. It took all of my years at University of the Philippines, and a few more years in succeeding relationships with men whom I respect very much, to gain the confidence to come out to my friends and my family.

It would have been inconceivable in the ’80s—though perhaps that decade laid the groundwork for the ’90s—when I felt attitudes toward gay people really started to change, and tolerance transitioned to acceptance.

That process is far from over, both in the Philippines and the world at large, as the tragedy in Orlando proves. But for transgendered people, things are much more difficult.

I’d guess that society’s acceptance of transgendered people is about 20 years behind that of homosexuals.

Entertainment that deals with this is only now becoming mainstream. There was “The Danish Girl,” a fine movie with fantastic performances. The last two years, the Emmys have been enamored with the TV series “Transparent,” the story of a father in his 70s who finally has the courage to come out as a woman to his children.

And there is the real-life story that unfolded before the world, of Caitlyn Jenner, formerly Bruce, the virile American Olympic poster boy from the ’70s.

But in America, there are still the bathroom controversies, in which some states are passing laws that would force someone like Jenner to use the male restroom in public places. Transgendered people, both in the United States and the Philippines, face many more challenges than both homosexuals or cisgendered heterosexuals, or people that society deems normal.

Greater than the external challenges must be the internal self-doubt that takes decades to resolve. As a gay man, I questioned my sexuality from age 7 till about 22.

I thought that an attraction to girls would kick in at puberty. Nothing happened. So I thought I’d just have to fake it my whole life, until I saw enough evidence from the world that it was a valid way to live—not without challenges, but better than being in the deep paranoia of the closet.

I saw that many of the same friends who said rather nasty things about homosexuality when we were 13 or 14 started treating people known to be gay with respect when we turned 20 or 21. I thought, maybe that could be me. Maybe I wouldn’t lose everyone.

And it turned out, I lost no one. Though not completely without difficulty, I’m sure my coming-out experience was better than a good chunk of my peers in this country.

Sexual orientation is a good chunk of who you are, but we are not always thinking about sex. Well, healthy people do focus on other things. But sexual identity is an even more important aspect of who you are.

The point is, being gay is not the most important part of who I am. More than being attracted to men, I am a man. That identity pervades almost everything. I have always been very comfortable in my body.

Vanity aside, there is very little in me I’d like to change physically. Of course, I wish I were taller, or handsomer, or had a faster metabolism, but those are only modifications that would not essentially change who I am.

Transgendered people feel that they are born in the wrong body. There is an integral self-loathing that happens there. Many are willing to risk destroying parts of their bodies to physically become what they know they really are.

The first time I really thought about what it means to be transgendered was when I read the story of Jan Morris. I took a history course where I read a very well-written book about the ending of the British empire by James Morris.

I was rather stunned when looking up what else he wrote that he was now a woman named Jan, who happened to write about her experience in “Conundrum.”

She was married, with children, and had always confided in her then wife that she felt she was a woman. And her wife supported her decision to have sex reassignment surgery, though they got a friendly divorce at that point. But then, decades later, they remarried.

Which brings me to my deep admiration for Angelina and Joey Mead King. I do not know Ian very much, having met him only a few times, and never really having a conversation with him because I felt we had nothing in common. He’s known to be a car guru, and I joke that one manifestation of my gay gene is that I have no interest in cars. So when she came out earlier this week, it took me completely by surprise.

After reading the article about her, I imagine that it’s something that she struggled with her whole life, and her biggest opponent, initially, must have been herself.

I still can’t wrap my head around what it must feel like not to be comfortable in your own body. Then I read that it was her father’s health crisis while in Germany that triggered the need in her to seize the day and stop wasting time not living her most authentic life.

I’m so happy that everyone has been supportive, including her brother and stepmother who are friends of mine; her father, who was a friend of my stepdad; and her biological mother. I’m sure it was not easy for any of them. But the one I have the most admiration for is Angelina’s wife, Joey.

Joey has always struck me as the perfect combination of strong and beautiful. But we all have dreams for ourselves and images of our lives. Mine has involved children. I cannot see myself married to a woman. If my boyfriend told me he was really a woman, I would do everything in my power to help him be happy, but I could not be with him.

The kind of love that Joey is displaying is just epic. I have not spoken to them deeply on the subject, and I would never bring up with them vulgar details about their private lives, not for an article, not even for my personal curiosity. It’s none of my business. But as a person, I can’t help wondering, like everyone else, what happens now.

It seems that what happens now is that two people live a new life. An unexpected life, a rare life, a beautiful life together. The response in social media to Angie and Joey has been overwhelmingly positive.

I haven’t looked that deeply, but I haven’t seen the minority of comments by bigots saying stupid things that I normally still see in the bottom comments section of articles that show homosexuality in a positive light.

I’m sure I haven’t seen them because I haven’t looked that hard, but the fact that the negative comments haven’t risen to the top shows that we are evolving as a people.

It is true, however, that like Caitlyn Jenner, Angie Mead King will be spared the worst consequences of being transgendered because of wealth. Angie is not in a position to be hurt by people who would judge her.

Other people who are not protected by money are not so lucky. That’s not Angie’s fault. That’s the fault of the politicians who are not brave enough to pass the anti-discrimination bill that the Catholic Church has been blocking.

That’s the fault of everyone that makes a stupid joke demeaning the need to be something different from their expectations of you. That’s the fault of anyone who suggests that a woman is weaker than a man in any way other than just physical strength. But it’s getting better.

I still worry that one of my kids might be transgendered. Not that there has been any evidence. Despite my best efforts to treat my kids in a gender-neutral manner, my daughter just wants to take care of her baby dolls while dressing like a princess, and my son turns everything he is handed into an imaginary gun or sword.

That doesn’t prove anything, as Angie’s story shows. But because of people like Angie and Joey, if one of my children did find that they needed to live life as the opposite gender, they would know that it would be a happy life.