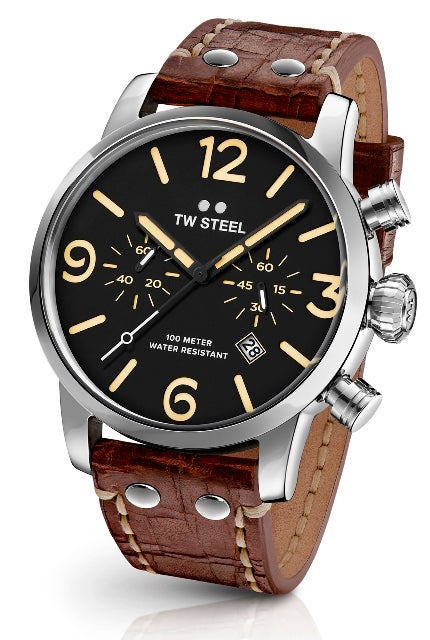 ALL leather straps of the Maverick Collection have a vintage, distressed look.

The crowd cheered as TW Steel CEO and co-owner Jordy Cobelens, in blue denim jeans and black tee emblazoned with the words “Son of Time,” arrived in a roaring Harley-Davidson bike to launch the latest Maverick Collection of the Dutch watchmaker brand.

In December 2015, TW Steel collaborated with Numbnut Motorcycles, Amsterdam’s young guns in the custom bike scene, to create a one-of-a-kind, handmade watch called Son of Time. The turbine movement Limited Edition timepiece, the only one of its kind in the world, costs 100,000 euros.

Ten years ago, TW Steel, then a virtual unknown in the industry, began its ascent to popularity by breaking watch-design traditions with the launch of its Canteen collection. In that same vein, the freestyle design philosophy of the Maverick Collection did not yield to any watchmaking rules; the watches are conversation pieces that integrate the art of horology and motorcycle assembly.

“We wanted to do a program that also goes back a little bit to our roots. We started as a cool, young urban brand. We were unknown, but when people saw us they thought we were doing really cool things,” Cobelens said. “Over the years we’ve had a lot of partnerships. This time, we thought we should do cool things with lesser-known people because we started as an unknown in the industry.”

A total of 42 different executions were made for the Maverick Collection, both in 45 millimeter and 48 mm sizes. TW Steel has always been known to create oversized unisex watches.

All leather straps feature the Capsa/Quick Change construction and have a vintage, distressed look. Double-layer sandwich dials bring the digits and indexes into focus to give them a greater depth in feel and look.

The steel Milanese bracelet, on the other hand, does not require tools for the bracelet to be adjusted to one’s wrist size.

“We always create watches that are value for money; that’s what separates us from other watches,” said Cobelens.

TW Steel will continue creating its own tradition, he added, and the numerous imitations in the market only mean they are going in the right direction.

“We created big watches, there’s no question about it; it’s nice to have watches that are big but still look sophisticated and make a very strong statement.”