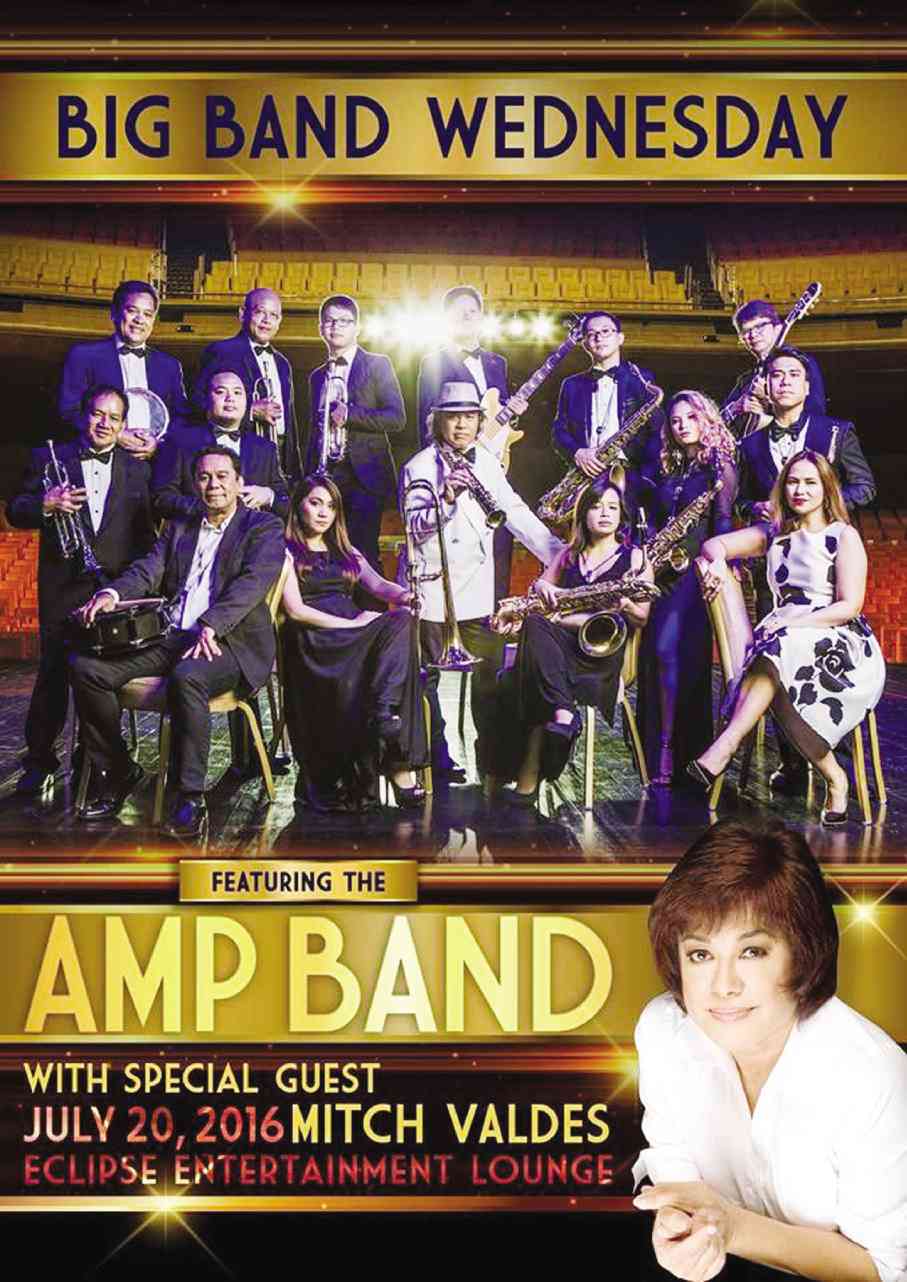 THE AMP (Asosasyon ng Musikong Pilipino) Band is really going places. From its home base in [email protected] in Quezon City, the swinging jazz band—composed of the country’s top session musicians with musical director Mel Villena conducting—has been given the opportunity to play in other venues around the city, including a few special gigs in Malacañang.

The band is about to set foot, for the first time, at Solaire Resort and Casino’s Eclipse Lounge, where it will play once a month starting this Wednesday, July 20, Solaire entertainment director Audie Gemora tells us.

Villena is excited, though he says it would really be swell if Solaire agrees to have AMP’s 18-piece big band lineup later on.

For Wednesday it will be a nonet, or a nine-piece setup, Villena tells us.

Nonetheless, the music will surely draw the attention of the high-rollers playing near Eclipse. It’s the kind of sound that completes the ambiance of a Martin Scorsese movie set in a casino. We can’t wait to swing by.

One late night, back in the 1990s, we were dragged by friends to a gay bar where movie folks hung out. Sometime after the macho dancers finished their routine, a movie columnist got hold of a mic and, backed by the karaoke, started singing Kenny Rogers’ “Through the Years.”

And all these years, while riding taxicabs and GrabCars, we continue to hear the songs of Rogers on the radio. There’s no escaping, really, as his music—country, pop, middle of the road, retro, whatever you call it—breathes in your consciousness with the warmth and soul of a dad, or a lolo, reminiscing on a life well lived.

Rogers, 77, is currently on the Asian leg of a world tour dubbed “The Gambler’s Last Deal” that he says is also his final live appearance as a musician.

The tour will stop by Manila on Aug. 11 at Smart Araneta Coliseum, presented by Ovation Productions.

We expect the kind of crowd that descended in huge numbers to watch Engelbert Humperdinck’s concert also at the Big Dome.

These are the folks who are more or less the same age group as Rogers, who would be delighted to hear oldies but goodies music.

It’s always nice to have a drink after work. On July 20, there’s a good opportunity to imbibe some spirits while watching TGIFridays’ “21st Shake, Rattle and Pour” bartending competition.

Some 19 bartenders from various TGIFridays branches will compete in the Compulsory and Freestyle rounds starting at 4 p.m. in TGIFridays Midtown Atrium, Robinsons Place Manila.