Have paper, will draw–or the evolution of Joya | Lifestyle.INQ ❮ ❯ 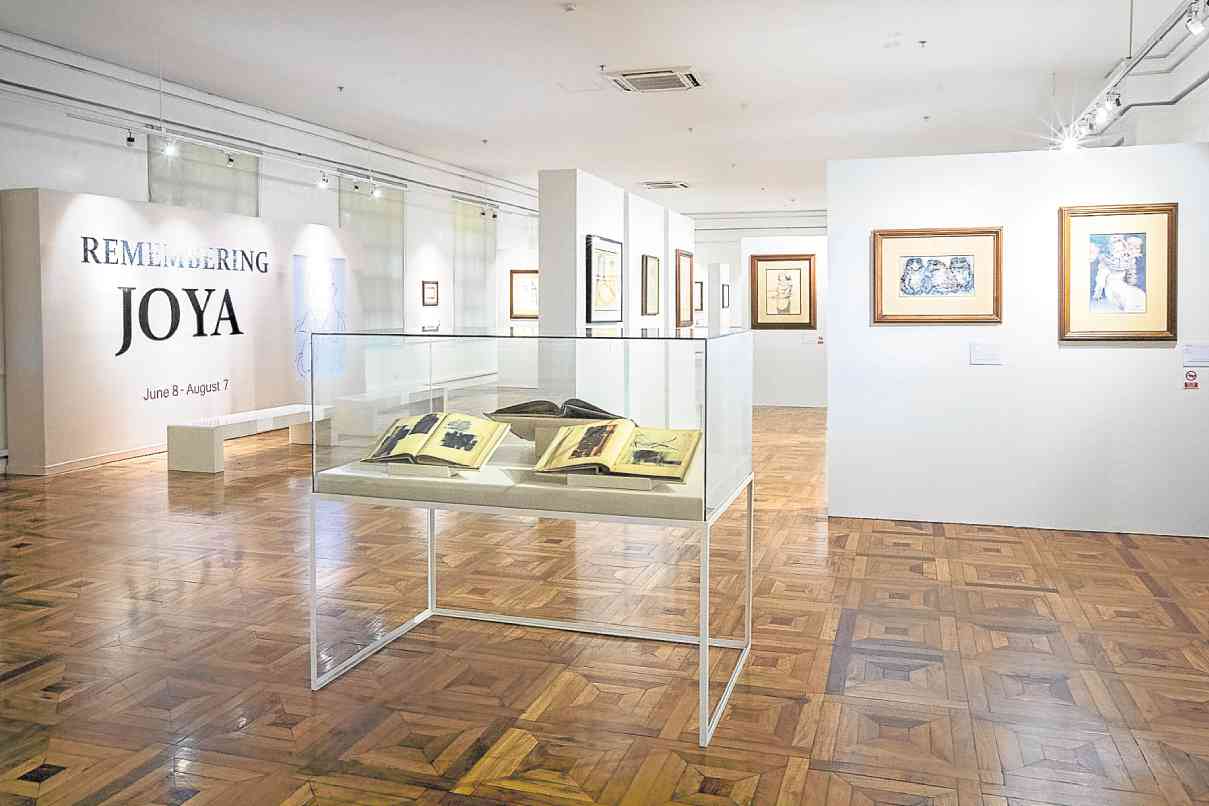 Have paper, will draw–or the evolution of Joya

As long as he had a piece of paper, even a tiny bus ticket, and a pen, he would draw. Several pages of phone books would be filled with his doodles by the time he finished a call, Baldovino said.

Joya himself, in the 1978 book “Joya by Joya: Book of Drawings,” recalled that although nothing in his childhood indicated an artistic future and there was not a single member of the family who could have led him to the artistic path, he did have “a predisposition to doodling on house walls (to the distress of my parents) , and drawing incessantly in school (to the distress of my teachers) . . .”

He would also write in the book: “Although I may occasionally alter or modify objects in the process of creation, drawing has always been my most direct form of relating to the universe around me. Embodying the seeds of an idea—specially in my earlier works—drawing, for me, has always represented complete, exacting works of art.”

How far the compulsive doodler had gone from those childish sketches to being a multi-awarded artist and 2003 National Artist for Visual Arts is currently on view at the National Museum’s “Remembering Joya,” a retrospective exhibit to mark the 85th birth anniversary of the former dean of the University of the Philippines College of Fine Arts (CFA) in Diliman,Quezon City.

More than 80 pieces of pen-and-ink, oil, plates, prints and other art works of the prolific artist, on loan from the private collections of Baldovino and her three children—some of them being exhibited for the first time— are included in the exhibit.

The pieces show the evolution of Joya, mentored in the traditional art at CFA by some of the country’s most revered masters, including Fernando Amorsolo and Guillermo Tolentino, into the Philippines’ foremost abstract expressionist. The artist credited his off-campus sessions with such established artists as Arturo Luz, Anita Magsaysay-Ho, Hernando Ocampo, Fernando Zobel de Ayala, Vicente Manansala and writer-gallery operator Lyd Arguilla of the now defunct Philippine Art Gallery (PAG) in the early 1950s for stoking his curiosity about modernism.

But the conflicting influences left him uncertain about the direction his art should take. “Caught in the crossfire between my traditionalist mentors and modernist friends, I was left with serious doubts about my ability to absorb much of the traditional art,” he wrote in “Joya by Joya.”

It was in New York, where he attended the Pratt Institute as part of a Fulbright-Smith Mundt scholarship, that Joya encountered the “abstract” that definitively changed and ultimately defined his style.

The “master colorist” resolved inner conflicts about tradition and modernity, winning even more honors for the works resulting from his full maturing as an artist.

The National Artist, whose career was greatly boosted by his first prize win at the Shell Art Competition in 1952, as a young man, would also do his bit to give young artists a leg up. After Joya became dean of CFA, the institution that turned him from being simply an inveterate doodler to a disciplined artist, he decided to launch a Fine Arts program in UP Cebu, complementing it the following year with a painting competition among young artists, which is now on its 40th year.

Baldovino said the Fine Arts program in Cebu and the annual Joya award stemmed from her brother’s generosity. He wanted to give other young artists the opportunity to pursue their vocation and passion.

“He brought not only his art but all art to the people. He always sought to share,” wrote National Artist for Literature Francisco Arcellana in the foreword of the coffee-table book “Joya” (1996).

Baldovino also recalled that her brother’s generosity enabled the man who framed the artist’s works to send all his children to college and eventually pursue a political career. Last she heard, Baldovino said, the framer was the vice mayor in his home town in Mindoro.

“Remembering Joya” is on view until Aug. 8 at Gallery 21, 3/F, National Museum of Fine Arts (formerly the National Art Gallery). The museum is open Tuesday to Sunday, 10 a.m.-5 p.m. Admission is free on Sundays. On weekdays adults pay an entrance fee of P150; senior citizens, P120; and students, P50.