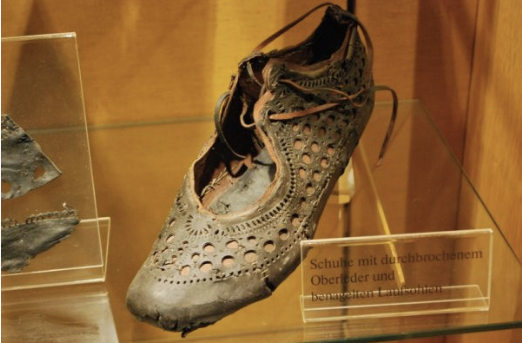 This retrieved gem of a shoe just brought the whole “retro look” to a whole new level.

An ancient Roman relic found inside a local well in Saalburg, Germany,  has been making the rounds in various social media sites for its “stylish” design.

The classic footwear, believed to be 2,000 years old, was discovered inside a local water repository and donated to the Saalburg museum, according to the Romans Across Europe website.

The shoe’s origin was further validated after local historians explained that the Romans  “were the originators of the entire-foot-encasing shoe.”

“There was a wide variety of shoes and sandals for men and women. Most were constructed like military caligae, with a one-piece upper nailed between layers of the sole,” the website said.

“Many had large open-work areas made by cutting or punching circles, triangles, squares, ovals, etc., in rows or grid-like patterns. Others were more enclosed, having only holes for the laces. Some very dainty women’s and children’s shoes still had thick nailed soles,” it added.

Many commenters lauded the shoe’s design and said it would be considered “fashionable” in today’s standards. Others even jokingly asked where they could cop a pair.

Meanwhile, The Saalburg was a fort that protected the boundary between the Roman Empire and the Germanic tribal territories around 260 AD.

At its peak, the place reportedly housed over 2,000 people in various connecting villages.

Sometime during the 19th century, The Saalburg was rediscovered and excavated, then later fully reconstructed as a small town located on the Taunus ridge, northwest of Bad Homburg, Hesse, in Germany.

The UN Educational, Scientific and Cultural Organization (UNESCO) has declared it a World Heritage site in 2005.  Khristian Ibarrola