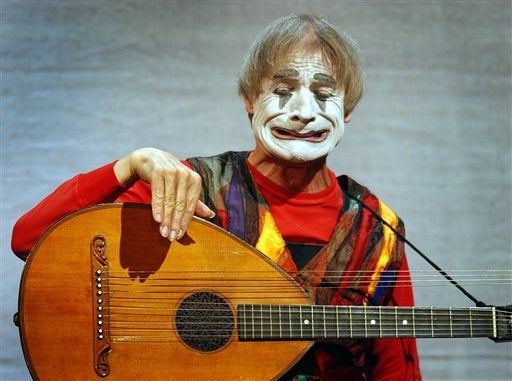 In this Nov. 20, 2003 file picture, Clown Dimitri performs in in Zurich, Switzerland. The well-known Swiss entertainer died at the age of 80 as his family confirmed Wednesday, July 20, 2016. AP

GENEVA — Clown Dimitri, a beloved Swiss clown and mime over nearly six decades who studied under Marcel Marceau and spread smiles from Broadway to Congo with a traditional style that shunned high-tech theatrics, has died, his office said Wednesday. He was 80.

Dimitri died Tuesday in the southern village of Borgnone, said Verena Graf of the “Clown Dimitri Secretariat” by phone. She said the cause of death was not immediately clear but he had not been ill.

A man of few words in white-face on stage in a country with four official languages, Dimitri spoke to audiences by combining naive, bumbling humor with acrobatics and skill at musical instruments.

Known mainly by his one-word name, Jakob Dimitri is survived by five children and his wife. Funeral arrangements were not immediately available. TVJ