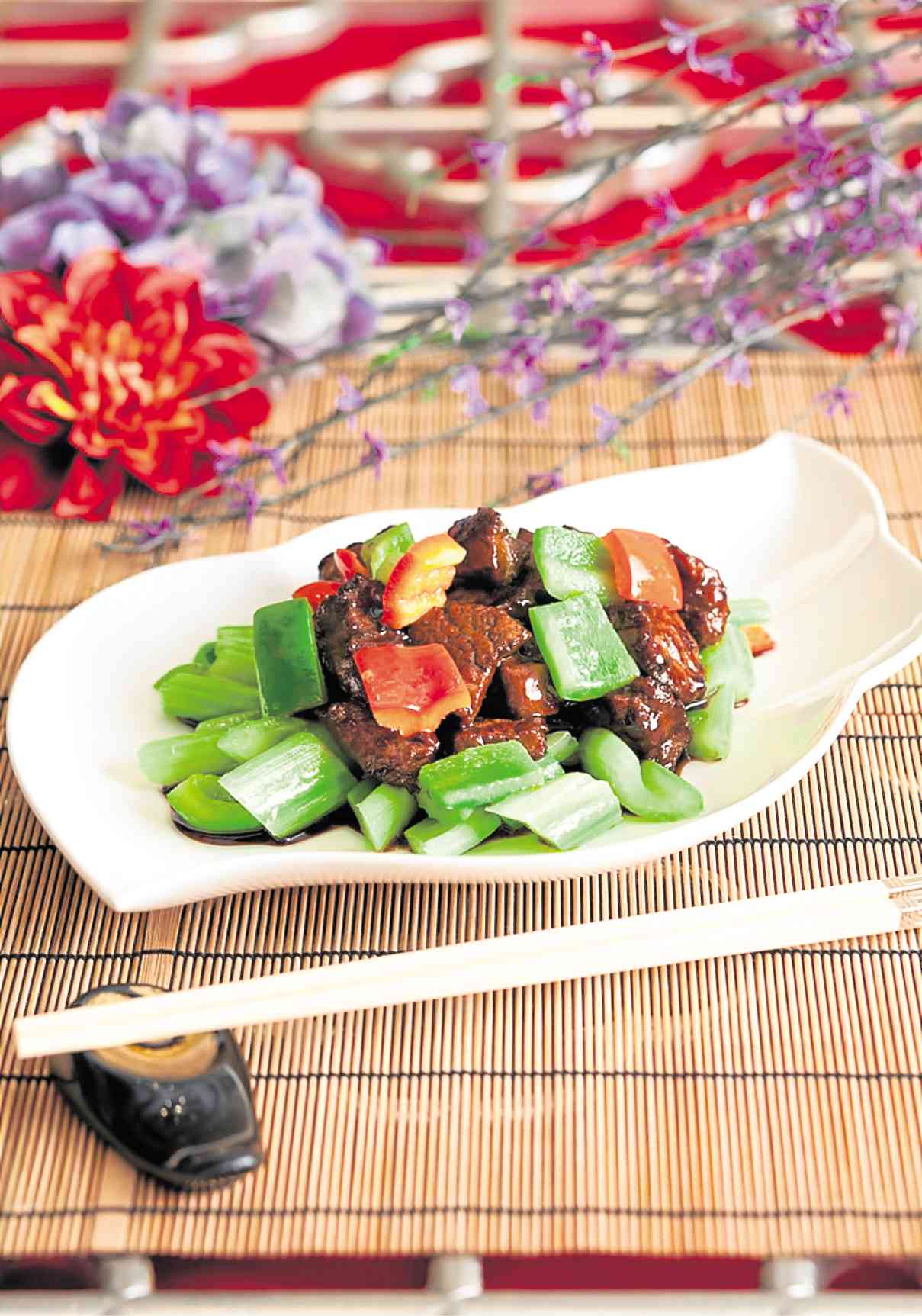 Eating Chinese at the Shang and Conrad

The irony was probably lost to those around the table at Shang Palace in Makati Shangri-La. We were eating Chinese food on the day the Permanent Court of Arbitration in the Hague was finalizing its ruling on the Philippines vs China dispute on the South China Sea. No one seemed bothered about the verdict, maybe because we knew the Philippines would win and raise its reputation as the little country that could stand up to a giant like China.

The offerings of new executive chef Ben Lam was on display. The dim sum and appetizers were familiar—pao and dumplings in different forms but all very traditional. Of the main courses, the best was sautéed diced tenderloin with celery, a surprise that the two go well together.

The chef wanted it known that he could also do a “fortune chicken,” a celebratory dish under a baked crust which one had to break with a hammer. It was really a version of beggar’s chicken, but because “beggar” doesn’t augur well for an event like a birthday, the chicken was thus renamed.

The Chinese have this penchant for eating food whose names evoke riches or good luck. We were told that an advance order of one day was needed for this special dish.

Adding to the long menu, chef Lam served crabs in chili sauce, the bits of dried chili and garlic overwhelming the baked crustacean. But it was worthy of a surprise although it didn’t seem so anymore when we had to wait for the food’s photo session to end. Please, let us eat now, one wanted to say.

And when we did, after brushing aside the red hot chili bits, the huge mud crab showed itself and to our taste buds—fat and fresh and deserving of a celebratory dish as well, just right for the hot issue that is the South China Sea.

An invitation to eat more Chinese food was sent by the newly opened Conrad Manila (a Hilton Hotel brand) at the Seaside Boulevard in the Mall of Asia complex in Pasay. The irony, again, of celebrating the Hague ruling in our favor—with Chinese cuisine!

The Conrad’s Chinese food outlet is called China Blue by Jereme Leung. Chef Leung is a proponent of modern Chinese cuisine in which traditional techniques are still used but reinterpreted in terms of presentation.

The award-winning chef manages other restaurants including those of Hilton brands such as the Ufaa at the Maldives and Le Chine at the Waldorf Astoria in New York.

With such a reputation preceding him, we awaited his first course. It was a bun that looked like a mushroom that even had a stalk.

The siopao top was slashed and had black streaks, just like a mushroom, stuffed with still more mushrooms.

A more traditional-looking shrimp dumpling came next, though sprinkled with what was described as ivy moss plant, with taro dumpling embedded with scallop.

Next was a trio of appetizers, a nouvelle presentation of fish lacquered with sauce on a shisho leaf, shiitake cooked in a sweet vinaigrette and studded with sesame seeds, and perhaps the one that represents Leung’s modern touch—goose liver mousse shaped like a cherry with a red covering and squid ink crumble.

The double-boiled soup with crab claw had a flavor tasted before in one very good Chinese restaurant whose name escapes me now. The mushroom broth tasted like the sabaw of balut, sipped and savored by those who enjoy this duck egg where the embryo has died. That may not sound appetizing but it’s one example of real umami.

Just like in Western dining, a sorbet was served and everyone agreed that it tasted of champoy or dried plum with wolfberry added. You just have to trust the restaurant manager when she tells you it’s good for the skin.

The crisp shrimp, with its sauce of wasabi and mango, was familiar to us.

Tender braised Wagyu beef cheeks didn’t need knife and fork to slice it. We wondered if we could eat this with rice, but that came after the beef was finished—fried rice with pork floss and XO sauce strewn on top.

Dessert was tofu gelato with bacon strips with a warm ginger egg mustard and peach gum.

Chef Leung made an appearance during the lunch, together with China Blue chef Kor Eng Yew, whom he trusts to bring out his cuisine the way he designed it. He said chef Yew fashioned the sorbet himself.

Chef Leung started out in traditional Chinese restaurants, but like Picasso, he has created his own modern style.

The Conrad’s general manager Harald Feurstein showed the blue show plate expressly ordered in Shanghai from a company that does hand-painted designs. It had horsemen in different colors on a chalk-blue background. And the chandeliers also emphasize the color scheme chosen for the restaurant.

But the best blue color was the sea outside the hotel’s huge picture windows. Behold the famed Manila Bay sunset, if you come early enough for dinner.