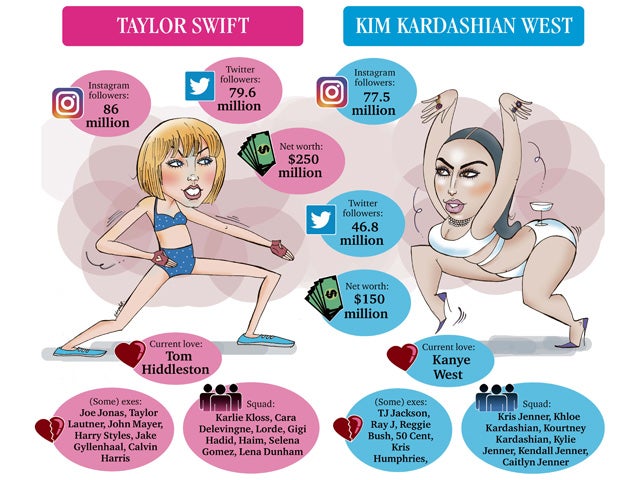 Although it has been almost seven years since Kanye West interrupted Taylor Swift’s MTV Video Music Awards Best Female Video acceptance speech, the drama is far from over.

We’re sure you know the he-said-she-said craziness by now: Taylor reacted negatively to Kanye for using her name in his song “Famous” (“I feel like me and Taylor might still have sex/Why? I made that bitch famous”).

“As the first woman to win Album of the Year at the Grammys twice,” she said, “I want to say to all the young women out there, there will be people along the way who will try to undercut your success. Or take credit for your accomplishments or your fame.”

Kanye and wife Kim Kardashian have insisted that Kanye asked Taylor for permission to use her name in the song, and that she had given her consent. Taylor has denied this.

This week, Kim took to Snapchat to post proof, releasing videos proving that Kanye did talk to Taylor about using her name. “I mean, go with whatever line you think is better. It’s obviously very tongue-in-cheek either way. And I really appreciate you telling me about it, that’s really nice,” said Taylor in the video.

Now there are talks about the possibility of legal battles and consequences. The internet has been abuzz about the whole mess. There are hilarious tweets, countless memes, numerous articles. The spat has triggered discussions about race, gender, money and power. Selena Gomez tweeted, “There are more important things to talk about.”

But not everyone agrees.