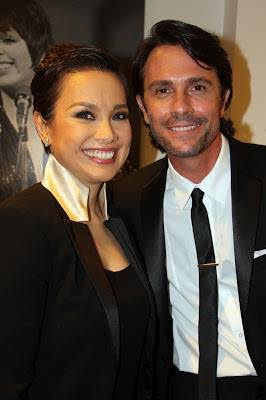 Eric Kunze: “Lea and I first worked together in ‘Les Misérables’ as Eponine and Marius. I have always felt we had chemistry on stage, and I am excited to tell the story in ‘Fun Home’ with her.” ALL PHOTOS FROM BOBBY GARCIA

In her 2006 graphic memoir “Fun Home,” comic artist Alison Bechdel explores her life as a young lesbian growing up in small-town Pennsylvania and her relationship with her father Bruce, a closeted gay funeral director struggling with his sexuality.

The dark and funny book, which has earned rave reviews from both critics and readers, made the successful leap to the stage in 2013 as an off-Broadway musical production before moving to Broadway and raking in awards at the 2015 Tonys, including Best Leading Actor in a Musical, Best Musical, Best Book of a Musical, Best Original Score and Best Direction of a Musical.

This November, two months after the Broadway production is set to close, “Fun Home” will make its international premiere in Manila as Atlantis Theatrical Entertainment Group stages it at the Carlos P. Romulo Auditorium at RCBC Plaza Makati.

“I am so thankful that we have been entrusted to premiere ‘Fun Home’ internationally,” said director Bobby Garcia. “It is a soaring musical about the complexities of what it means to be a family. And I can’t wait to create an original version of this landmark musical alongside an amazing cast and creative team.”

Garcia said he had wanted to stage the show since it first opened at The Public Theatre in 2013. “I have also been a fan of Alison Bechdel’s graphic novels. Jeanine Tesori and Lisa Kron have crafted a trailblazing musical that expands the possibilities of musical theater; it is one of the finest musicals of our generation.”

Lea Salonga will be playing Bechdel’s mother Helen. Garcia said, “Casting ‘Fun Home’ has been a unique experience. I spoke to Lea about it after she saw the show in New York City, and asked her if she wanted to do it in Manila and play Helen. She said yes right away. She fell in love with the musical as much as I did. I think Lea will be amazing as Helen. And I can’t wait to hear her sing ‘Days and Days.’”

The show will reunite Lea Salonga with Broadway actor Eric Kunze, who played Marius to her Eponine in the 1993 production of “Les Misérables” on Broadway. Kunze will play Bruce, Bechdel’s father.

“I am so thrilled to be performing in Manila with  ‘Fun Home’ and my dear friend Lea,” said Kunze. “Lea and I first worked together in ‘Les Misérables’ as  Eponine and Marius. I have always felt we had chemistry on stage, and I am excited to tell the story in ‘Fun Home’ with her. Over the recent years we have sung together in various concerts, but the creative process of learning and crafting a new production is a unique and very special experience.”

“By all accounts, I have heard that they were dynamite on stage together,” said Garcia. “I think it will be a wonderful reunion for them to work on a new musical together after 23 years.”

He added, “The role of Bruce is a very difficult role to cast because of the vocal and emotional demands of the part. I wanted someone as seasoned as Lea and also someone who already had chemistry with her. Eric Kunze was always at the top of my list from the very beginning. I thought he could bring the character to life in a unique and original way. Tara Rubin Casting along with Kaitlin Shaw, our casting representatives in New York, were instrumental in helping us cast Eric in ‘Fun Home.’ I am so happy that he will be coming to Manila, and I can’t wait to begin rehearsals with him.”

This will be Kunze’s first trip to the Philippines. “But having performed over many years in the musical ‘Miss Saigon,’ with a predominantly Filipino cast, the culture is definitely not unfamiliar to me,” he said.

He is excitedly preparing for the show. “I have ordered the graphic memoir by Alison Bechdel, and am very much looking forward to reading it. I have been listening to the original-cast album to familiarize myself with the music, and I have just seen the original Broadway production last month while I was in New York during the Carnegie Hall Gala. I was totally immersed in the story from the first note of the orchestra to the final bow. It’s a powerful show which everyone can take something from, and relate to either their own lives or family. I can’t wait to share this with the people of Manila. And I am very excited to be part of your community this year!”