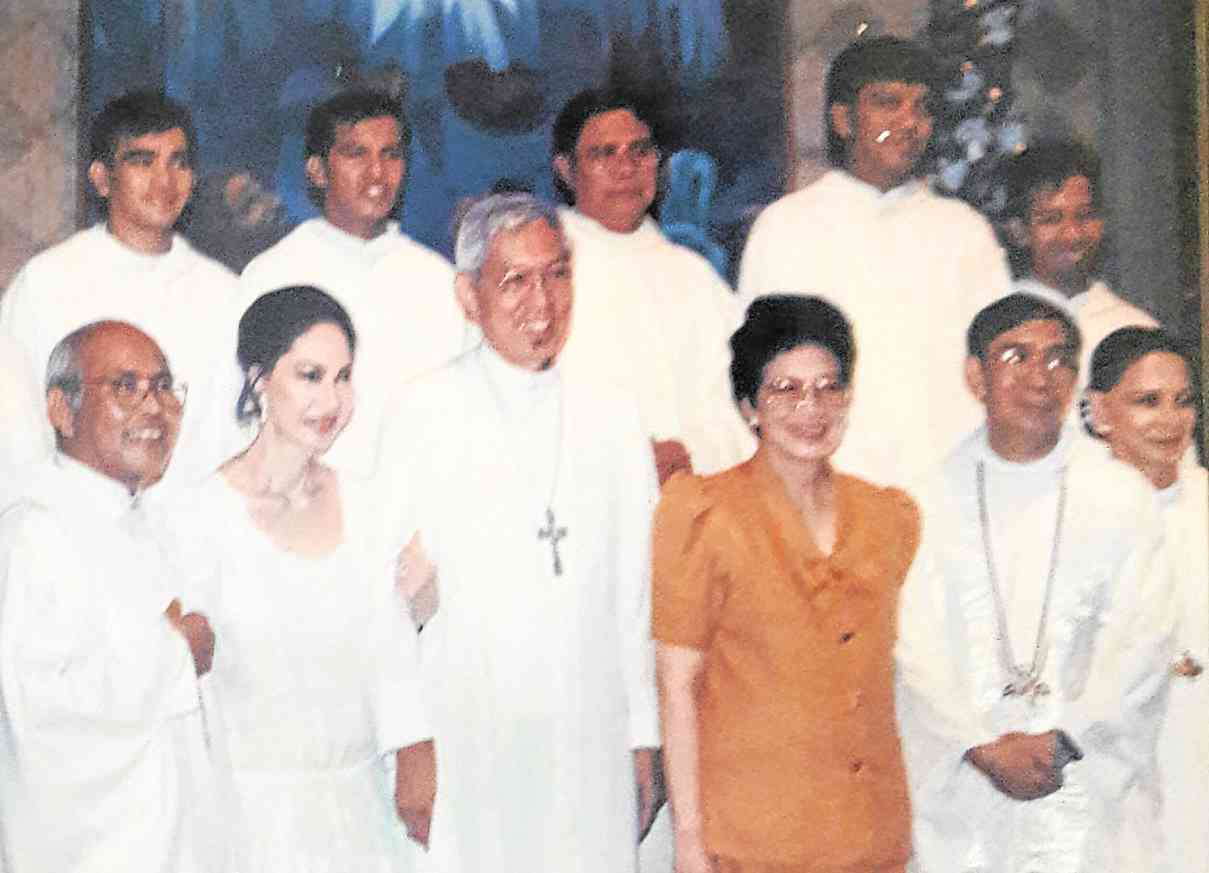 MELDY Cojuangco (second from left), with then President Cory Aquino, at the First Transfiguration Lecture Series and Music Festival in 1993

Meldy Cojuangco in the monastery

IN 1991, I was surprised  to learn that  Meldy Cojuangco was coming from Manila to our Monastery of the Transfiguration in Malaybalay, Bukidnon. After all, close friends knew that she hardly went out of town, and certainly not out of Luzon.

Our Monastery Boys Choir would have its very first concert at the Pryce Hotel in Cagayan de Oro, and I thought of inviting her to the concert and to our monastery.

When I called to invite her, I was very glad that she sounded so interested; she even suggested that I also invite Bea Zobel, a good client of mine for years before I abandoned fashion design and entered the monastery.

How funny it was to hear Mrs. Zobel say later over the phone, “Yes, I would like to go with Meldy and see for myself if you are really inside that monastery!”

And so on that memorable day, the two ladies, with Mrs. Zobel’s cousin who was visiting from Madrid, flew on a private plane to Del Monte airport in Bukidnon, where I fetched them.

But before bringing them to the monastery, I was told that Mrs. Zobel’s cousin wanted to see pineapples. After driving through the Del Monte pineapple plantation for half an hour, she exclaimed, “Where are the  pineapples?” Absolutely surprised, I answered, “But they are all over, on both sides of the road!”

She looked more closely and gasped, “Oh my God, I thought pineapples grew on trees!” Mrs. Cojuangco was demurely laughing the whole time.

Touched by the Lord

The Lord must have touched Mrs. Cojuangco’s heart during that short chapel visit. That evening, as we watched the Monastery Boys Choir in concert, she had already made up her mind that her next commitment would be in Mindanao.

Soon, I invited her to be the chairperson of the Monastery Development Program, while our superior, Father Abbot Eduardo P. Africa, OSB, invited his uncle, Sen. Vicente Paterno, as cochair.

So, with Senator Paterno, fiscal Benber Apepe of Cagayan de Oro and his wife Nila, who were invited to be the chairpersons for Mindanao, they planned a program of activities to create more awareness of our Benedictine community of monks in Mindanao.

In 1993, during the celebration of the 10th anniversary of the Monastery of the Transfiguration, Mrs. Cojuangco was the recipient of the very first Transfiguration Award, with President Cory Aquino.

While “Tita Cory” stayed in the “presidential suite” (so-called because it was the only room at the Novitiate with a mirror, leading all the other women, including Maria Montelibano, to go to her room to comb their hair), Meldy Cojuangco was given the Bishop’s Room, the only one with a private yet tiny toilet and bath—tiny, as in 1.5×1.5 meters!

When she asked where the shower was and I pointed at it on the side wall, she said, “Oh, but everything will get wet! Sayang naman! I will go to the common bathroom.” With her yaya guarding the door, of course.

After that stay, whenever we would have a VIP guest coming over and we would worry about our simple accommodations, we would jokingly say, “If Meldy Cojuangco can survive in the monastery, anybody can!”

She would always anticipate the needs of others. When a brownout suddenly occurred just before dinner after the 10th anniversary celebration, I rushed to check if she was okay. She immediately said, “I’m okay, Dom Martin. Please go and check if Cory is okay.”

Later at the reception, she even insisted on falling in line to get her food at the buffet table, rather than being served.

The annual Monastery Boys Choir concerts at the Cultural Center of the Philippines, thanks to Meldy Cojuangco’s sponsorship, were always “full-house” performances. She made sure she invited her friends who were willing to help.

The concerts helped raise funds for the Educational Assistance Program of the Transfiguration Foundation, Inc.

Even long after the choir was disbanded in 2000, its former members were able to continue  their high school education. Some went on to finish college and were hired by the monastery.

Mrs. Cojuangco saw the wisdom of an education scholarship program. The poor, she agreed, when given the same chances, could also excel, perhaps even surpass their rich counterparts.

But her biggest contribution to the church in Mindanao was the Monastery Church of the Transfiguration, designed by National Artist for Architecture Leandro Locsin. With the help of our dear monastery benefactor Manolo Agustines, who closely coordinated with the Locsin & Associates Group headed by Andy Locsin, the church with no walls soon became a reality.

The church’s design also ensured that there would be no separation between the rich and the poor—an idea that appealed so much to Mrs. Cojuangco.

Unfortunately, she was not able to come to the formal inauguration and blessing on Aug. 6, 1996. But she was able to fly to Malaybalay a year later to attend the formal blessing and enthronement of the replica image of Our Lady of Montserrat in the church she built.

The abbot himself of the Abbey of Our Lady of Montserrat in Barcelona, Fr. Sebastia Bardolet, OSB, came to enthrone the image donated by the monks of Montserrat.

Ever the perfect hostess, Mrs. Cojuangco hosted a dinner in the abbot’s honor at the penthouse of the PLDT building two days later. It was a good chance, she said, for Father Abbot Bardolet to meet the monastery friends who had been helping all these years.

With the remarkable table setting designed by Rachy Cuna, and the “haute cuisine” prepared by Glenda Barretto’s Via Mare, the visiting abbot later exclaimed that he had never experienced such hospitality.

When I started to work on my dream project, the Filipino Liturgical Vestments Exhibit, for the celebration of the Centennial of Philippine Independence in June 1998, I had only one person in mind to be the chair of the executive committee—Mrs. Cojuangco. I knew she was again helping build a church somewhere in Luzon, aside from the many other charities she was constantly supporting.

Would she help me with my dream project?

“Yes,” she replied, “I will help. Just give me time to finish the construction of the church I have already started.”

And so for two and a half years, I kept her updated on the progress of the research and work with the indigenous weavers.

She was happy to know that the monastery project would somehow benefit the ethno-linguistic groups of Mindanao—our “neighbors” in Lantapan, the Talaandig, the T’boli in Lake Cebu, the Mandaya, even the Yakan in the southernmost island of Basilan.

I was, therefore, deeply saddened when, last May 10, Mrs.  Cojuangco’s daughter-in-law, Lizette, confirmed the news that she had died peacefully at home.

It has been more than two months since her death, but still the feeling of great loss remains. Indeed, she was the last of her breed—that breed of ultra-glamorous women of Philippine society who tried to make a difference in society.

In all the years I had known Mrs. Cojuangco, from my years as fashion designer in the 1970s to the Congregacion del Sto. Niño years in the ’80s when she became our first hermana mayor, to the ’90s when our friendship grew even more with her involvement in the apostolates of the Monastery of the Transfiguration in Malaybalay, I got to know a truly rare person who saw wealth not just as security, but as a means to show generosity.

As a well-known Benedictine author puts it, wealth was redefined for her as a blessing that was meant to be shared.

It is no wonder, therefore, that her children are also involved in many charitable undertakings. Joan Chittister, OSB, once wrote about people with “holy wealth,” and it seems the best way to describe Imelda Cojuangco.

She is dead, but she will live on in the memory of people whose lives she touched. Hers is a social contribution that will long outlive the life of the giver.

Thank you, Lord, for having given us Meldy Cojuangco. Thank you to her children—Tonyboy, Marvie, Choy, Ningning and Mikey—and to her whole family, for having so generously shared your “Tata” with all of us.

Thank you, Tita Meldy, for showing us through your life, that love is not dead, and that God is truly alive.