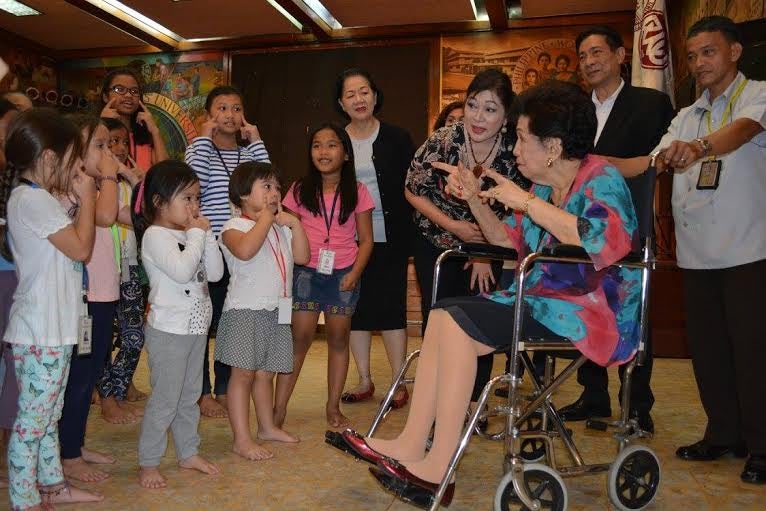 HELENA Benitez during the recent Sayaw festival, interacting with children

Even in ICU, Helena Benitez was putting finishing touches on ‘Bayanihan’ book

AUSPICIOUS that former Sen. Helena Benitez, this writer’s aunt, a founder of the Philippine Women’s University (PWU), and president emerita of Bayanihan, should pass away on the same year the dance company is marking its 60th anniversary.

Senator Benitez passed away last July 14; she was 102 years old. Meanwhile, this Aug. 1 will mark the 60th anniversary of Bayanihan, which she and PWU organized to promote Philippine folk dance forms here and abroad.

It should be remembered that Bayanihan had its first documented performance on Aug. 1, 1956, during the World Federation of Teachers Association assembly. The program then was titled “Bayanihan, An Evening of Music and Dance Festival.”

Since then, Bayanihan has seen many more years of pursuing artistic excellence, touching lives and sharing culture in pursuit of the Filipino dream. For the anniversary, we are publishing a book to commemorate the diamond milestone. In fact, one of the last acts of Benitez before she passed away was choosing our book’s title: She did this while confined in the intensive care unit last April.

She told us the book should be light reading; she instructed us to keep it simple. She chose to write the first chapter. She explained that the book should   show Bayanihan’s success to serve as an inspiration for others.

We in the artistic team (Bong José, Lito Vale Cruz and myself) are in the middle of preparations for our 2016 season at the Cultural Center of the Philippines: “@60… A Diamond Dance o Rama” is subtitled “A Ravishing Dramatization of Bayanihan’s Global Dance Trail.” It will feature three segments: Flashes of the Past, Flight to Greater Heights and Reaching Out to the Future. The 2016 season will pay tribute to Benitez.

Everyone of us in Bayanihan considers it a great privilege to be working in an institution which Benitez had nurtured, guided, encouraged and loved. Bayanihan’s contribution to the nation has been affirmed and reaffirmed by this woman of strength and brilliance.

Her glittering vision and her formidable dedication had enabled Bayanihan to present to the world the beauty of the Philippines and the wonderful story of the Filipinos through music and dance that will forever be etched in the global consciousness.

The author is trustee and executive director of the Bayanihan Folk Arts Foundation.