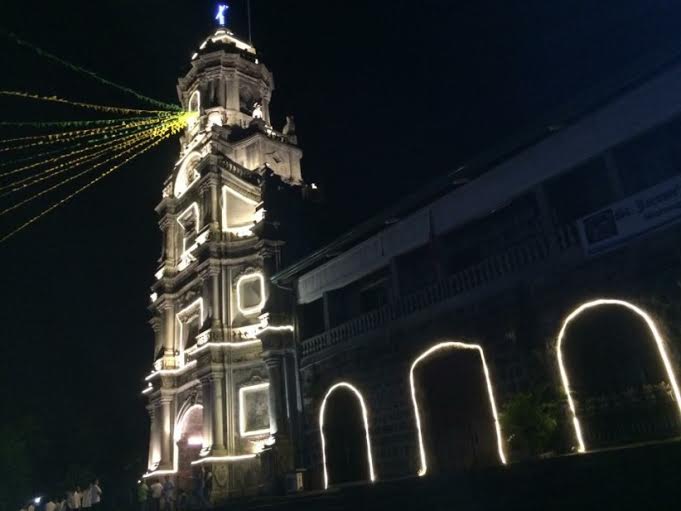 MORONG Church at night.To put the LED lights, holes had to be burrowed on the facade. EA Sembrano

HERITAGE alert has been raised in three towns in Southern Luzon recently.

In Rizal province, residents and heritage advocates are crying foul over the installation of light-emitting diodes (LED) lights on the outer and inner walls of the Morong Church, in the process, boring holes and chipping off adobe stones on the church built by the Franciscan friars.

According to residents, the church, built in 1615, now looks like a perya (circus) at night which they say a desecration of the centuries-old structure, obscuring its baroque identity.

It took six months before the lights were started to be installed because of the number of holes that were bored into the walls, said a resident.

It is likewise a presumed important cultural property (ICP) under the National Heritage Act.

Ryan Palad, a local historian and author of “Bayan ng Tayabas: Kasaysayan at Kalinangan 1575-1985,” said that the bambang or adobe canals of the town that were built by the Spaniards in the 1700s had been destroyed in the process of expanding them to check flooding. He added that town residents should observe proper garbage disposal so that the canals would not be clogged.

He said what should have been done was to divert the water to newer and wider canals.

Palad stressed that the Spanish canals were part of the the town’s history and architecture. The expansion of the canals started two years ago under the term of former mayor Faustino Silang.

Mayor Ernida Reynoso expressed her regret over the incident and promised to reuse the demolished adobe stones in a “meaningful project” showcasing Tayabas’ rich history and culture.

Is this another case of destroy first, rebuild later?