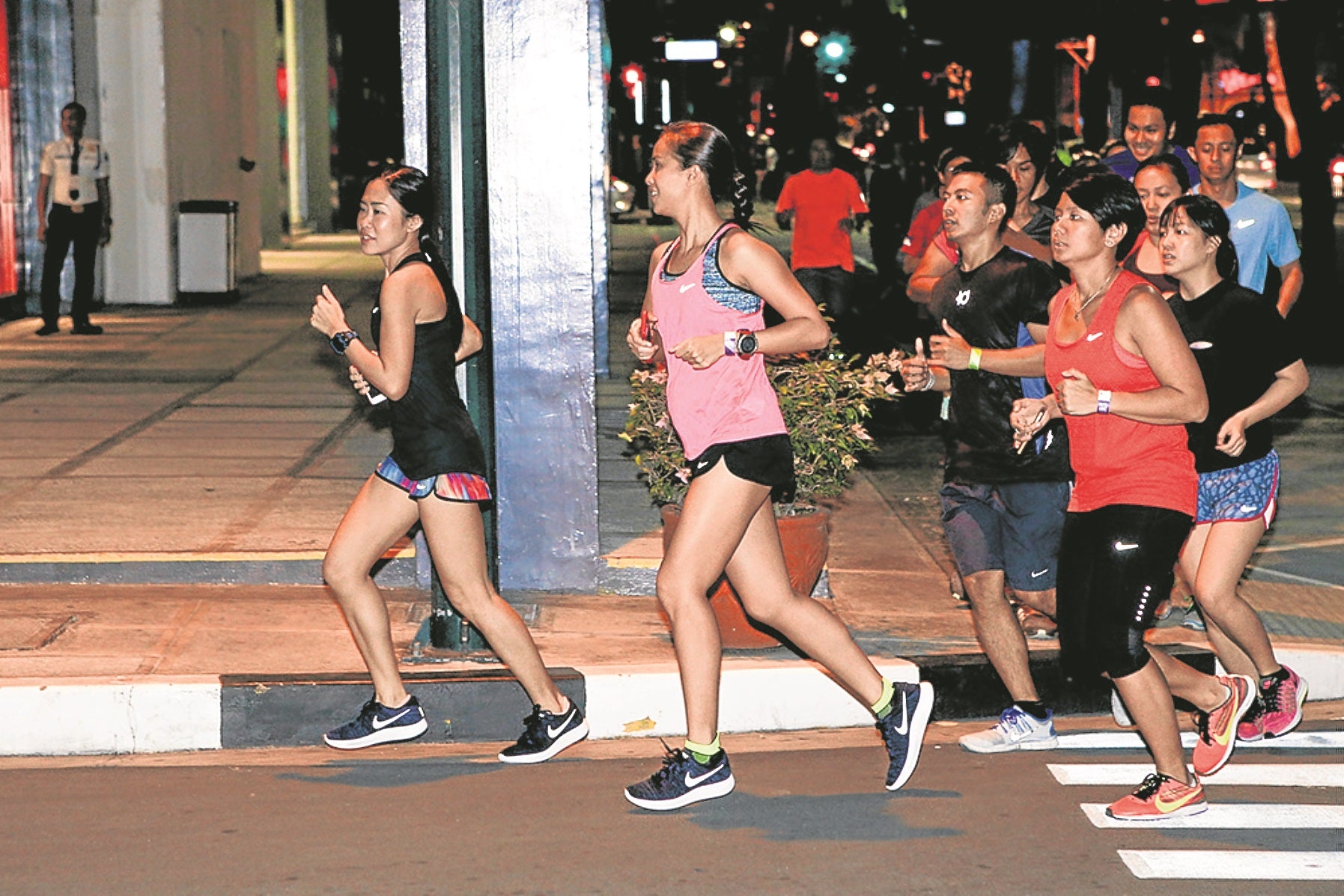 Six months ago, when I found out that exercise was good for my clinically depressed brain, I started running.

I ran so much that, for the first time in my life, I actually started sweating. Before I knew it, the seemingly impossible had happened: I had fallen in love with running.

I love running so much that, after a rainy evening trying to dodge creepy frogs at the UP oval, I decided to finally sign up for a gym membership because I needed 24/7 access to a treadmill.

I wanted to keep running, and slimy frogs weren’t going to stop me.

And when I told the gym girl that I had been running outside for two hours three times a week, she asked, sounding concerned, “Ma’am bakit po, ano pong gusto nating ma-achieve?”

Nothing. I just really enjoy running. And so when Nike Philippines invited me to join the Nike+ Run Club (NRC) one Thursday to test the LunarEpic Flyknit, I said yes immediately, even if I usually like running alone. Even if I worry that running in a group will bring out my ugly competitive side. (I have threatened to end friendships and love affairs over games of Monopoly.) Even if I wasn’t exactly in the best shape because my tattoo artist had banned me from working out for the past two weeks while my new tattoo was healing.

I arrived at Nike Park in Bonifacio High Street, changed into a Nike top and running shorts, and traded in my favorite Air Presto Ultra Flyknit for a pretty pink Lunar Epic Flyknit pair.

I joined the hordes of people who had shown up to be part of the Nike+ Run Club that evening.

Patrick Reyes, Nike Philippines country marketing manager, said, “Nike Run Club is Nike Running’s global service platform for runners. It serves and caters to runners of all levels, and it seeks to connect runners with professional training, professional coaching, services, products, everything in one package.”

Anyone can join NRC as they run on Tuesday and Thursday evenings, and get expert help from coaches and pacers at each session. They just need to register on the Nike website.

That Thursday was extra special because Nike launched the women’s LunarEpic FlyKnit Low—running shoes that are great for any kind of runner, whether a first-timer or an everyday, or competitive runner, according to Patrick.

“What makes it special is its vanishing fit and cushioning,” he said. “It’s recommended for the longer runs where you need a lot more cushioning. It has a pillow-like feel on the soles that really makes you feel like it’s a plush ride. It sits within the Run Easy silo of Nike. The proposition is that it makes a runner feel like he can literally run forever. Today, we want to ask you guys to try it yourselves. We encourage you to do a longer run so you can really feel the experience of running forever.”

“So maybe I should have signed up for the 5K,” I told Patrick.

“Can I still change?” I asked.

Thank god I didn’t. I had no idea how foolishly overconfident I was.

I had signed up for the 3km run that evening with the slowest group. “The sexiest?” one of the pacers asked.

“Um, the slowest pace?” I said, not sure if I heard her correctly.

She smiled. “Yeah, we call the slowest the sexiest.”

Soon people started taking off. I joined my group and before I could choose a playlist to run to, they had started running as well. I scrambled after them.

“Oh my god, you are so horrible at running that these shoes should be reviewing you instead of the other way around,” my internal monologue said, replacing my playlist.

And then we stopped. Apparently, that was just a warmup jog. And I was already out of breath. Great. We did stretches and exercises that challenged my inner klutz. I struggled to follow them, losing my balance multiple times.

Soon, we were running again. And again, I fell behind. Bonifacio Global City  was our oval and my biggest hurdles were the traffic lights.

At each one, our pacer Bea would urge us to make it before the lights changed colors so we could cross the street with the rest of the group.

“I hate you,” I muttered under my breath, feeling like keeling over. (I’m sorry, Bea. You are awesome and I’m a jerk.)

It was a lesson in humility. I was the slowest of the slow runners. But at least I wasn’t alone.

“It’s the first time I’m running in 10 years,” said a guy who was also struggling.

There was another girl, Leo, who looked like she was suffering as much as I was. “I’m so glad you’re here,” she said to me.

How’s that for a shoe review? I wanted to quit long before the shoes did.

Bea continued to shout encouragingly at us. “Let’s go! You can do it!”

“I swear, I’m going to hear her voice in my dreams tonight,” I told Leo.

“Seriously, why are you doing this?” my internal monologue had started again. “This is why we run alone. So we can stop whenever we want. So we can answer text messages while running if we had to.”

At one point, we ran past the Lamborghini store and I daydreamed about buying a car so I can drive myself back to Nike. But that daydream was cut short when I remembered that I don’t have money and I don’t know how to drive.

Bea soon fell into step beside us, keeping us motivated.

“Small steps, small steps,” she said, telling us to go to as slow as we had to without stopping. “It’s harder when you stop.”

I wanted to hug her for being so patient. She refused to leave us behind.

“You’re so close. You can do it,” Bea said, smiling encouragingly.

It was at that point that I entered the zone. I focused on the music in my ears, the rhythm of my feet, the breeze on my face. And I remembered why I loved running.

When we finally made it back to Nike Park, Leo turned to me, raising her hands in triumph and beaming widely.

I smiled back, thinking, this is why you join the run club. For that support. New friendships. And the experience of shared victories.

And the LunarEpic Flyknit? I sucked but it rocked. It offered such great support and cushion that, while the rest of my body hurt from the run, my feet were in great condition. They felt no pain at all.

The shoes were so comfy I was convinced that they could really run forever. But I couldn’t. At least, not yet. But I’m joining the Nike+ Run Club again.

And you should, too. I asked Patrick if he had tips for nervous first-timers. “Just go for it. You’re gonna enjoy it.”

Register for the Nike+ Club Run at nike.com/manila. The low version of the LunarEpic Flyknit for women is now available at Nike Stadium Glorietta and Nike Park The Fort.