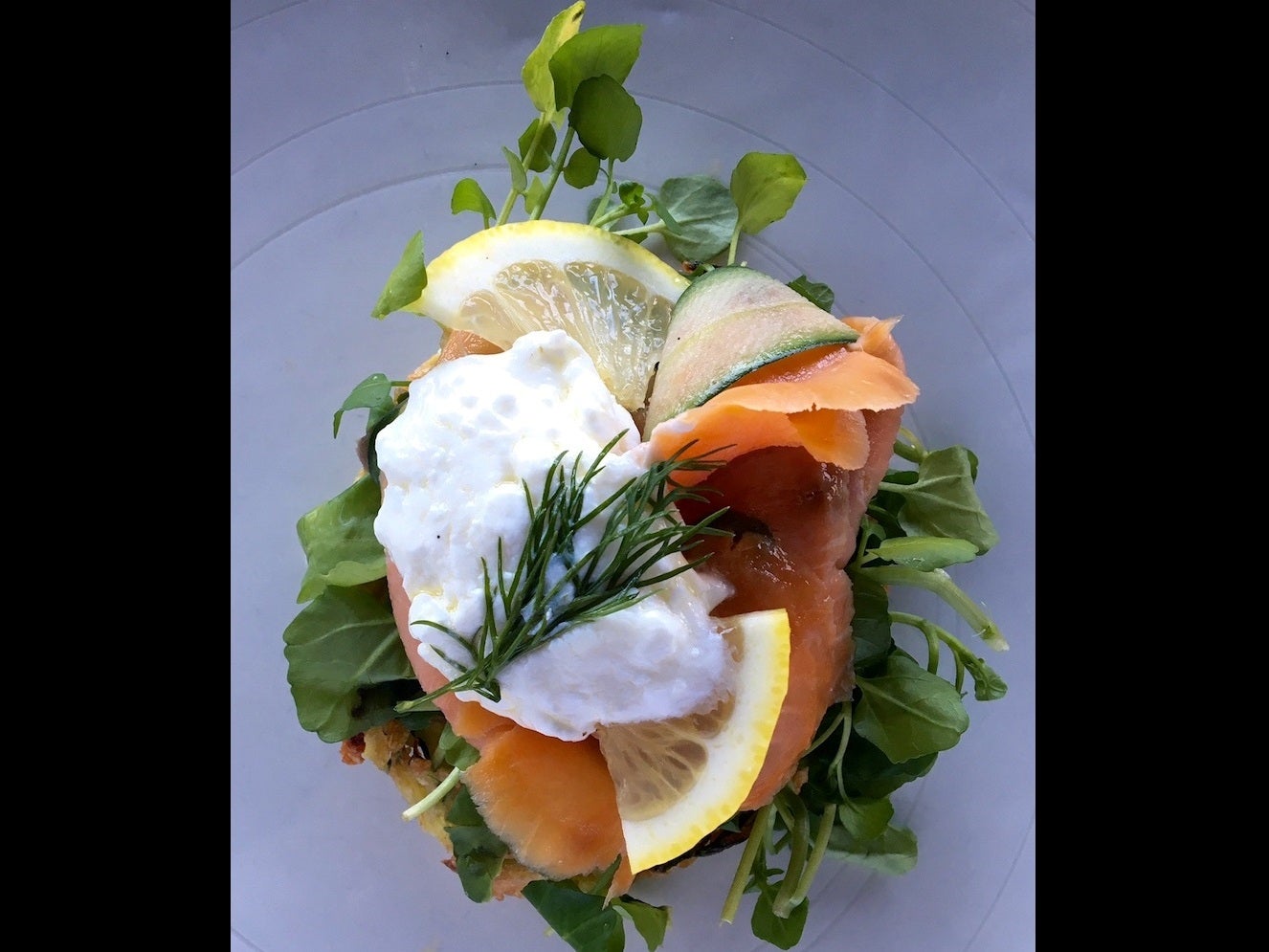 SALMON and zucchini "rosti," with zucchini at Como Shambhala in Ubud, Bali

You are what you eat.

“If we don’t eat well—food that’s very dehydrating—that’s not good for you,” said Dr. Howard Murad, founder of Murad skincare.

A medical doctor who found his calling in skincare, Murad believes that good skin starts from within.

“The body is constantly replacing damaged cells, and if we eat key food, we can protect and promote cellular health by keeping the body flooded with cell-protecting antioxidants,” Murad told GQ.

At a mini conference in Bali, he outlined the essentials of nutrition. “If we want to make everyone younger and healthier based on what we eat, (then) we should (consume) good amounts of water, whole grains, good fats and good proteins. Simple.”

The cupcake is a metaphor for satisfying sustenance, so consumers don’t feel deprived and, thus, more likely to binge on unhealthy fare.

The center of Murad’s recommended diet is on embryonic food, sustenance in its origin state.

“They seem to have more nutrients, and a bit of everything,” he explained. Take the egg, for example. It’s probably healthier for you to eat a whole egg, which will have the full nutritional complement from a chicken.

Sprouted grains, beans, seeds are all embryonic fare that he considers better for the body. Added benefit: They contain
collagen-boosting amino acids which aid in making skin look more youthful.

“Water passes through you,” said Murad. “What I want to do is maintain the water in the cell by having strong cell membranes that contain more water.”

So, to truly hydrate your body, Murad recommends a diet heavy in raw food and vegetables: “They mostly contain water and all kinds of vitamins, antioxidants, minerals.”

Cucumbers, tomatoes, watermelon and zucchini contain plenty of water and, as your body digests them, are more likely to stay in your system.

At a cooking class presided by Murad at Como Shambhala, a stunning wellness retreat in the hills of Ubud, he demonstrated a rather unusual cooking method.

“What do you never put in your omelette?” he asked. “How about sardines? Red rice?”

Murad then proceeded to add a mix of raw vegetables, like bell pepper and leeks, along with whole grains like cooked red rice and quinoa. For the unexpected, he added a helping of cooked oatmeal, as well as a helping of turmeric and ginger powder.

The results? A surprisingly mellow omelette that didn’t taste as odd as it sounded.

Murad himself has published several cookbooks.

“I always say, ‘Don’t follow the recipe!’ And people say,  ‘Why are you giving me a book with recipe if you don’t want me to follow it?’ The reason is I wanted you to build your recipe.”

In personalizing a recipe filled with things you enjoy and are healthy for you, he said you are more likely to repeat this pattern of eating well.