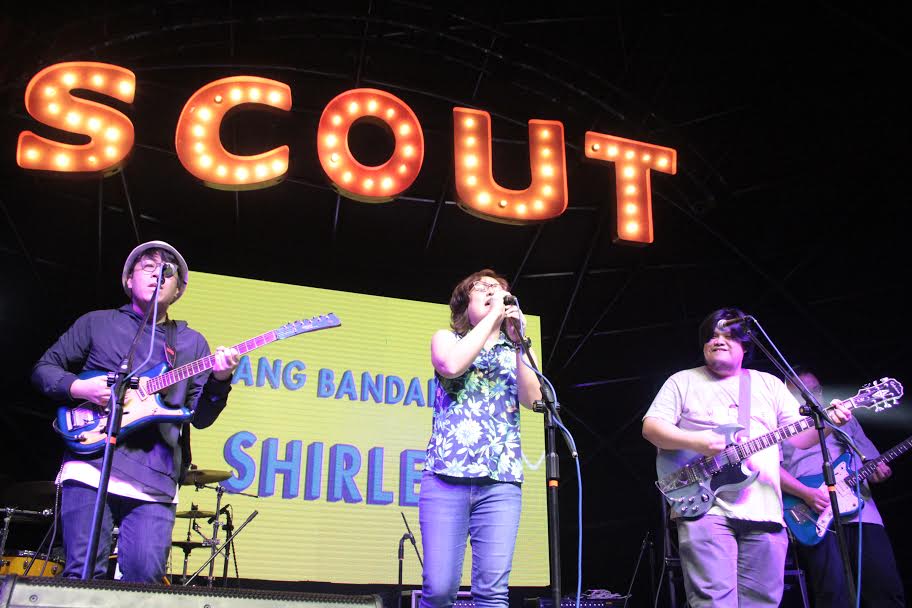 On stage at the Samsung Hall in SM Aura, the word “Scout” was lit up in red letters, Broadwaystyle.

There was no need to fine-tune the music blasting through the speakers, since most of the featured acts were performing for the third straight year. A number of them have evolved from being newbies in the indie scene to being bands with a big fan base.
Following their previous music festivals, Scout’s Honor and Scout House Party, the summer camp-theme event marked the free magazine’s second birthday last July 23.
It was the hottest party in the gig circuit last weekend, with a string of music sets that kept the young crowd from going anywhere else. Leading the roster of bands were Jensen and the Flips, The Ransom Collective, Ang Bandang Shirley, and Curtismith.
Welcoming Scout readers to the Samsung Hall lobby was the DJ Lounge, a separate ministage that featured electronica, hip hop and R&B. The likes of Olympia and Ninno Rodriguez ruled with raw, uncensored songs.
Helping set the mood were bands Tom’s Story, Run Dorothy, and Fools and Foes. They got the crowd—who had been seated on the floor like they were in a high school concert—standing up to enjoy the foot-stomping music.
It was the first time for the band Cheats to perform live its new song “Beg,” which gave a different kind of vibe but still with a power-pop jam and guitar fury.
Ang Bandang Shirley played “Di Na Babalik” and “Umaapaw” to the crowd’s delight. Frenetic energy The Ransom Collective’s playful strings and percussion helped deliver a frenetic sonic energy to its set. The band added to its repertoire—“Settled,” “Fools,” “Run,” “Images” and “Hither”—six more songs from an upcoming album to be released by the end of September.

“There are new songs and songs that most are familiar with. There’s a little bit more depth in this album compared to what we’ve put out so far,” band member Kian Ransom told Super.
“We experimented more with the recording process. We don’t play all at the same time when we go live, so we’ve added some twists when we play it and when we record it,” Muriel Gonzales added. Even The Ransom Collective’s original EP songs were re-recorded for its first full-length album. Serenade
Jensen and the Flips appeared on stage in matching crisp white shirts and ties, an outfit apt for a first date filled with good intentions. The band had the crowd swooning to songs from its 2015 album “Honeymoon.”
The smooth, six-song serenade stood out with a vocal style that was a mix of Jaymes Young, Charlie Puth and Bruno Mars, and included covers of “Is This Love” and “StayWith Me.”
Playing the hypnotic groove of “Dangerous,” the band let the crowd sing most of its snappy chorus before switching tempos with the funk-and-jazz track “Slow.”

It brought the energy back with “Lovechild,” with sounds reminiscent of vintage Motown, and then ended with “Crazy” as encore. Scout, dubbed as the “millennial’s magazine,” explores pop culture and promotes under-the-radar talent and creative projects.
The real treat of going to the Scout Summer Camp was getting first dibs on the mag’s July-August issue.
On the cover is the lovely young British-Filipino celebrity Yassi Pressman, captured on retro-style photos by Shaira Luna. The issue also features 20-something entrepreneurs behind currently hot hangout places such as The Lost Bread, RB City and Walrus.
Also on its pages are the stories behind the photographs of Kevin Kunishi and Aaron Quinto that need more telling, as well as art-fueled visuals and essays by artists Marika Callangan and Sofia and Monica Cope.