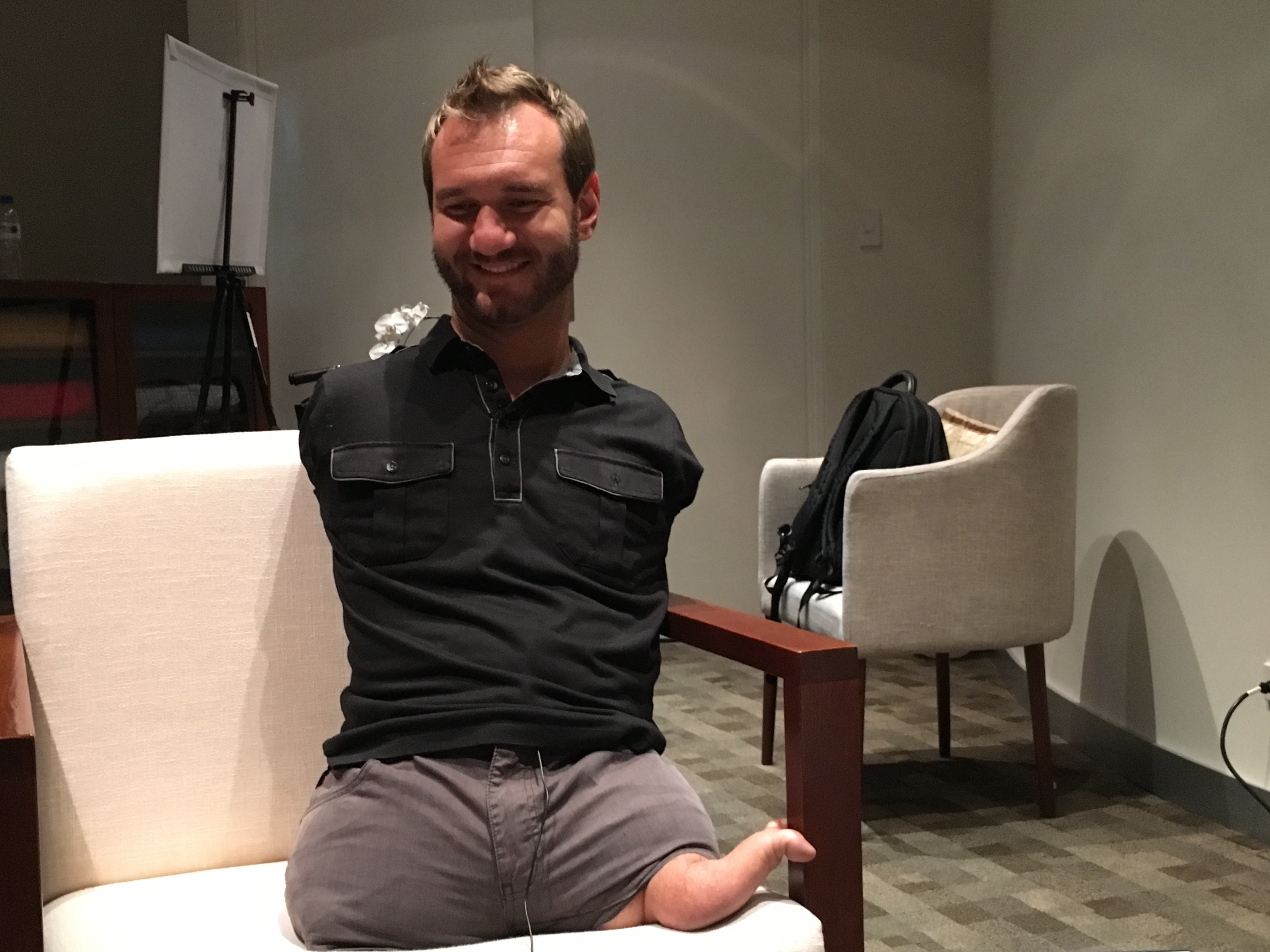 It was not until the age of six, when he started getting bullied and teased at school, that Nicholas James “Nick” Vujicic realized that he had no arms and legs.

The 33-year-old Australian motivational speaker was born with Phocomelia, a rare disorder characterized by the absence of limbs.

In a closed-door interview, Vujicic said all the bullying took its toll when he battled depression between the ages of 8 and 12. But for the limbless evangelist, his faith and his heart are bigger than any bully.

“It was difficult. [I dealt with it] one day at a time. I started realizing that the people who did bully me maybe have something going on in their own lives—that they feel control in some way, and they don’t feel like they control their own lives so they feel they have to control others. You don’t know who’s being bullied at home,” Vujicic told INQUIRER.net after his “Limitless Possibilities” event at Araneta Center, Quezon City.

“I started realizing I can confront them. I can tell them to stop,” he said.

Amid a cruel world that mocked his disability, Vujicic said he found comfort and acceptance in his own home, particularly through his parents, who made him realize that he was just as able and as special as others.

“My family life, my mom and dad, they definitely loved me and encouraged me that I’m beautiful just the way I am and that I don’t have to worry about what people think of me. That was really encouraging. So no matter what happens I know that I when I come home there’s refuge,” Vujicic said.

“My dad and my mom are definitely my inspiration when I was a kid, teenager. But my wife is the greatest inspiration of my life. She’s so gracious, she’s patient. She loves people more than I love people. She forgives faster. She’s a lot wiser. There’s so many thing about her to be admired,” he added.

But Vujicic said the turning point in his life did come until the age of 13, when he could not walk for three weeks after hurting his foot during a soccer game.

“[That’s when] I realized that I have a choice—that I don’t have to be angry for what I do not have and be thankful for what I have,” Vujicic said.

“I started speaking in front of people at the age of 17. I did about 12 speeches in two years. The impact was great and the feedback was great. Then I got a hug from a teenager who told me ‘no one has ever told me that he loves me and I’m just as beautiful the way I am.’ That’s when I knew I was going to be a speaker,” he added.

Touring the world with a personal mission to inspire others is not an easy task, especially given Vujicic’s physical condition. But he said what motivates him to continue doing what he does is his faith in God.

“My passion definitely comes from my faith in God and believing in heaven—in believing that when I speak in front of millions of people, lives are being challenged not only in a mental way but also spiritual. I think spiritual healing is the beginning of all healing,” he said.

“You can have all kinds of disablities that people can’t see, your spirit is disabled … If you could just be successful and ambitious then you could be happy. But I’ve seen so many ambitious and successful people who are happy for a only little bit then they are not happy anymore. Then they have to do something bigger and greater.”

Asked about the biggest challenge that he had to face so far, Vujicic said it was the daily struggle of handling too much on his plate—the desire to touch as many lives as he can without having to exhaust himself too much.

“I think the biggest challenge of my life really is trying to work on how much I do—traveling, speaking versus being at home yet still wanting to reach seven billion people. Creativity, thinking outside the box how on how we can inspire many people without having to travel so much,” Vujicic said, noting that he is fully himself at home doing nothing, going on movie dates with his wife, or playing with their boys.

“I think faith is the biggest thing. And when you see people’s lives being touched and being changed—they start looking for their purpose—that’s what motivates me as well,” he added.

Given all the difficulties that he had to bear while growing up limbless, Vujicic said he did not have that much fear anymore. But at this point, he shared he was afraid most to be too proud.

“[My biggest fear is] ever becoming prideful. I don’t want to be prideful and I say that humbly. I really thank God for every good thing that I have, give him all the thanks. But I think it’s really important to always be humble and remember those who have less than you,” he said.

Vujicic, despite his disability, continues to touch lives and move forward, and he wants others who are more physically able than him to be emboldened and do the same.

“Make the most out of it, but enjoy now,” he said, when asked what summarizes his perspective in life.

“You gotta do your best, God will do the rest. Do all that you can. Don’t be discouraged about your school work. Just because you’re not sure if you’re going to get a job … Do everything that you can because you don’t know what wave of opportunity might come, and at the same time the greatest medicine to your broken heart is to actually go out and try to help somebody else,” Vujicic said.