‘Ignacio de Loyola’: Why it had a ‘brain trust’ of Pinoy theater artists | Lifestyle.INQ ❮ ❯ 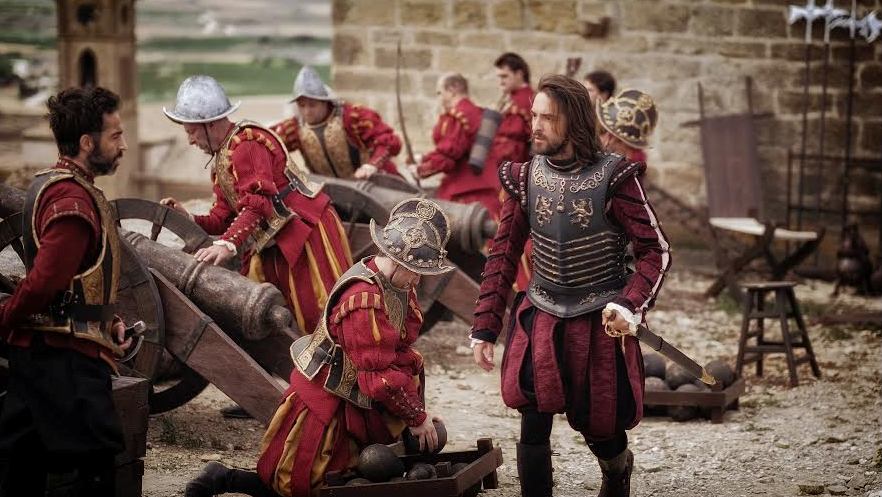 Scene from “Ignacio de Loyola,” a film that stars Spanish actors but is an all-Filipino production directed by Paolo Dy, with musical scoring by Ryan Cayabyab. PHOTO FROM JESUIT COMMUNICATIONS FOUNDATION

‘Ignacio de Loyola’: Why it had a ‘brain trust’ of Pinoy theater artists

Call it introspection captured in cinema.

That, essentially, is the journey that plays out in “Ignacio de Loyola,” the Jesuit Communications Foundation-produced period film currently playing in theaters about the playboy-aristocrat-soldier turned saint who founded the Society of Jesus, more known as the Jesuits of today.

While scenes of battle, sword training, and an Inquisition court provide authenticity to the film, the highlight of this story is Ignacio’s (Andreas Muñoz) inner triumph over the demons that had plagued his life. That soul-searching that leads from darkness to light, that runs like an undercurrent throughout the movie directed by Paolo Dy, is traceable to a specific root: The preparatory work made by stage actors before the first-ever scene was shot.

Dy, known for his commercial work on videos and advertising, found able assistance through his wife, respected actress Cathy Azanza-Dy, who had appeared in dozens of Repertory Philippines plays before motherhood led to a temporary break.

“Before, I’d look into the externals as a director,” says Dy. “Cathy let me into the world of acting, and she introduced me to the level of craft that would build the character. In this film, in particular, we had to explore character motivation and relationships and make the characters more human.”

Humanity was the one element that Dy and his Jesuit producers wanted to emphasize. They wanted a protagonist that the audience could identify with. The young Ignacio, prior to forming the Society of Jesus, was more “sinner than saint.” The neglected youngest son of a  Spanish aristocratic clan, he had a huge chip on his shoulder and was driven to prove himself by reaching heights of glory.

Winning a war or dying in it was his only purpose in life. Along the way, he wined, dined, and had his way with women, in the time-honored tradition heartily observed by young nobles of that time. It took a crippling cannonball-inflicted leg wound and the cessation of all hostilities with France to stop him in his tracks and radically force him to re-evaluate his life.

Spanish actor Muñoz has the right combination of dashing arrogance, good looks, and an analytical tendency to look within. “We needed an actor who could process all that,” says Dy. “He had to be fiery but with an intellectual side. Malalim, pero may side na may pagka-gago, like he will dive into a battle head first.”

It helped that Muñoz was a stage actor. He was doing “Hamlet” when he got the call to audition for the team who was doing preproduction work in Spain at that time. To prepare for the role, he learned to fence at the Real Escuela Superior De Arte Dramático, and took up other ways of fighting at the Royal Conservatoire of Scotland.

But the most challenging part in the film came at the end, when the now penitent Ignacio suffered a breakdown that almost caused him to take his life.

“Ignacio stayed in a cave near the town of Manresa for 10 months where he went through self-mortification,” Dy says. “Not everyone knows this, but he went into what we would label now as a major depressive state. It was in that cave that he had to determine the voices that he had to listen to, or how he would see the movements that played out in his life. Do these things bring him closer to God or do they move him away?”

Humanity, not treacle or preachiness, was also what had to come out in these moments in the film. Long before the shoot started, Azanza-Dy brought in friends from the Philippine theater community to help develop and flesh out the script, which Dy wrote.

“Luna Inocian read the script and gave her comments,” says Azanza-Dy. “Friends like Jenny Jamora, Topper Fabregas and Steve Cadd, among others, did the table reading here in Manila while we were refining. They pointed out the strengths in the scenes or advised where certain elements could be let go. They also strengthened each character’s arc. During the table reading, it helped to hear the words said out loud prior to finalizing the shooting.”

These theater friends became an “extended brain trust, and we wanted their input,” says Dy. “Stage discipline is of a very different order. These actors fight to create a character, sustain it during the duration of a show, and really jump into it.”

The all-Spanish cast—Javier Godino, Isabel Garcia Lorca, Pepe Ocio and others who play Ignacio’s family, friends and rivals—also have their roots in theater. Dy and his all-Filipino crew did a two-month shoot in Spain and a few days in the Philippines.

The locations were basically the saint’s old stomping grounds, such as the Navarre countryside, his childhood home town in Loyola, and the the Basilica of St. Ignatius, which now houses the original family ancestral home.

The production elements also incorporated theatrical traditions. “The costumes didn’t just have to look beautiful or historically accurate,” says Dy. “They had to conform to character. The color styles that the characters wear had to reflect their personality. Ignacio’s more freewheeling cousin Santi had to look more casual, while Ignacio, who was vain, had to have every button in place.”

“We also made the dance scene between Ignacio and his crush, the Princess Catalina, very theatrical,” says Azanza-Dy. As filmed in the movie, it cements a supposed lifelong trust between the daughter of the king and the then-rising chivalrous knight who saw her as the lady he would fight for.

The establishment of that trust had to be credible, to make real the inspiration Catalina’s letter to Ignacio would provide him during his incarceration, despite the passage of many years.

Dy and company had to maximize every cent of the film’s relatively meager P50-million budget to bring to life 16th-century Spain. That was another part where stage discipline kicked in.

“People think we had a grand shoot because we spent a few months in Spain,” says Dy, laughing. “They have this idea that we spent our time in the best hotels drinking the best wine. But we had to maximize our resources. There were times that we had to shoot in the middle of nowhere. And if they still don’t believe me, I show them this”
—he whips out from his cell phone an image of what appears to be a small, cramped wooden hut where they had stayed for a time.

But, he says, the experience is more than worth it.

“Ignacio de Loyola” will be shown in Jesuit communities and universities around the world. If audiences embrace the film, a sequel might be in the making—this time on Ignacio’s bosom brother and cofounder, Francis Xavier, who brought the faith and the society to Asia. Trust theater actors to do prep work for that movie, too.