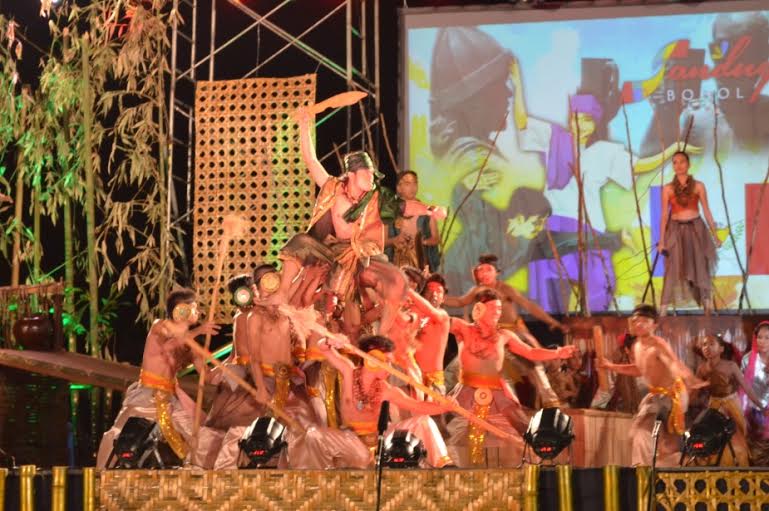 COMPLAINING that the yearly festival commemorating the historic Blood Compact between the Philippines and Spain has degenerated through the years into banal entertainment, organizers said they have tried to make the Sinulog more rooted in Bohol’s rich history and heritage.

Lamenting that the Sandugo has turned into a copycat of Cebu’s Sinulog, making it “a little impoverished twin brother,” Sandugo 2016 artistic committee head Lutgardo Labad said this year’s festival has focused on local cultural forms and crafts as an expression of Boholanos’ innate artistry and originality.

Instead of a street-dance competition à la Sinulog and Panay’s “Ati-atihan,” Labad said Sandugo 2016 used the native Kuradang dance “as the main basis and inspiration for this year’s contest, being the most local of Boholano traditional dance expressions.”

He explained that with the adoption of Kuradang, Bohol would be forced to develop its own aesthetics and there would be no need to “import” directors, choreographers and designers from the neighboring Cebu and Tacloban cities as in the past Sandugo festivals.

Likewise, Labad said there would be renewed emphasis on the Blood Compact, the historic concord of peace between Spanish Miguel Lopez de Legazpi and Bohol chieftain Sikatuna in 1565.

“Sandugo therefore looks at the Blood Compact as the most important historical event in the province that is worth memorializing,” explained Labad, an award-winning musician and movie music scorer.

Kuradang, according to historian and former Bohol Arts and Cultural Heritage Council chair Marianito Luspo, is a native Visayan dance practiced in Bohol, Cebu, Leyte and Panay, which he theorized as sinu’og or Sinulog in its purest form.

“This is the true ancestral dance of the Visayans, performed to the accompaniment of such percussion instruments as the drum and the gong, and set to the 2/2 time signature that is truly reflective of ethnic music,” Luspo said. “It does not have a fixed pattern of movement, thus (giving allowance for) improvisations, the same way Visayan poetry unravels verses.”

What’s unique about Bohol is that kuradang is widely practiced there and has become part of daily celebrations, from house blessings to weddings, the historian said.

Luspo explained the adoption of the dance is part of Bohol’s “self-discovery” as a people.

Luspo, part of the organizing committee, told the Inquirer that local crafts were utilized in the 2016 Sandugo, such as the footwear called “zapatilla” from a shoemaker in Tagbilaran. This would help revive the industry, he added.

“If we have to celebrate, we have to benefit the local economy,” he said of the event supported in part by the National Commission for Culture and the Arts.

Luspo added that the festival sought to be participatory.

“This dance, enriched by Western tradition, is really an expression of the whole sociological, historical and cultural streams that converge into what we are now—the Boholanos of today,” he said.

Street dancing committee chair and kuradang dancer Carmen Gatad said what made Sandugo distinct from Sinulog is that it is a festival based on a historical event, while the former is religious in nature.

She explained that the organizers stopped the use of the Sinulog beat in the competitions and began using kuradang music instead.

Bohol Gov. Edgar Chatto said to call Sandugo a historical or a cultural event would be an understatement. “It is more than that. It is the whole spirit of being a Boholano—resilient, industrious, very loyal and very conscious of what our collective dreams are.”

Chatto stressed that Bohol was not promoting its culture for tourism and commercialism.

“We promote culture as culture,” the governor said. “We promote it as the identity of the people and the place. If tourism benefits out of a rich culture, then that should only be an effect, not the cause.”

“So it’s not tourism and then develop culture because you want your tourism to grow on a bigger scale. That is the wrong way of appreciating it,” he added.

Chatto also emphasized his administration was for the conservation and promotion of Bohol’s heritage “because that is what the people would like to see.”

“They should know themselves. We should know ourselves. And that is our identity. That is our motivation, not tourism,” the Bohol governor said.