The death of an invisible man | Inquirer Lifestyle ❮ ❯ 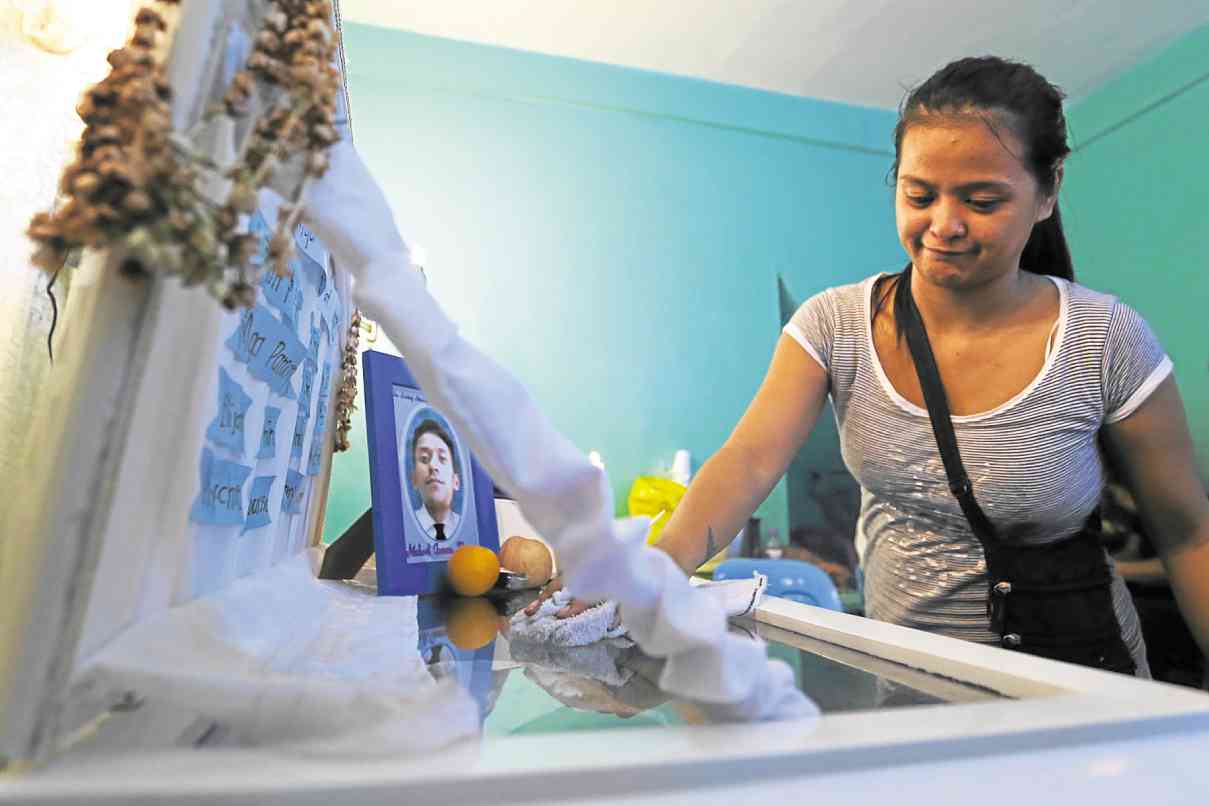 JENNELYNOlaires before the coffin of her partner,Michael Siaron, during the wake at barangay hall in Pasay RAFFY LERMA

The death of an invisible man

In life, Michael Siaron was all but invisible, just one of the faceless masses barely getting by on the mean streets of Metro Manila.

He belonged to the urban poor, a kind that more fortunate Filipinos run into every day but don’t really see, because they’ve learned to tune it out of their consciousness, along with the smell of open sewers, the noise of traffic and other unpleasant facts of daily life in the city.

Ironically, it was in death that Siaron was finally made visible by those who erased him from his existence.

The unknown gunmen who killed him last July 23 left his bloody corpse on the highway for all to see. They sought to reduce him to a word hastily scribbled on a scrap of cardboard. But, in doing so, they also gave him a face. They made him visible.

It was through Inquirer photographer Raffy Lerma’s lens that many of his fellow Filipinos finally saw Siaron, splashed across the front page the following morning in the indelible image of Siaron’s live-in partner, Jennilyn Olayres, who was hysterical with grief, clutching his lifeless body.

READ: The story behind the viral photo

It was an image that, once seen, could not be unseen.

President Duterte certainly saw it. He testified to the power of the image when he mentioned it in his State of the Nation speech the following day:

“And you are portrayed in a broadsheet na parang Mother Mary cradling the dead cadaver of Jesus Christ,” he said, no doubt referring to Michelangelo’s “Pieta.” “E ’yang mga ’yan, magka-dramahan tayo dito.”

Now that the photograph has gone viral on the internet, Siaron’s image in death has been seen not only in the country, but globally as the international media picks up on the story, the very real face of Duterte’s war on drugs.

Under the LRT tracks

Siaron’s 29-year sojourn in this world has ended in a plain white coffin in a cramped barangay hall under the LRT tracks, along the very side streets of Sto. Niño, Pasay City, where he lived and grew up.

It is only now that the bare facts of his relatively short life are becoming known.

It isn’t sympathy or pity that she wants, says Jennilyn Olayres. It’s not even justice.

Yes, she admits, he did use drugs, methamphetamine or shabu to be exact.  But he was never a pusher, she stresses.

People who are quick to judge, who readily believe the words scrawled on a piece of cardboard, can’t know who her husband really was.

Siaron was the eldest of four children.  His father, Solomon, sells fruits from a pushcart along Taft Avenue. His mother, Emily, has worked in Bahrain for the last 15 years, most recently as a janitress in a mall. But even with the money she sends home, the family is barely scraping by.

He never finished high school, having dropped out in his fourth year.

He had always been thin, and in poor health from a bout of leptospirosis when he was younger. He sometimes found it hard to breathe.

He had an 11-year-old son named Harry from a previous relationship. His ex has since married, but Siaron tried to remain close to his son.

He had worked for a time in a restaurant, his last steady job. But, since then, he had to work odd jobs to survive. Sometimes he worked as a day laborer. Other times he helped paint houses.

Lately, he had been pedaling a sidecar part-time, taking home a measly P200 at most, of which he had to pay P60 for the “boundary.”

Jennilyn, five years younger, grew up in the same neighborhood, the fourth in a brood of 10.  Her father also pedals a sidecar for a living.

They had been together for three years—“three years and one month noong Lunes,” she says.

They had wanted to have a child of their own, but she had a miscarriage, she explains.

They lived in a shack—actually a tiny storeroom along a garbage-strewn creek—that they rent for P500 a month. Siaron had done his best to fix it up, but the roof still leaks and the walls are full of holes, and there is no toilet and no running water.

On the surface, it looks like a pretty bleak existence. But it wasn’t without its joys.

She describes someone who is far from the drug-crazed maniac that his killers wanted the world to believe.

“Joker, mapagbiro sa tao, masayahin—ayaw niya ng gulo (He loved to joke; he was cheerful. He didn’t like trouble) ,” she says.

Sometimes he would take a broom, pretend it was a microphone and sing to make her laugh.

She had been the wild child when she was younger and hung out on the streets, as her numerous tattoos attest.  When they fought, he was the one on the receiving end. It was Siaron who had been the taming influence. She learned to cook rice and clean house because of him, she says.

When they had the chance to watch TV, she recalls, he preferred documentaries like those of Jessica Soho and Kara David, or shows about nature and wildlife, a view of the wider world beyond their narrow existence.

When she learned that Siaron had been shot, she ran barefoot from their shack all the way to Pasay Rotonda, and broke through the police cordon to get to his body.

As far as she knows, Siaron had voted for Rodrigo Duterte. TVJ

Church: Thou shall not kill