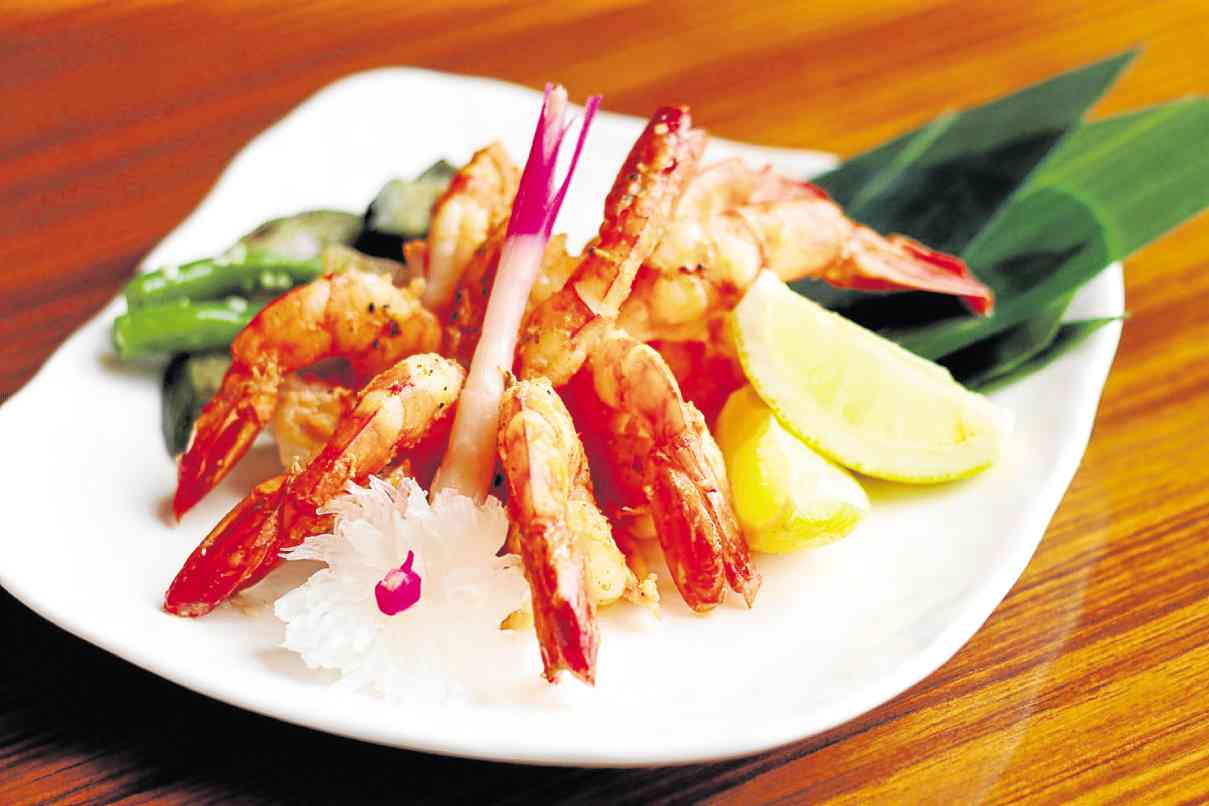 Fresh seafood is a given at Yakumi, the chic Japanese restaurant at Solaire Resort and Casino. But its Saturday brunch buffet also offers unlimited champagne and sake, mini ramen, house-made ice cream and sorbets.

By the entrance, we spotted large whole salmon and tuna imported from Tsukiji Fish Market in Tokyo. These are made into sushis and grills in the island kitchen.

Yakumi, which means “spices or condiments,” is a Japanese fusion restaurant that combines modern culinary techniques and traditional ingredients.

One example is the fresh wasabi root crop grated into a potent and flavorful paste. It has a clean, almost herbal taste without the harsh heat of the “fake” wasabi made of horseradish.

There are four stations manned by executive chef Norimasa Kosaka and his team: Cold Salad; Teppanyaki Station; Sushi and Sashimi; and Robatayaki, a Japanese style of grilling.

We start with a sushi and sashimi platter. The salmon slivers are so fresh they almost melt in the mouth with the grated wasabi and soy sauce. Try the tuna and lapu-lapu sashimi, and the Crazy Roll sushi topped with spicy Japanese mayo.

The tempuras are fried upon order, which ensures that the diners get them hot and crispy. Choices are prawn, white fish, sweet potato, eggplant and carrot.

Small ramen bowls are also made to order, letting one have a ramen sampler with three kinds of broths: shoyu, miso and tonkotsu.

Rib-eye steak is served cubed, teppanyaki-style, which goes well with the al-dente yaki udon or the hard-to-resist Japanese fried rice.

Rice is usually dodged in any buffet, but we are enticed by the fried rice station where one can customize an order, and chef Jun Magdadaro insists it’s so much better if tossed with an egg.

Head over to the grilling station for some grilled tiger prawns, their shells and heads intact for that briny flavor, and the chicken teriyaki that isn’t drowning in sauce, just subtly sweet and a bit crisp.

On one side of the buffet are fried favorites: Pork Cutlet, Crispy Fried Chicken, Deep-Fried Tofu, Deep-Fried Eggplant with Soya Broth.

Balancing all these is the salad counter—Green Beans with Sesame, Seaweed Salad, Potato Salad with Japanese Mayo.

We get curious about a braised pork belly dish called Buta Kakuni; it’s like the Pinoy hamonado but yummier and deadlier—both in flavor and fat content.

Beside it is a safer choice, the cubed Blue Marlin Fillet skewered with red and green bell peppers.

The Yakumi buffet is for families who enjoy long lunches to catch up, says Joy Wassmer, Solaire director of communications.

For an additional P688+, diners can pair their food with endless sake, champagne, red and white wine, and Sapporo Beer, a Japanese premium lager. A booze trolley goes around serving these from an ice bucket.

Other items unique to Yakumi are the Ramen Salada, a cold pasta similar to cold soba, and Seafood Nanbanzuke, fried fish in vinegar and onion in small bowls.

Also try the Japanese Curry which can be had with the grilled fish and meats.

There are fresh fruits and sweets at the dessert station, but our favorite is the one served in a shot glass: the Strawberry Sake, Yuzu and Red Shiso, a creamy mousse with a kick of sake.

And there’s the ice cream bar. After a good meal, have some ice cream with these flavors to choose from: Ube, Sweet Corn, Green Tea, Mango, Coffee, Buko Lychee, Calamansi, Sesame and Cheesecake.