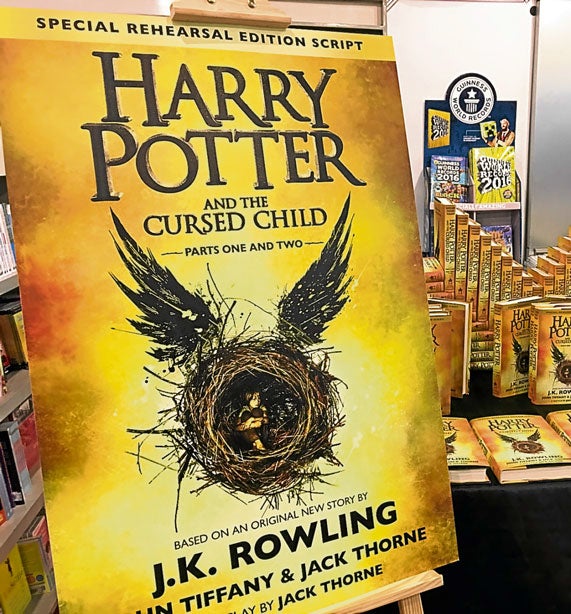 #RELIVETHEMAGICATNBS. Harry Potter fans had a blast at National Book Store’s unveiling of “Harry Potter and the Cursed Child.” PHOTOS BY TATIN YANG

Anyone who’s spent time in the wizarding world of Harry Potter knows the sheer, indescribable delight of the Potterverse—the characters, settings, stories and magic have created legions of fans across different generations. Saying goodbye to a middle-aged Harry Potter as he sent off his own children to Hogwarts in the seventh and final book was a bittersweet letting go that was so hard to do.

When “Harry Potter and the Cursed Child” was announced, Potterheads around the world rejoiced. Though it wasn’t technically a novel, “Cursed Child” was going to be a two-part West End play whose story picks up 19 years after the Battle of Hogwarts. The story was from J.K. Rowling, but the play itself was written by Jack Thorne.

To discuss the plot would be to give away spoilers, and we want you to discover the magic unsullied for yourself, so we will tread lightly.

In “Cursed Child,” our favorite intrepid students are now honest-to-goodness grownups, with real jobs, spouses, mortgages (or maybe not, as it is a magical world after all), and children. It introduces us to the next generation of young wizards and how they navigate through their own Hogwarts experience.

This is a story that, for all intents and purposes, was unnecessary, since we did leave the Boy Who Lived in a happy place, but we’re not complaining. “Cursed Child” will resonate deeply with the earlier readers of Harry Potter, those who grew up alongside the young wizard who are now adults themselves, dealing with the realities and disappointments of adult life (something a wand cannot magic away, no matter how powerful you are).

Harry Potter as a young wizard had always lived a charmed life despite the heavy burden thrust upon him to save the wizarding world from the dark tyranny of Lord Voldemort. From the Boy Who Lived to the Man Who Is, the shift in perspective is dramatic. As a father struggling to understand his troubled son, he is at a loss. As an employee behind on his paperwork, he is entirely relatable.

He is now a man trying to get under the shadow of his own legend, something he and everyone close to him—his children especially—have to deal with all their lives. Even in real life, Harry Potter’s shadow looms large. J.K. Rowling has been writing nonmagical stories, perhaps in an attempt to prove to herself (and to others) that there is more to her than Potter. (She doesn’t need to, though; we’d gladly gobble up anything related to the wizarding world that she brilliantly brings to life every time.)

Despite “Harry Potter” being a series targeted for children, J.K. Rowling was never afraid to explore darker themes, and now, in a story meant for adults, the play mixes the escapist magic we love with a heavy dose of reality.

“Cursed Child” seemed like a risky effort at first; why tarnish the memory of Harry Potter by showing his frailties as an adult? And yet it worked. It gave Harry a depth that will make you appreciate the seven books even more.

Fans will love how this feels like a reunion and a delightful “where are they now” story (incidentally, crossover fans of Rainbow Rowell’s “Carry On” will rejoice at one of the major developments in “Cursed Child”) that will have you clamoring for more. Though Rowling said that this would be the last story and that she is reportedly done with Harry Potter, we know how hard it is to forget your first love, and we hope that the wizarding world will be a siren’s call she won’t be able to resist once more.