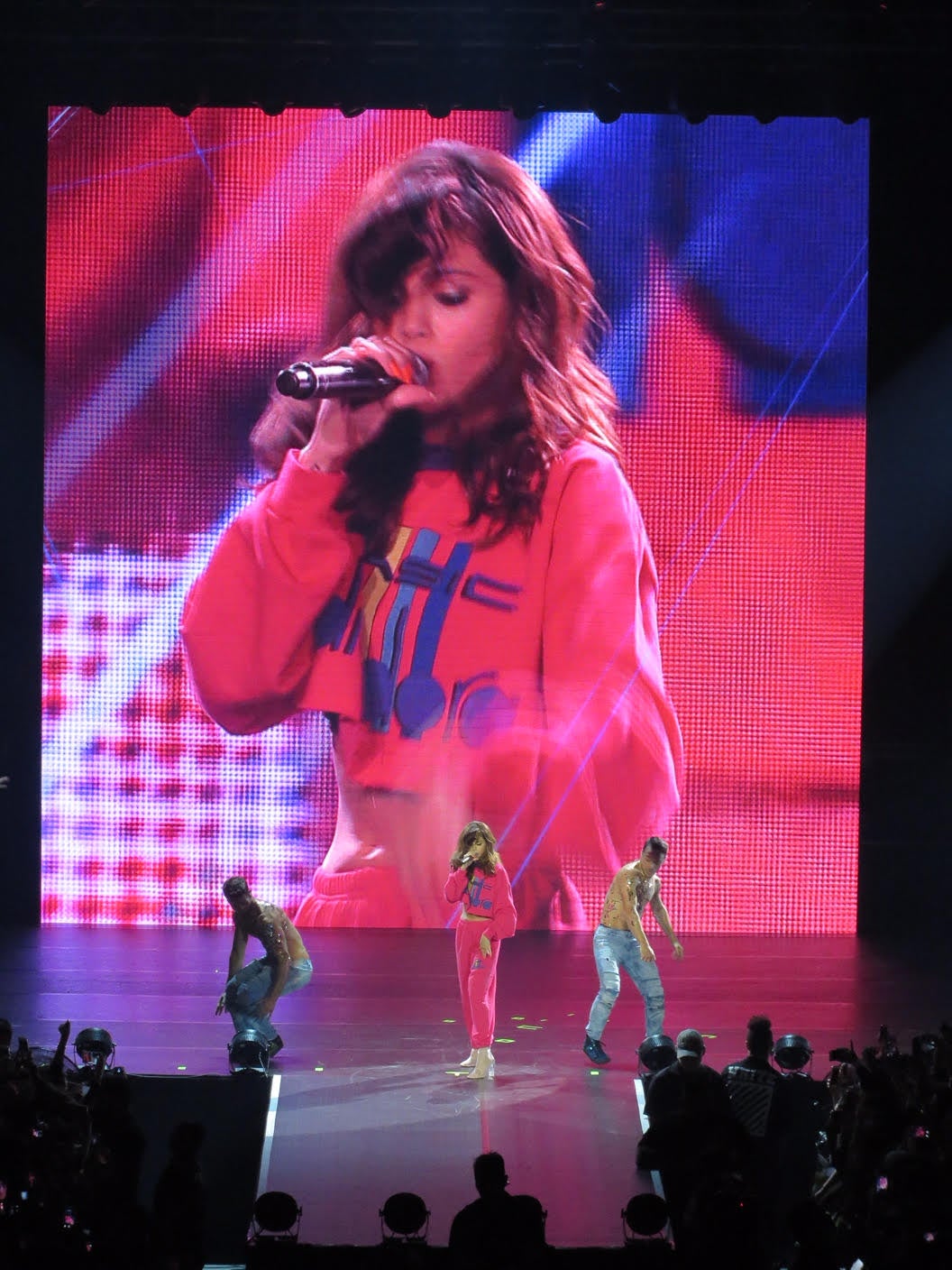 Selena Gomez didn’t cancel this time–and I lost it

My trip to Manila to catch Selena Gomez’s “Revival” tour stop was plagued with anxiety.

Here’s why: In 2014, I booked a trip from Hanoi (where I was based) to Manila for the Philippine leg of her “Stars Dance” tour, but Selena cancelled the concert for “personal reasons.”

This time, I was coming from Davao. It didn’t help that my flight was delayed and news about a looming storm was broadcast on an airport TV.

I overcame stress by taking the advice of my ever-wise best friend Karla: defy logic and think stubborn positive.

My pre-concert ritual was mostly checking weather updates, while playing “Revival” on Spotify. “Selena won’t cancel, not even in this weather,” I told myself.

I arrived at the Mall of Asia Arena early and killed time by listening to more Selena songs. It was 7 p.m. and raining hard outside.

A group of girls at the lobby gamely posed for photos, sharing their Selena excitement along the way.

Other fans (hello, Selena Gomez groups on Facebook!) echoed the sentiment about the cancellation. “I cried… May alkansiya ako para doon,” said Charmaine.

Fans queued at a Smart karaoke booth and belted out Selena’s top hits as pre-concert warm-up. Some were taking selfies with Pantene’s Selena standee. I shamelessly waited for my turn.

Others were lining up to buy official merchandise, immediately wearing their new bandanas and bracelets.

Fans came in droves (including dudes who proudly wore Selena shirts) and in distinct Selena fashion: “Revival” shirts or black tops, ripped skinny jeans or denim shorts, and bandanas that I wish I could also wear.

Screams filled the arena when tall ladies, who appeared to be backup singers, entered the stage.

The crowd roared louder when tracks from the “Revival” album started playing. She could be heard singing the first few lyrics off the stage, and when she appeared, I couldn’t remember doing anything but scream.

I think I also forgot to breathe.

As Selena segued to perform “Same Old Love” and “Come and Get It,” the shrieks (including mine), went louder.

“I think this has got to be the loudest crowd I’ve ever been in,” Selena said, expressing delight to be finally in Manila.

From her leather ensemble, Selena changed into an odd but still strikingly sexy outfit of a black velvet coat, knee-high boots and Muay Thai shorts.

The set of songs that she performed next were fit for dancing (especially “Slow Down”).

And then she took us on a throwback trip with songs from her old albums.

“It feels so crazy to be here,” she said. “I figured I’d do a little throwback for you.”

She did a nostalgic performance of “Love You Like A Love Song,” but it was when she sang “Who Says” that I lost it: I cried and laughed and sang with her like nothing else mattered in the world.

Selena also did a cover of a Hillsong worship song, “Transfiguration.” She also gave us a preview of her next album through “Feel Me.”

She said, “Whenever I feel frustrated, I write…”

Roses and skulls became the motif of her next set. Selena connected with her fans who grew up with her and embraced daring stunts by striking a balance between sexy and cute.

She wore a fitting mesh top with a snakeskin-like panel on the chest as she sang “Me & My Girls” against intense visuals and giant inflated roses suspended in the air.

Love was also in the air when Selena said, “Mahal kita. I guarantee you, we will be back.”

That came to me with jolts of heartache because it signaled the concert’s end. But not before she did “Kill Them with Kindness” in a bright pink outfit.

The moments seemed to linger as fans partied with Selena one more time with a cover, “Sweet Dreams,” Zedd’s “I Want You To Know,” and a remix of “Revival.”

She left the stage with no drama. And, just like that, the show was over.