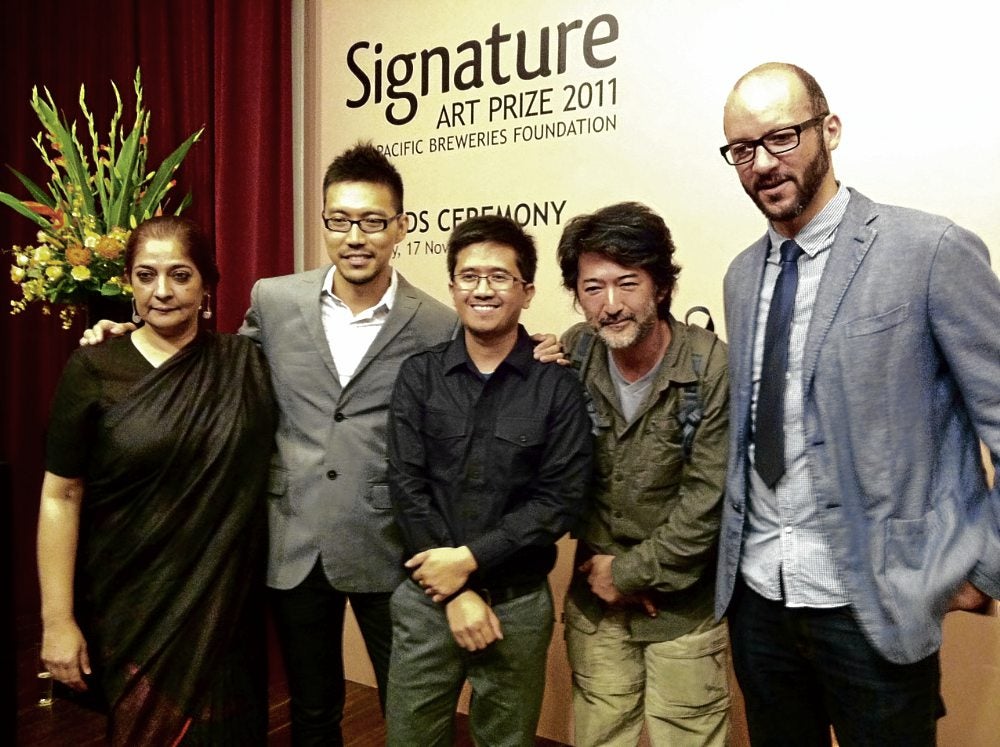 The triumph of painting in Signature international art awards 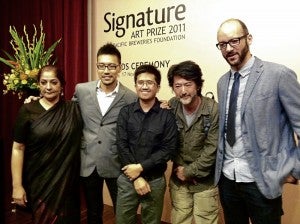 The victory of young Filipino artist Rodel Tapaya in the Signature Art Prize international contest in Singapore last Thursday sends a clear message: Painting is back, and if Conceptualism has not exactly overstayed its welcome, it can really get boring and predictable sometimes.

It bested 14 other mainly large-scale artworks from 14 other countries across the Asia-Pacific. The short list of finalists had been selected from 130 works which were nominated from 24 countries by art experts.

“With its multiple narratives and diverse allegorical references, this stunning mural-sized painting embodies a vibrant strain in contemporary art from the Asia-Pacific region,” the international jury said. “While Tapaya does not shy away from drawing on the folklore of his native region, his is neither a naïve nor self-exoticizing practice. The artist is audacious in his use of the Philippine mural tradition as well as Latin American magic realism and Bosch-like phantasmagoria.”

Drawing on his skills at draftsmanship, composition and color, Tapaya deftly wove diverse mythologies and folklore on canvas in order to constitute a central narrative on nature and its sacredness, and why man can ignore this only at his peril. 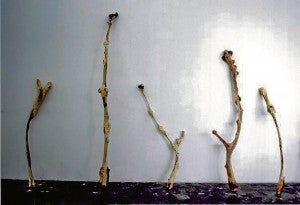 Tapaya’s work combines sublime artistry and significant content. He does not balk at making grand statements or even pointing out moral lessons. He does not shirk from exhortation. Compared with him, Conceptualism is weak-kneed. Always staying on the safe ground of irony and self-disparagement, Conceptualism is immature and childish. It’s cowardice masquerading as art.

Of course, some of the above is hyperbole. But if there’s one thing that the international jury is signaling with Tapaya’s victory, it’s that painting remains the key barometer of real artistry. Against a slew of self-conscious video and photographic works, Tapaya’s acrylic-on-canvas mural prevailed. The old verities have been reestablished; they remain perennial as the grass.

The message is more than buttressed when another painting, Aida Makoto’s 300 x 700-cm acrylic-on-canvas “Ash Color Mountain,” won one of the three Jury Prizes. Perfectly melding painting craftsmanship and artistic conceptualism, the mural takes from the traditional Japanese landscape genre known as san suga in which the mountain is presented in all its misty and dreamy loveliness: This is the sight from afar as one approaches the work. But when one gets near, one gasps at the details of the mountain: Like pointillist dots, the mountain is made up of salaried Japanese men who literally form the backbone of the roaring Japanese economy now come to an apparent standstill because of the global financial crisis. 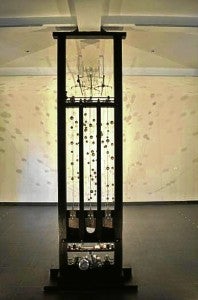 The mountain becomes a garbage dump of white-collar workers and the detritus of daily office life—desks, wires, computer units. The tranquil landscape transforms into something disturbing, even terrifying. The “ash” in the title may even suggest the nuclear ash from the meltdown of several of Japan’s nuclear-power plants as a result of the tsunami and earthquake early this year.

Korean Kim Jongku similarly attempts to update traditional Asian art in his “Mobile Landscape,” in which he uses steel powder ground from a steel pole to make calligraphic texts on a giant paper roll on the floor; the markings are caught by a floor-level CCTV camera. When the images are flashed on screen, the texts become landscapes, a tranquil and artistic sleight-of-hand achieved by combining the traditional with the technological.

The other Korean finalist, Kyungah Ham, experimented with the creative process by sending messengers to North Korean territory in search of native embroiderers who could execute her designs which she made digitally.

Some of the messages were interception by the North Korean authorities and those that managed to evade were made into embroidered works on silk. This is what may be called as the art of the cloak-and-dagger. But some things get lost in translation. 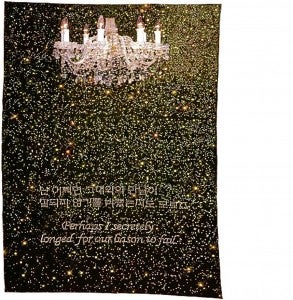 A line from a popular Korean song, “Perhaps I secretly longed for our liaison to fail,” is misspelled, the mistake itself embodying the fears of some Koreans that despite peace talks between the North and South, some shadowy forces want the negotiations to fail.

Another painting that marries traditional artistry with thoughtful immediacy is Pakistan artist Imran Qureshi’s “You Who Are My Love and My Life’s Enemy, Too.” A 216 x 365-cm gouache-on-wasli-paper work, it was inspired by a suicide bombing in the artist’s hometown.

From afar the work looks like an Abstract Expressionist work in bloody red. As one looks closer, however, the splotches of red have fine details of filigrees of flowers and fauna that somehow add a depth of beauty amid all the horrors of the incident.

Qureshi told the Inquirer that he’s a “miniature artist” and he draws from the tradition of Pakistani miniature painting to paint both a tribute to his hometown and an elegy to its lost innocence.

The nine photographs (90 x 105 cm each) are beautiful landscape photographs that, however, immediately belie their bucolic nature when one learns that the ponds are manmade: They’re the craters carved out of the earth when the Americans bombed neutral Cambodia near its border with Vietnam during the Indochinese war, thus sucking in the Cambodians into the maelstrom of hate and blood.

Rattana was born in 1980 and didn’t experience the bombing. He told the Inquirer he had attempted to pry out details about the war from his parents, who were so scarred by the experience that they wouldn’t talk about it. 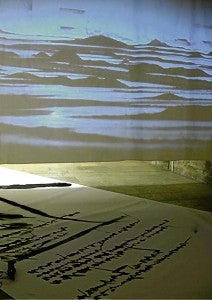 But interviews with the survivors along the Cambodian border revealed the horrors of the bombing, which both American policymakers and even Cambodian history textbooks do not mention. A 21-minute video documentary details the survivors and their ordeal during the war.

Emotionless and seemingly aping the bureaucratic coldness of consular officials, the women intone their complaints in a monotone, magnifying the cold-blooded ruthlessness of a superpower that employs border control to humiliate and subjugate citizens from small and weak countries.

In the exhibit at SAM, Tapaya’s huge work is faced on the other side of the hall by Malaysian Chang Yoong Chia’s “The World Is Flat,” a mixed-media work in which the artist uses postage stamps to constitute a collaged map of the world that charts a history of relationships between colonizers and the colonized.

Chang playfully but insightfully draws from the history of cartography as an imperialist practice. In one area, he shows Queen Elizabeth as she appears in various royal stamps having tea with herself, humorously portraying empire-building as a form of narcissism.

Oceanian Greg Semu, meanwhile, appropriates Christian imagery such as the Last Supper and the Pieta to depict cultural displacement as a result of political and religious colonization.

A native Samoan born in New Zealand to parents who had converted to Mormonism, Semu reconstitutes Da Vinci’s “Last Supper” in a suite of digital photographs in which he shows South Pacific islanders gathering around their last cannibal meal as the “savage” practice is now proscribed by Christian colonizers. The result is savage wit and humor.

But Christianity has its supreme moment of ecstasy and redemption as shown by Indonesian Ay Tjoe Christine (in collaboration with Deden Sambas) in her installation “Lama Sabakhtani.” As any Christian would immediately recognize, the title refers to one of the last words of Christ in Aramaic before He died on the Cross, “Father, why have you forsaken me?”

The work involves the guillotine falling down and, in the process, the tangle of wires with brass balls attached to the machine is pulled taut and the balls jingling and jangling and emitting a merry chime.

A devout Catholic living in the biggest Islamic country in the world, Ay Tjoe seems to portray the struggle between minority faith and majority religion, as well as how persecution and suffering are made bearable and even transcendental by Christianity, which ennobles pain and sacralizes struggle and humanity.

The old but still relevant theme of the clash of the old and new in very traditional Asian societies is poignantly rendered by Vietnamese Bui Cong Khanh’s “The Past Moved,” a series of photographs in which people from the artist’s old neighborhood in Saigon pose before a charcoal-on-paper backdrop of the village, set to be demolished to give way to urban development. The result is a moving elegy to one’s past as well as a defiant retrieval of memory banished by modernization.

Singaporean Michael Lee’s “Second-Hand City,” which won the People’s Choice prize, has none of the nostalgia of Cong Khanh’s work; his series of digital prints on archival paper is really less of a homage to lost buildings (which he anthromorphizes by giving them names such as “Primo Levi” and “Gaston Bachelard”), but more of a record of the debate between conservation and progress.

Conceptualism had its share of triumph, especially in Australian Daniel Crooks’ brilliant video work, “Static No. 12 (Seek Stillness in Movement),” in which the artist seeks to capture time through spatial time by charting like kneaded, elongated flour the very graceful movements of an old man doing tai-chi. But the work again appears to contrast old and new in Asian societies.

The work was originally installed at the underground swimming pool of the New Delhi public library, which the artist had discovered as nothing but a repository of morgued books and rubbish. After getting the approval of local authorities, she transformed the area into a “sub-aquatic environment” where library visitors could gather, rest or reflect on the installation, in which she makes references to India’s civilization and its origins from great rivers (the library is near the Yamuna river, considered by the Hindus as sacred like the Ganges) through the single-channel video of moving stills of an elephant, again considered sacred by the Hindus, swimming underwater.

Around are strewn bundles and bundles of books from the library and light boxes showing images from episodes from Indian myths and sacred books juxtaposed with contemporary images of rivers and bodies of water despoiled by greed and industrialization.

Tapaya’s work is now on exhibit along with those of the 14 other finalists until March 4, 2012, at the Singapore Art Museum (www.singaporeartmuseum.sg/signatureartprize).