‘Soul of Korea’: The way of the fist and the foot | Inquirer Lifestyle ❮ ❯ 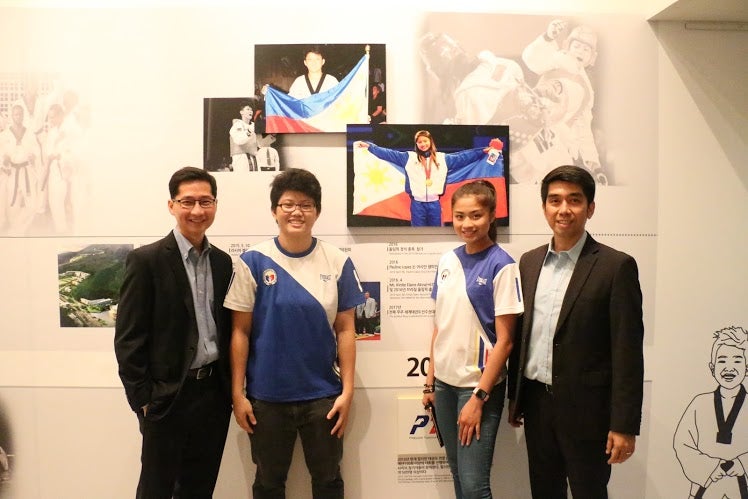 ‘Soul of Korea’: The way of the fist and the foot

SMASHING boards and spinning kicks? There is a lot more to taekwondo than you think.

A training not just for the “body,” but also for the “mind.” This is how Chris Choi, junior manager of the Korean Cultural Center in the Philippines (KCC) and curator of the very first taekwondo exhibition “Soul of Korea” described his country’s national sport.

Taekwondo is a combination of the Korean words which literally means to kick or smash with the foot (tae), to destroy with the fist (kwon) and the art or way of (do). Simply put, it is the way of the fist and the foot.

Recently KCC, with the Philippine Taekwondo Association (PTA) and Taekwondowon Park in Korea, launched the very first taekwondo exhibit in the Philippines, with the aim of promoting the practice of the sport in the country.

“I hope that through this exhibit more Filipinos will express their interest in learning Taekwondo,” KCC director Oh Choong Suk said in a press statement during the exhibit opening.

Like time traveling through Taekwondo’s history, the exhibit presents the development of the sport, from the Joseon era to the modern, its different principles and techniques—basically everything there is to know about the sport.

There is also a display of taekwondo paraphernalia, such as uniforms and sandbag kicks, as well as advancements in technology as shown in the electronic protectors, which records the impact of hits to each player making it easier to judge points objectively in competitions.

The earliest records of the said martial art dates back from the 4th century AD. Historians discovered murals on royal tombs from the Koguryo Era which depict two men engaged in unarmed sparring.

Choi explained taekwondo was a combination of Japanese, Chinese and Korean historical martial arts, which was developed to be used by the Joseon national army to kill invaders.

It has since developed into a form of “self- defense” martial arts that uses kicks to push enemies away, he added.

The modern taekwondo is the product of martial arts developed over many centuries in Korea.

“At that time (Joseon Era) it was for killing people… that’s why it’s more focused on hand [techniques] and how to kill,” explained the curator. “Nowadays taekwondo has lots of kicks to hit the enemy, but at the same time the enemy will be away from me.”

Choi also emphasized the importance of mind control and discipline to the sport.

In Korea, he said, taekwondo is very much associated with spiritual discipline and tenacity. Mind control is among the first lessons a beginner must learn he said.

The sport was introduced in the Philippines in 1972 by Master Yong Man Park, who was dispatched from Korea to the country with the goal of globalizing the sport.

At present, there are at least 500,000 taekwondo practitioners in the Philippines, said Choi. One of them, Kirstie Elaine Alora, is the sole taekwondo jin to qualify for the 2016 Rio Olympics, the first Filipino qualifier since the 2008 Beijing Olympics.

“I hope that we will continue doing this (exhibit) to promote taekwondo and the friendship of Korea and the Philippines,” said PTA secretary general Monsour del Rosario, who competed in the 1986 Seoul Asian Games and 1988 Seoul Olympics.