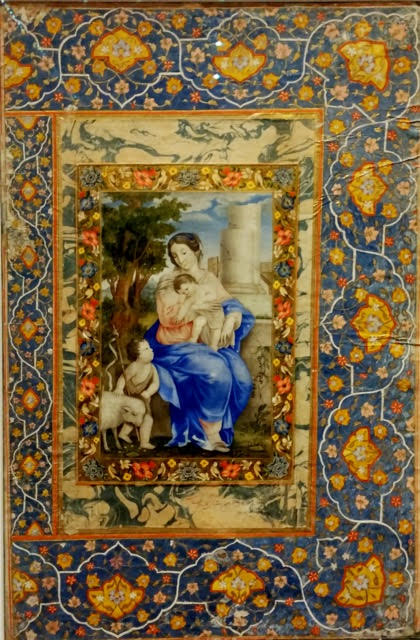 “VIRGIN and Child with John the Baptist,” by Muhammad Zaman; 17th-century, color and gold on paper PHOTOS BY DEXTER R. MATILLA

SINGAPORE—When discussing Christianity as a movement, the role played by art in in its spread is often neglected.

How a relatively young religion that has 33 percent of the world population today as followers came to be is the focus of the exhibit “Christianity in Asia: Sacred Art and Visual Splendor” at the Asian Civilisations Museum in Singapore.

With over 150 masterpieces collected from Italy, France, Portugal, Hong Kong, Singapore and the Philippines, the exhibit gives both lay museumgoers and experts a wide assortment of Christian images and iconic art that have distinguished the religion.

Among the earlier Christian art would be the iconography of Jesus Christ as the “Good Shepherd” found in the Roman catacombs. Despite its pagan influence, the image risked persecution of Christianity that was largely seen as illegal and a religion of the lower class.

It was only until 313 AD when Constantine I (West) and Licinius I (East) granted tolerance to Christianity—in what is now known as the misnomered “Edict of Milan.” Followers became free to establish churches; their properties, erstwhile appropriated from them, were restored.

As such, a number of Christian objects were commissioned by the Islamic courts of Syria, Iran, and Mughal India; the Chinese imperial court; and warlords of Japan. Local artists, some of whom were not Christian converts, made use of what they knew using materials unique to their places of origin whether mother-of-pearl, tortoise shell and precious stones and thus giving birth to the fusion of European ideas and Asian techniques in creating art.

Artists in Goa, Sri Lanka and China, known for their ivory carving skills, shifted from Hindu and Buddhist subjects, to Christian themes. Meanwhile Chinese potters added images of Madonna and the Child into their porcelain pieces.

One fine example of the fusion of Asian and Western techniques in the exhibit is 17th century Safavid painter Muhammad Zaman’s “Virgin and Child with John the Baptist.” The three characters are respected figures in Islam. Iran’s (formerly Persia) openness to the outside world, especially during the reign of Shah Abbas II (1642-1666), paved the way for European works of art to influence artists such as Zaman in the way they used perspective and blended shading and overall interest in Western themes.

In India, Christianity was established as early as the 7th century through traders from the Persian Gulf and the converts in Southern India were called Saint Thomas Christians.

When Portuguese came to rule Goa in 1510, Christianity spread quickly, churches were built, and artists produced works of high quality that the city became known as the “Rome of the East.”

The Portuguese were at the center of Christianization in the East. In the 16th- century navigator and colonial administrator Pedro Mascarenhas divided Goa’s districts between the Franciscans, Dominicans, and Jesuits.

An early 17th-century cabinet borrowed from Museu Nacional de Arte Antiga in Lisbon that’s on display features a Jesuit emblem on the top while the familiar Dominican cross terminating with lilies as well as dogs holding torches in their mouths can easily be seen in the lower portion. This is one of a few Christian objects made in India that combine symbols from more than one religious order.

China meanwhile officially recognized the “Church of the East” as early as the Tang dynasty. When Italian Jesuit missionary Matteo Ricci came in the late 16th century, he dressed as a Confucian scholar and impressed officials with his scientific knowledge. He tried to find connections between Confucian teachings and Christianity. The Jesuits of course were criticized by the formidable Spanish Dominican missionary and theologian Domingo Navarrete.

Chinese embroidered silks were quite popular and a bedcover in the exhibit featuring a double-headed eagle is proof of that. Though the central motif can be asso- ciated with the Habsburg dynasty, it was also used by the Augustinians in association with the heart pierced by an arrow.

A painting by an unknown Japanese artist shows Jesuits who were executed in Japan in 1622, 1623, and 1633. Though Christianity in Japan enjoyed success thanks to trade and evangelism with the arrival of Portuguese traders who brought Jesuit missionaries with them in 1549, disputes and political developments led to the persecution of Catholics in 1597.

In the next century, Lorenzo Ruiz from the Philippines would be martyred along with several Dominicans in Japan. Canonized in 1987, they are now known in the Catholic marytrology as San Lorenzo Ruiz de Manila and Companion Martyrs.

“Christianity in Asia: Sacred Art and Visual Splendor” runs until Sept 11. Free-admission days are Aug. 6-10, Sept. 3-4. Upcoming lectures include “Catholic Missions in South- east Asia” by Bruce Lockheart, assistant dean of Graduate Studies, Faculty of Arts and Social Sciences at the National University of Singapore, Aug. 19; “The Sacred and the Commercial: Christian Arts from Asia to Europe and the Americas” by William Sargent, independent scholar and curator, Sept. 1.