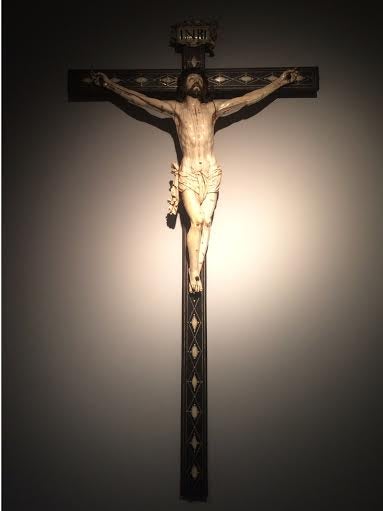 SINGAPORE—An image of the Crucified Christ, which figures as among the finest and largest ivory carvings in the world, fittingly opens the section for Southeast Asia in the exhibit “Christianity in Asia: Sacred Art and Visual Splendour” at the Asian Civilisations Museum (ACM) in Singapore.

The ivory crucifix is considered the single longest ivory corpus in Christian art in Asia and is on loan to the ACM exhibit by the University of Santo Tomas (UST) Museum of Arts and Sciences.

The exhibit, ACM director Alan Chong said, is “not intended to be a survey of the history of Christianity on the continent, covering the various missionary efforts, theological disputes, successes and setbacks.”

“Our subject is the art inspired by Christianity,” Chong declared.

However, UST’s image of the crucifixion is more than a work of art. Historically, it was crafted in the 17th century purportedly by a Chinese artisan from Fujian, the southern province of China known for figural ivory carving. It established links with Manila in 1567.

Culturally, the icon comes close to being as old as Christianity in the Philippines, dubbed as the “bastion of the faith” in Asia.

In terms of aesthetics, the peculiar rendition of the image manifests the masterful artistry of its creator from centuries ago.

At 58 x 53 cm, it the largest ivory image of the Crucified Christ, second only to the one at the Cathedral of Notre Dame in Paris.

The icon portrays the dying Christ with his eyes nearly shut. Paint is used to color the crown of thorns, the hair and beard, and the blood and wounds. The distinct posture from the head to the feet, ostensibly adapted by the artist from the original shape and size of the ivory tusk, captures the seeming struggle of a weakened man hanging on the wooden cross.

Only the plaque with the Latin monogram “INRI” (Jesus of Nazareth, King of the Jews), the arms, and the folds of cloth at the side are the separate ivory carvings, attached to the image. Meanwhile, on the cross are numbered holes. Relics of saints are said to have occupied these spaces in the past. The centuries-old ivory image is part of the vast Philippine Religious Images collection of UST. It has been loaned for the ACM’s first major exhibition to signal its reopening after a long hiatus due to renovations.

“Ivory sculptures are perhaps the most significant contribution Asia made to Christian art,”saidChong.

As early as 1590, the Dominican friar Domingo de Salazar, the first bishop of Manila, had already noted the works of artists in this part of the world. “It seems to me that no one could make anything more perfect, as everyone has seen them can attest,” he wrote. Two other Philippine institutions also loaned to ACM their 18th-century collections. The Intramuros Administration has loaned its ivory carvings of St. Jerome and the Holy Family, and the Bangko Sentral ng Pilipinas, its wood carving, titled “The Crucifixion,” and sculpture, “Bed of the Infant Jesus,” which is ornamented with gold, gemstones, textiles and ivory. Other interesting items, originating from the Philippines, are the 19th-century pendant “The Divine Shepherdess,” a carved mother-of- pearl seashell, and Talismanic (“anting-anting”) shirt, which is documented to have been worn by some revolutionaries during the Philippine Revolution.

Other ivories on exhibit believed crafted in the Philippines are the 17th-century plaques, which individually depict the infant Jesus as seafarer, the Immaculate Conception, St. Jerome making his penitence at the foot of the cross, and a triptych of the crucifixion flanked by images of saints inside frames.

A smaller 17th-century cross, also from the Philippines, is on display. Other ivory figures from the same era are of the Blessed Virgin with her robe tucked in at the back, a distinctive feature of carving from the Philippines; St. Francis of Assisi; and the Christ Child, called as Salvator Mundi.

There are also the 19th-century images of St. Joseph and the infant Jesus, and the Virgin of Mt. Carmel. All these, save for the Immaculate Conception, are owned by ACM.

According to Rosa Daniel, chief executive officer of Singapore’s National Heritage Board, the exhibit comes after the realignment of ACM’s mission “to embrace the connections between Asian cultures, and between East and West.”

The exhibit, indeed, lives up to this goal. While it is nearly impossible to chart the influence of Christianity in Asia, even in the singular field of art for over one and a half millennia (since 700 AD according to the exhibit), ACM succeeds in presenting how cultures inter- sect in art, such as how Christian images and symbols blend with Islamic, Hindi, Buddhist, and Confucian themes.

Notably, the wide range of Catholic artifacts, mostly associated with the Society of Jesus (such as relics of St. Francis Xavier) from the Jesuit missions in China, India, Japan, etc., indicates the impact Christianity has had in Asia.

One however wishes that ACM had included more items from the early missionaries, such as the Augustinians, the earliest builders of communi- ties and churches in the Philip- pines (some of these baroque churches still stand today).

They are also the custodian of the oldest Catholic icon in the Philippines, the Santo Niño de Cebu. The Dominicans also have a wide array of ancient art-works, even publications, considered to be Asian incunabulae, with printed images of Christian themes. The Franciscan achievements could have been better represented too.

And, these are only from the Catholic group. There are still other Christian denominations.

But by and large, this exhibit proves important. It is one that has to be mounted, especially in these times when cultural differences are amplified. As Daniel said, exhibitions of this kind are “means for visitors to understand their neighbors,” may they have similar or different faiths.