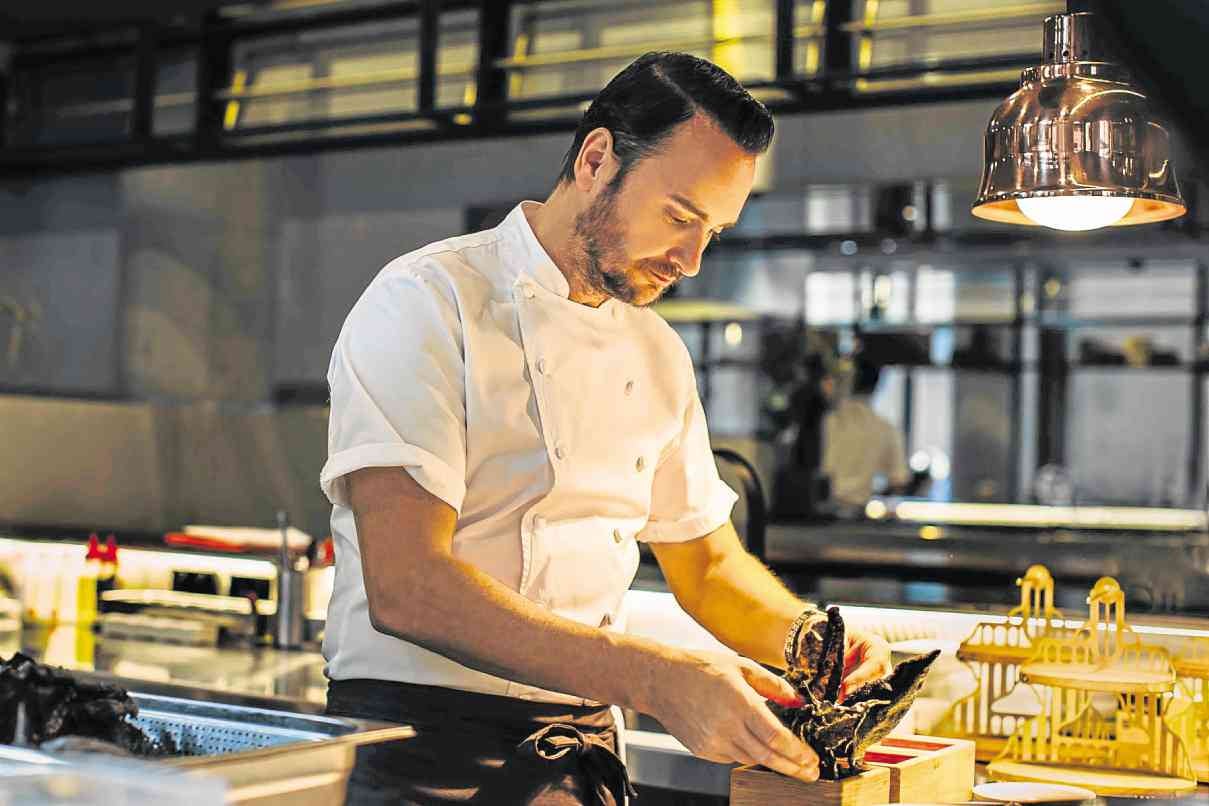 JASON Atherton: “For now I need to concentrate here, to get this right.”

The casual-chic modern tapas bar is the critically acclaimed British chef’s debut in his wife Irha’s birthplace, Cebu—his “love letter” to her, he said—and joins his 15 other restaurants in the world, three of which have a Michelin star. It’s the latest addition to Cebu’s burgeoning food scene.

But even as his global renown is closely tied to those stars from the venerable restaurant guidebook, Atherton, 44, was quick to downplay them as his motivation for opening restaurants—at least four outlets in 2016 alone, two in London right amid the Brexit, under his dining empire called The Social Company.

“I always tell my chefs, we aim for Michelin-quality, but that’s not our [sole] aim,” he said. “If you aim for Michelin quality, it means you’re really focusing on the food, that every detail is correct. But it doesn’t matter if my restaurant doesn’t get a Michelin star, because I don’t open restaurants to win a Michelin star. I open for my customers. I want them to enjoy themselves, that they have drinks and coffee that are great, where food and service are great. If we get a star, fantastic; if we don’t, it is what it is.”

Unlike many famous chefs, Atherton continues to work, and relishes his time, in the kitchen.

At the media lunch before the first dinner service on opening day, he was in his chef whites running the pass, expediting, stepping out to explain each dish that came out of the kitchen, which is headed by Manila-born Tim de la Cruz, who worked in Atherton’s London kitchens before moving back home to lead the Cebu restaurant.

The Pig & Palm’s menu is a mix of entirely new dishes and some signatures from Atherton’s other tapas restaurants—22 Ships in Hong Kong and Social Wine & Tapas in London—but using local ingredients such as tuna or Cebu jicama instead of daikon.

The restaurant’s name is a paean to the resort town’s beloved pork lechon, of which the chef naturally created his own version, served with an onion gravy and apple puree.

The menu is a lot leaner than most Filipinos are probably accustomed to, which is always a good sign. The dishes are surprisingly quite affordable, with small plates starting at P125. The priciest is a steak platter, at P1,900, and the only item that tops P1,000.

“My goal is to make it affordable since it’s a social restaurant,” Atherton said. “If it’s too expensive, no one’s gonna come, or only on their birthday. That’s no good.”

It’s mostly small plates because “tasting menu is finished,” he said. “Degustation is finished. Tasting menu was very famous in the last 15 years. In all of my London restaurants, they’re bored with it. When you have 15 courses, it’s unhealthy to eat that much food.”

Instant standouts were the spicy and succulent chicken karaage served with sriracha mayonnaise; the clean flavors of the kinilaw of plump shrimps, with a dressing of calamansi, chili, coconut and pickled papaya, par-cooked instead of being served raw; the delicate sashimi of tuna served with ponzu, Cebu turnip and jalapeño ice; the local red mullet and clams wading in a hearty broth of bacon and beer.

For nonmeat eaters, there were the char-grilled sweet young carrots marinated in miso and served with baba ghanoush and walnut pesto; and a verdant bowl of English peas and broad beans dappled with nuggets of smoked curd.

With holidaymakers in mind, The Pig & Palm also opens for breakfast.

‘Lechon kawali’ for his daughters

Atherton, who likes to cook lechon kawali for his two young daughters on weekends, thinks Filipino food is quite interesting and “is waiting to be discovered.” He and wife Irha had been mulling “a different way of cooking Filipino food,” in London. (On his second attempt, however, he sheepishly admitted to still gagging at the sight of the chick in balut.)

Atherton describes his cuisine as “simple but complicated.”

“I know, they contradict. The food you had was very simple, but a lot of preparation went into that,” he said. We use high-quality ingredients, all the techniques. There are only 3 to 4 ingredients on a plate, but we make sure it’s balanced.”

He added: “Food is a social thing… The drinks, music, atmosphere, they’re all part of it. When food becomes too serious, it loses its value as a social tool to enjoy your time together… When my chefs don’t take the food seriously, it makes me upset. They have to take food seriously so you don’t have to.”

Atherton trained under Gordon Ramsay and Ferran Adrià, but his cuisine is all his own. His kitchen is a lot calmer than what people have seen in the volatile Ramsay’s TV kitchen, and he doesn’t do molecular gastronomy in the style of his Spanish mentor.

“I get that a lot, but I don’t cook that food,” Atherton said. “When I won my first Michelin star, the Michelin people said to me, ‘the reason you got it so quick is that the food you cook is very unique to you.’ What Ferran Adrià did was very unique to him. There are people who lead and there are people who follow. I don’t wanna follow, I cook my own food… I worked for Ferran Adrià for two years. I learned his food, I took the things that were interesting for me, changed them a bit and that’s it.”

As in his other restaurants outside of London—in New York, Sydney, Dubai, Hong Kong, Shanghai—Atherton has a local partner in Cebu, property developers Carla Yeung and her British husband Chris McKowen, to keep an eye on the ground. The Pig & Palm is at the Yeungs’ MSY Tower at Cebu Business Park.

They used to come only at Christmastime, but the chef foresees their visits to be more often, with an eye on opening a restaurant in Manila “if this one goes well.” He said chef Todd English, who has two franchised outlets in Manila, was very encouraging.

The convent-inspired Cebu restaurant was designed by architect Lyndon Neri of the Shanghai-based Neri & Hu. Neri, who’s half Cebuano, also worked on other outlets of The Social Company, including the flagship Pollen Street Social in London, which earned Atherton his first Michelin star only six months after opening in 2011.

After the Michelin guide’s recent launch in Singapore, and later this year in Shanghai, Atherton foresees the guidebook to soon debut in Asia’s main cities to include Manila and Cebu.

“Chefs think the star is for them, but it’s for the customer. It’s a guidebook,” he said. “Will I kill myself if my star is taken away? Really? It’s ridiculous!”

Atherton has done his share of TV shows, and believes food shows are important in promoting gastronomy, but he hasn’t really taken to TV. “I hated it!” he said of one particular series where he did 16 episodes.

He appears on “Masterchef UK” a few times a year because “it’s good for the profile. It’s good for bringing in people to the restaurant, for selling cookbooks. And it pays for my wife’s handbags.”

But he thinks it sends the wrong message to kids: “Don’t become a chef to become a TV star. Be an actor or singer if that’s what you want.”

As chef-restaurateur, Atherton’s goals are quite simple: “I want diners to leave and say,  ‘That was a really great time. Not just great food, but great time. I loved the food, I enjoyed the service, I loved the ambience, I wanna come back.’ If they say that, it means we’ve done our job properly.”