How the famed Spanish ‘jamon’ is made | Lifestyle.INQ ❮ ❯ 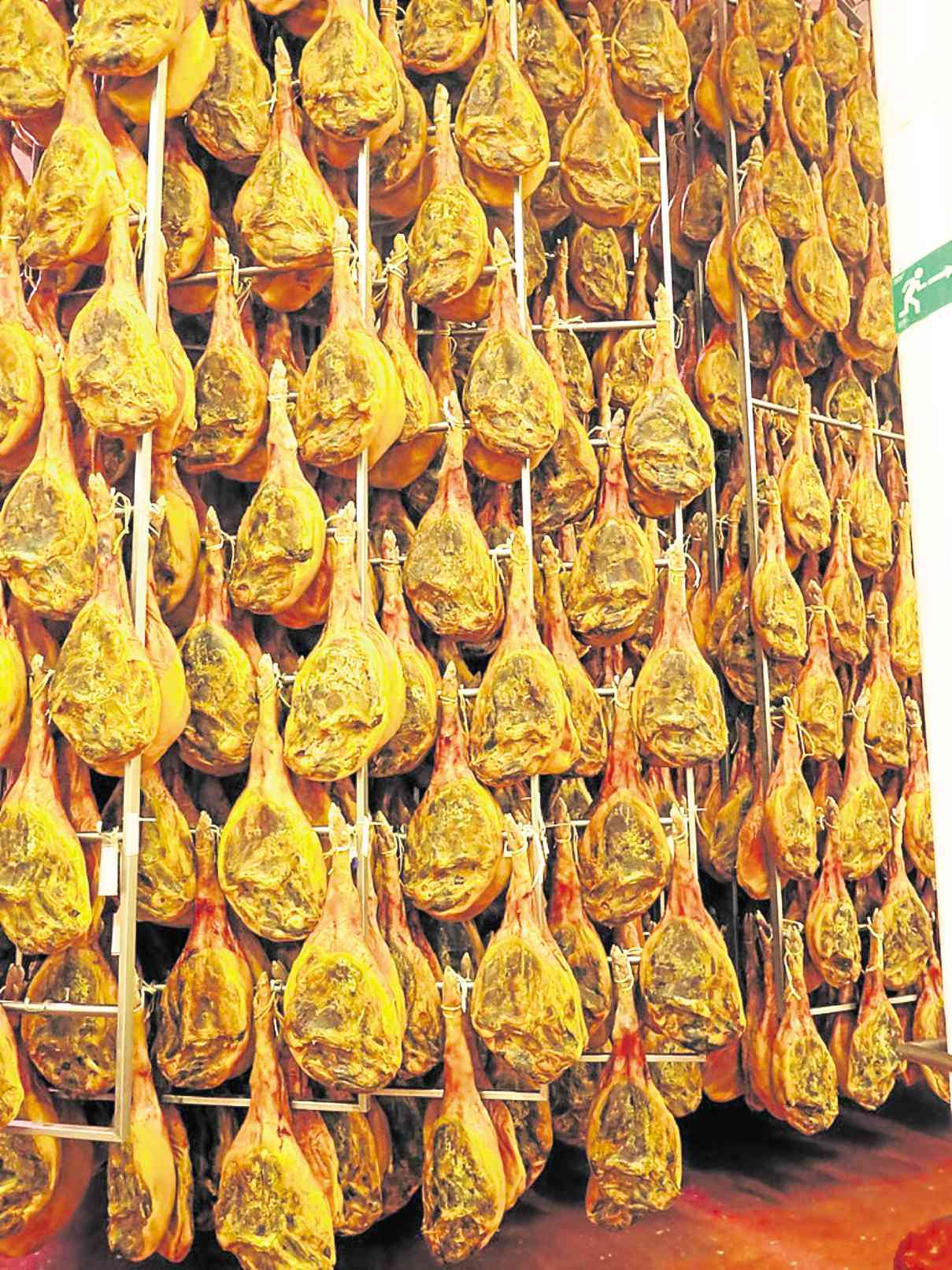 How the famed Spanish ‘jamon’ is made

The romance of a Spanish jamon seems to start with the cortador (professional ham slicer), who works with a knife that looks like a shortened samurai sword.

Thin slices are cut, the long strips then cut into squares and placed artfully onto a plate. How the jamon is made, however, takes the bigger part of the story.

We were fortunate to take a look at the process while visiting four plants in Toledo, Malaga and Girona, all in Spain.

We were to learn about jamon Serrano, specifically hams made from white pigs of the Duroc variety.

Taking us around was Interporc, the organization that represents Spain’s white pork industry, said to be the biggest hog producer in the European Union and the third largest in the world.

At every facility, a whole pig is slaughtered, then cut into its viable parts. The pata (hind leg) and the shoulders are what end up mostly as the ham cuts. Each cut goes through the processing steps—washed, then dried, salted and hang-dried for 16 months.

The most important lesson here is how tradition and modern methods are melded to let the ham go through the seasons of the year.

Apparently, ham-making starts in winter in Spain. In the huge drying plants, there are refrigerated sections where the hanging ham goes through winter weather, then spring, summer and autumn—each room designed to simulate the temperature and humidity of the seasons.

At Incarlopsa in Toledo—with its beautiful architecture made from Toledo clay—was a long row of refrigerated rooms on both sides that must have stretched for several kilometers.

At the time of our visit, some of the summer hams were going into the autumn rooms, hanging from steel rods (and here I am guessing) about 40 feet high and 15 feet wide.

Before then, we were shown how ham was salted in huge steel cases. The salt comes from a salt mine, but we we were told the manufacturers also had to scout for new sources, given the amount of salt required. The length of the salting process is approximately one hour per kilo of ham.

Carneques Celra in Girona has a different style, with each leg individually salted. While hygiene and other standards are similar for each facility, there is room for individual recipes and styles.

Back at Incarlopsa, the legs are washed next, then pork lard is painted on each leg to seal the leg so that microbes will not settle in between the muscles, before the entire leg is hung to dry for that inevitable trip to the seasonal chambers.

When the ham gets done at the autumn chambers, the good mold that helps in the ripening is scraped away. The ham is washed, then dried, and goes to a facility that torches the fat.

At the Faccsa Prolongo plant, a family-run facility in Malaga, the mold on the ham is more apparent than at Incarlopsa. That gives the meat a different character and taste. All mold, of course, is scraped off.

The ham goes through an assembly-line process, but the tying of the legs, the hanging and moving through the seasons are done by hand.

At every facility, there is a deboning section that takes out the main leg bone, as the customer wishes. There are robot machines that do that now, but Carneques Celra in Girona prefers hand extraction, because robots are not that efficient.

Deboning enables the slicing of ham using machines. These are packed, sealed and branded and sold at retail outlets like groceries, where buying a mere 100 grams of jamon curado (cured ham) is possible. These are in strips or bigger slices, all paper-thin.

But a whole leg of ham makes possible the sight of the cortador slicing through the leg. We were told that there are different names for certain parts of the leg. The best part is called masa; the shank, harrete; the opposite side of the masa is the babilla; and near the hoof is the punta. To know if the best part is being cut, you should ask the curtador if he is slicing the masa.

We went around Spain eating jamon and never tiring of it. We had it in tapas bars, restaurants and even on the bus where we had sandwiches to go—crisp, long breads painted with chopped tomatoes the Spanish way, and where layers of jamon Serrano made our life on the run filling, delicious and such an adventure.