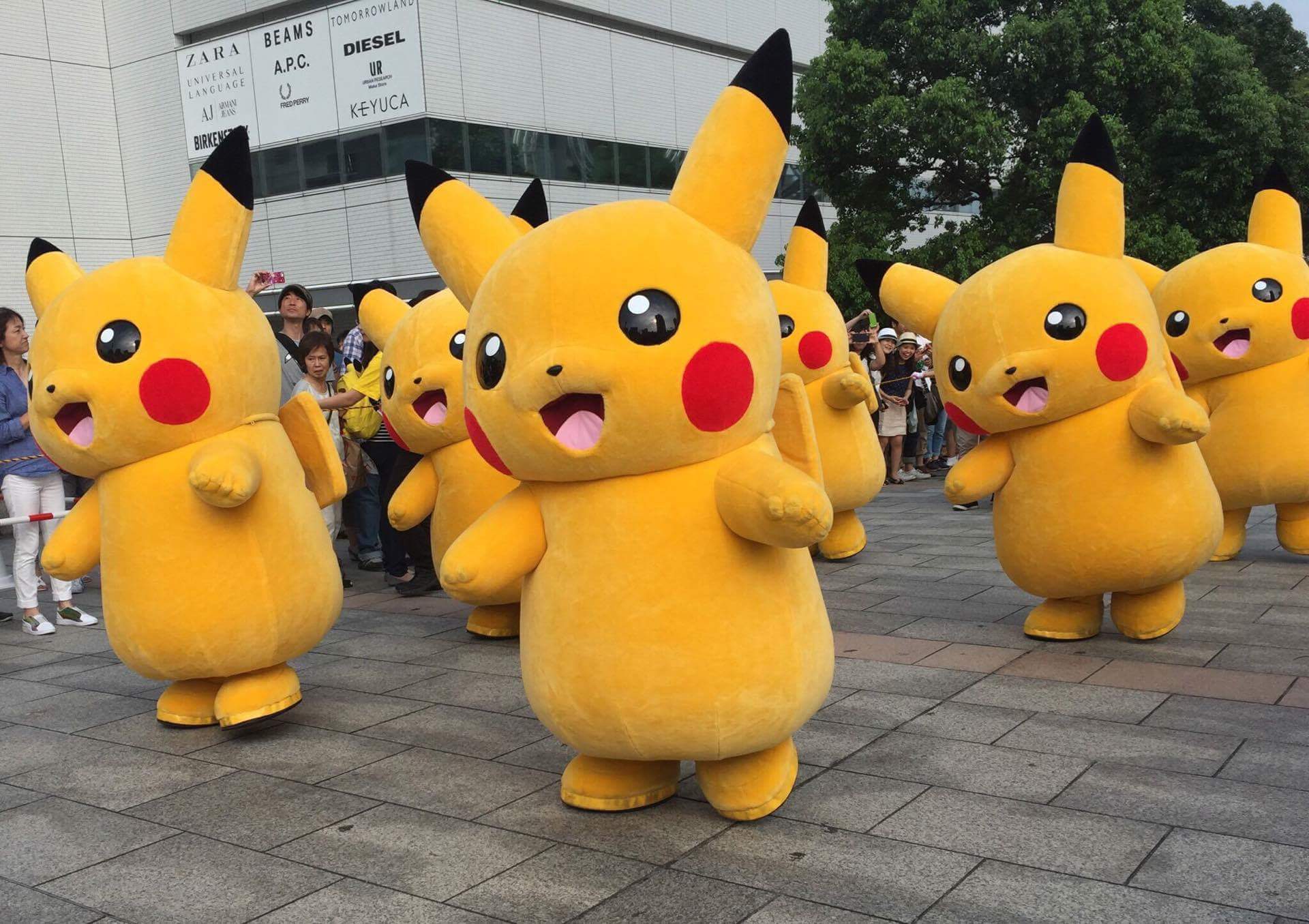 The theme of this year's Pikachu Outbreak is Splash. PHOTOS BY DIN VILLAFUERTE

Getting into Yokohama’s Pikachu madness

YOKOHAMA—Tokyo is a quiet city.

Besides the sounds of trains on railway tracks, the pedestrians stomping on street crossings, employees shouting their oishi menu promos, and even the noise of crickets at night, the city of 13 million people generally lives in serene silence.

But that silence can easily be broken by seven syllables, said by a familiar voice that goes: “Pika-Pika-Pikachuuu!”

You’ve probably seen viral Facebook videos of Pikachu mascots in droves dressed in different costumes. In their yellow tubby form, with an ever-smiling face and thunder-shaped tail, we see them walking in sync, waving hello and dancing—making them cuter than they already are.

Outside of your screens, these Pikachus can be seen in the city of Yokohama every weekend starting in the month of July. The Pikachu shows run until Aug. 12, just in time for the start of Japan’s four-day holiday.

Officially called the Pikachu Outbreak, The Pokemon Company-created event was first launched in 2014 and easily became a much-awaited festival annually, with already two generations growing up with Pokemon.

While Pikachu is undoubtedly the world’s favorite Pokemon, it has become more than just a character. It now takes on a huge part in Japanese pop culture and an even bigger role as an international icon.

In the Outbreak, you don’t need to use a lure or incense to catch that excitable feeling of spotting the elusive “Pokemon Go” Pikachu.

Pikachus are everywhere you look. They can easily be seen in various places in the city that will get you thinking that there must be a Pikachu breeding nest in Yokohama, probably hidden inside the city’s Pokemon Center.

“The event was created with the idea that everyone can just enjoy Pokemon outside, just like in Pokemon Go,” The Pokemon Company corporate officer Susumu Fukunaga said.

Watching the different shows makes the crowd rekindle the reason why the electric mouse is a favorite as the Pokemon shows off its ever kawaii attitude, some moments of mischievousness and a bunch of bouncy, power dance moves.

With those happy round eyes and full cheeks, it’s hard not to get into the Pikachu madness.

Inquirer Super witnessed three kinds of Pikachu Outbreak shows. The first was heavily inspired by the musical “Stomp,” with the music beats created from tap dancing, metal sheets, metal cups and water splashes—there was even some beat boxing for the Pikachus to bob along to!

The next show, the Super Soaking Splashing Show located at Yokohama Red Brick Warehouse, was a real treat in the 40 degrees C weather. It had water shoot up like in a fireworks show, soaking the crowd as they watched Pikachus in varsity shirts and hoodies dance.

The Skating Show in Queen’s Square had a narrative about a Pikachu turning evil after being part of Team Rocket. It was up to the audience, composed of young aspiring Pokemon masters, to bring out its good nature once again by doing their version of a Pikachu electric beam.

The Pikachu Parade is always the most anticipated part of days spent in Yokohama. The yellow icon is seen in a single file, moving to the cue of a whistle and mimicking the pace of an Army march—a battalion of Pikachus in its golden glory.

Grab a copy of Inquirer Super for more Pikachu Outbreak and Pokemon Go stories on our Super Fieldtrip to Tokyo!