Top cosplayers from Asia at The Best of Anime 2016 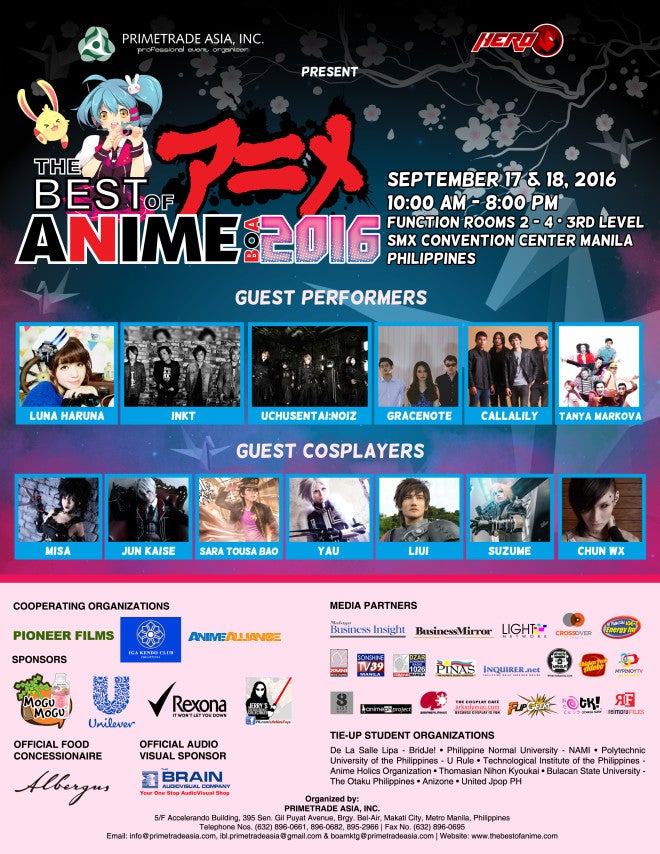 The best place to be for anime lovers, fans of Japanese culture, and cosplayers will be at the SMX Convention Center in Pasay City as the country’s biggest event for Japanese pop and Asian culture is back. The Best of Anime(BoA) 2016 is set on Sept. 17 and 18 for two days of fun for otakus.

A co-located event of the Manila International Book Fair (MIBF), BoA 2016 promotes Japanese culture and music through exciting activities, exhibits, and performances by the hottest acts from Japan. Top cosplayers all over the world will highlight anime competitions and meet with fellow lovers of anything Japanese.

BOA2016 will feature the Ongaku Fest which brings together on Sept. 18 two of the biggest acts in Japan – INKT and Haruna Luna. Headlined by former KAT-TUN member Koki Tanaka, INKT is known in Japan for their indie vibe, while Haruna Luna’s sweet vibe is set to dazzle the audience with her repertoire including “Overfly” and “Kimi Iro Signal.

Returning due to popular demand is visual kei band Uchusentai:Noiz, to rock the house with their blend of energetic music and wild costumes onSept 17, 6:30 pm. Pinoy indie music band Tanya Markova is also set to take the stage for their fresh take on OPM. Best known for their song “Picture Picture”, the band is ready to entertain everyone at BoA with their “goth meets pop” take on music.

Other exciting events on Sept 17 at the Function Room 4 include the film showing of “Naruto the Last: Part 1” at 10 am, Anime Guild Presentations by Haikyuu PH and Grandline PH at 11 am, and the Mogu-Mogu Challenge at 11:30 am. For INKT fans, there’s “Kore Nani?” organized by INKT Philippines as part of the Nihongaku Fan Fest at 11:45. The competition also heats up with three exciting competitions lined up: aspiring singers will shine at the BoA Superstar Karaoke Competition at 12 noon while groups are ready to rock the stage at the Battle of the Bands at 2 pm. Aspiring cosplayers will also enjoy the BoA All-Star Cosplay Competition at 3 pm. IGA Kendo Club will also hold a Kendo Demo and Workshop at 1:15 pm while Amuse Philippines will hold Name It and Babymetal Philippines will hold Name That Tune at 5 pm as part of the Nihongoku Fan Fest.

On Sept. 18, performing are Grace Note, which will do takes from their highly popular album “Transparent”; OPM veterans Callalily, Chun WX, Sara-Tousa Bao, and Suzume.

Also to watch out for are exciting events at the Function Room 4 on the same date. At 10 am, “Naruto the Last’s” Part 2 will be screened followed by “Draw Down the Lane” by Yamapi No Waratte Philippines and #JustJin by Jin Akanishi Philippines as part of the Nihongaku Fest at 11 am. Meanwhile, cosplayers from different schools will coverge at the BoA Interschool Cosplay Competition Finals at 11:30 am and Maximum Royal Sixth Guns Philippines will hold “Welcome to the Dark Age” at 1:15pm. There will also be a film viewing of “One Piece Film Z” at 5:30 pm.

The Manila International Book Fair (MIBF) is slated from September 14-18 at the SMX Convention Center. It is the country’s biggest and longest-running book fair and is considered a go-to event for the book-loving community. Yearly, the fair showcases the largest and most varied collection of literature for leisure and academic reading. Also running simultaneously with the MIBF is the Philippine International Conference on Teacher Education (PICTE) on September 13-15. For details, call 896-0661or 896-0682, e-mail [email protected], or follow @ManilaBookFair on Twitter. ADVT.