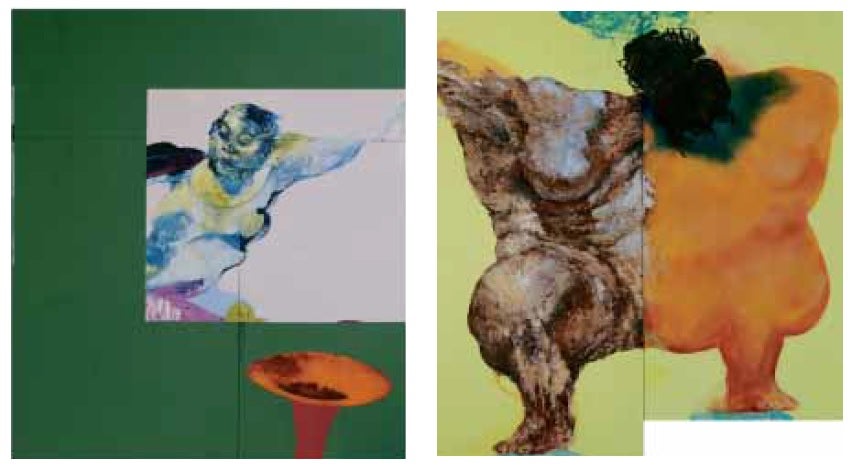 AS J Consunji nears the completion of his series of paintings, a unifying theme finally emerges from the volatile imagery: It has developed into a collection of raw thoughts and moments bound by a sense of place. The series has become a confession of the contemporary struggles of a hot and humid city, befitting its title “Tropica.”

One of the strengths of this exhibit (and a rare feat among Filipino artists today) is that Consunji is emancipated from the need to work inside a thesis. Seeming to be acting on instinct, Consunji shifts and flows to what the vision demands, surrendering rational control to stay loyal to the moment of inspiration.

Born in 1980, Consunji is part of the DMCI clan, a family who runs a major construction and utilities company in the Philippines. But ever since childhood, he has showed an undeniable eagerness for fine arts.

At 12, he was enrolled by his mother to the art classes of Rody Herrera, painter of historical themes and designer of the old Philippine bank notes. After his first term, he was given the subsequent lessons for free, as an incentive for doing well.

His initial plan was to become an automobile designer, so Consunji finished a course in Industrial Design at De La Salle-College of Saint Benilde, but he decided soon after that his medium was unquestionably in painting.

He then earned a Bachelor’s degree in Visual Arts at the Australian National University in 2009. He was awarded a Westende Traveling Scholarship that brought him to the prestigious École nationale supérieure Beaux-arts in Paris in the same year.

Despite moving into the arts, construction and urban development persist in the Consunji’s psyche. In “Tropica,” the artist makes clever use of multiple panels, which he treats as artificial elements similar to constructed environments.

In “Static River,” the artist recreates a moment of disconnection. He uses a panel of dark television static as a concrete obstruction between two indistinct figures, reaching out, but combative.

“Kilometer 0” is an image of blurred motion depicting physical and emotional displacement; a visual metaphor for the migration of refugees to urban cities in search of a better life.

“Tropica” was conceived out of an unapologetic abandon that bows to nothing except to its environment. In this instance, an intensely temperamental city whose emotions permeate even the deepest recesses of its residents’ minds. This is probably the reason why Consunji’s images, though significantly abstract and unreasoned, feels undeniably relevant to someone who has survived in the same place: the urban tropics.