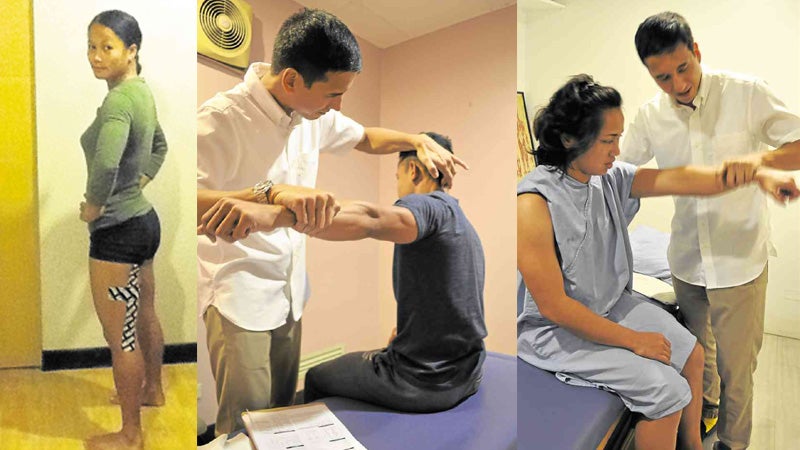 However, pain in the back and buttocks also hinders elite and weekend athletes from reaching their goals.

Veteran Olympian Marestella Torres, dubbed the “long jump queen,” was initially experiencing setbacks in qualifying for the Rio Olympics, mostly due to the pain in her lower back and hips.

Dr. Martin Camara, chiropractor and co-chair of the medical commission of the Philippine Olympic Committee, spotted muscular imbalance in the hip flexors or the muscles around the hip joint. These are the body’s most active muscles that initiate running, jumping and kicking.

“One side was pulling much stronger than the other. With every jump, squat and run, Marestella was pulling herself out of alignment,” said Camara.

He also detected a pinched nerve in the athlete’s pelvis.

“A motor nerve is responsible for supplying electrical impulses to a muscle. If the nerve is pressed, the muscle doesn’t fire as efficiently or as strongly,” he said.

Torres found relief in spinal manipulation, which releases the compressed spaces near the spinal disk, corrects the nerve supply in the hip, and enables the body to be more supple.

She was also given other therapies to ease her pain and release tense muscles.

Over time, Torres recovered and gained confidence to qualify for the Olympics after six attempts. With a record of 6.72 meters for the long jump, she not only surpassed the Olympic criteria of 6.7, but also broke her own record.

Getting back to her peak form began with correct body alignment and muscular balance.

Camara said whether you’re a triathlete who bikes to Batangas on weekends or an urban warrior whose exercise is climbing the MRT stairs or pushing grocery carts, a person can perform any task by following the “functional pyramid.”

These are building blocks that allow you to control movements in the widest range with ease and strength.

The foundation is body alignment, followed by other layers that affect movement patterns—mobility, stability, strength and consequently, endurance.

They can determine if your movements adequately meet the requisites of your activities and also prevent injuries.

“These will keep you functional as you get older,” said Camara.

He cited the importance of the core muscles, the vital connection in a chain linking the upper and lower body. The movements either start from or go through the core.

While a strengthened core has been glamorized as a chiseled or rock-hard abdomen, mobility, stability and body alignment are taken for granted.

The core extends to the ligaments on the sides of the thighs and the inner thigh muscles.

“The biggest mistake is that core strengthening is doing crunches and sit-ups. People disregard everything else, so they end up with muscle imbalance that leads to back problems,” he said.

The basis of the core is the pelvic girdle, the muscles around the hips, which Camara likened to a building foundation.

“If your foundation isn’t properly aligned, everything you build below it—the knees, the shins, the feet; and on top, the spine, the shoulders—is off,” he said.

If properly aligned, the body achieves full, pain-free, unrestricted movement. However, there is also the tendency to focus on mobility, or stretching without gaining strength. Mobility should be balanced with stability.

“Stability is about making the movement safe. The muscles are strong enough to hold you in place. Then you build on strength, followed by endurance. With stamina, you have optimal function,” said Camara.

He pointed out that breathing is important to keeping the core stable: “Your diaphragm connects to everything.”

Olympic silver medalist Hidilyn Diaz was an example of how her back and shoulder problems came from muscle strength imbalances between her hips and shoulders. This made her weightlifting uneven.

“A good sports chiropractor evaluates the nerve supply coming out of the spine to the hips and shoulders,” said Camara.

“In her case, specific chiropractic adjustments to her pelvis and mid-cervical spine were sufficient to ‘fire’ the muscles of her hip and shoulder better. This eases the discomfort and allows more efficient lifting. We combined this with stretching tight muscles to improve mobility, open up restrictions and special Rocktape (a branded athletic tape) applications to induce recovery and improve circulation.”

Camara has also been working with another Olympian, swimmer Jasmine Alkaldhi, who complained of chronic shoulder pain. One shoulder turned out to be weaker, and the pinching of a nerve came from the lower neck.

Spinal adjustment helped ease her neck pain and enabled the nerves to function properly. To deal with shoulder pain, she was given fascial manipulation, a manual therapy that treats the fascia, the band of tissues that cover the muscles along its network.

It addresses the source of pain coming from another part of the body, and not just releases tension in the aching site.

Managing pain is like physical training. “You don’t go to the gym once and then expect to be strong forever. You have to exercise regularly to get the base strength and maintain it,” said Camara. “Although individual treatments are good for you, a program is recommended to get the benefits.”

Still, prevention is the best medicine. “Health is your responsibility, not the doctor’s or the sports trainer’s. Pay attention to it and make time for it. Get qualified people to show you what to do—but then you actually have to do it,” said Camara.