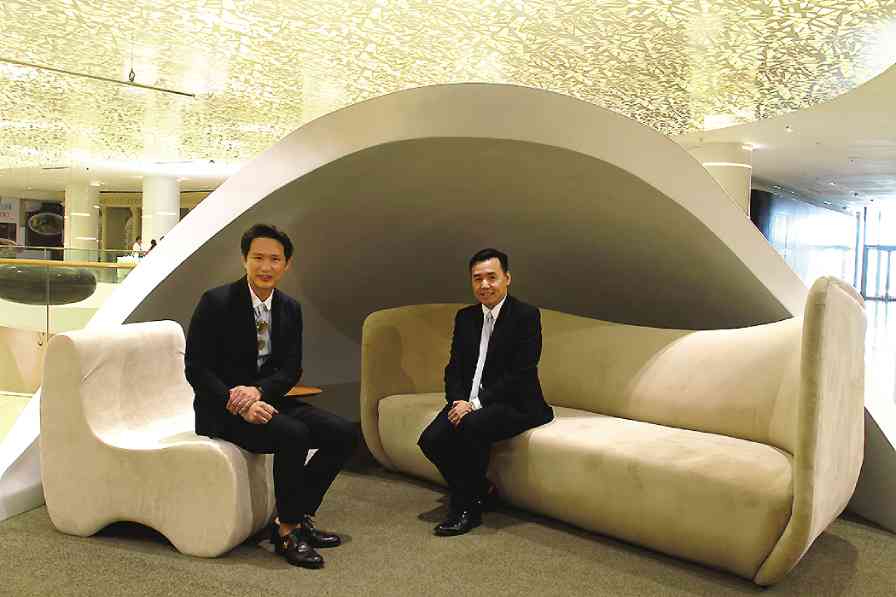 STEVEN Tan and Perkins So of SM Supermalls sit in one rest space that resembles a pod.

S MAISON, the high-end mall at the podium of Conrad Manila, isn’t just about shopping. It offers a whole experience with new food concepts, specialized services and entertainment.

“The name is a play on words,” explains Steven Tan, senior vice president for operations of SM Supermalls.

S Maison’s initials adhere to the SM branding— in French.

“The House of S could mean other things aside from the Sy family,” says Tan.

Given its exclusive market niche, Tan explains, S Maison doesn’t compete with Mall of Asia (MOA), which has become the central plaza or downtown venue of concerts, fitness clubs and the weekend food market or bazaars.

S Maison focuses on a curated mix of stores and restaurants that bring uniqueness to the mall’s repertoire. The voluminous space in the lobby accommodates the trend in popup stores, cute kiosks and showroom and exhibit spaces, all of which provide visitors something out of the ordinary.

“We wanted to offer the best,” Tan points out. “People can come here if they want to avoid the crowds. They can relax here.”

The developers visited malls abroad with a similar format to S Maison.

“We looked at Tokyo Midtown and Roppongi Hills in Japan where the hotel is above the retail podium. Somerset in Singapore is beside the giant malls such as Ion Orchard. We realized that these malls are lifestyle-driven,” Tan explains.

The design complements the water-theme architecture of Conrad Manila whose silhouette is like that of a luxury liner docked on the port.

The interiors were drawn from the traditional romantic idea of the Philippines as the “Pearl of the Orient.”

The lustrous surface treatments give one the feeling of being inside an iridescent shell.  Seating areas on pods resemble pearls out of a clam. Large, organic-shape black pearls hover over the lobby area.

Dappled light streams from cutwork patterns of abstract leaves and twigs on the ceiling.

“It’s called the god-like effect,” says Perkins So, AVP-Operations, on creating an ambience.

S Maison, at 25,000 square meters, has 74 stores on two levels. The mall has created zones to allow customers to find easily the stores geared for their needs.

Tan says S Maison’s strength is in the novel restaurants. New franchises are being launched at this podium.

Uma Uma Ramen is the franchise from Iki Concepts of Singapore of the Fukuoka Ramen Shop. Chibo Okonomiyaki takes pride in its meat- and vegetable-filled Japanese pancakes. The Starbucks Reserve is the first outlet that offers the Experience Bar. Customers are greeted with coffee that is brewed according to their specification.

Coming soon are Tsukada Nojo, known for its collagen-based ramen and organic chicken; the steakhouse, The English by Todd English; and the Jakarta-born Epilogue, which specializes in French-Indonesian cuisine.

Still, there are the familiar chains such as Buffalo Wild Wings sports bar, and BLK 513 whose frozen yogurt has been enhanced by charcoal.

On local concepts, Rossini presents innovative Mediterranean cuisine and a bar. Huma Mediterranean is run by the high-end resort Huma from Palawan.

Other homegrown restaurants are Carnivale, famous for its movie and carnival-theme casual dining; and XO 46 Heritage Bistro, noted for classic Filipino cooking. The Butchery takes pride in its artisanal sausages.

In fashion and accessories, True Religion, the American handmade denim company, has its flagship store. Zero Halliburton’s famous aluminum suitcases have appeared on TV and in the movies, including James Bond’s “Quantum of Solace.”

The Japanese brand Paris Miki is touted as the best optical shop for its range of products and thorough customer service. Joseph is the British fashion brand that collaborates with upcoming designers.

Suyen Corp. will launch Assembly, a boutique of edited fashion, accessories and books.

Gan Advanced Osseointegration Center (GAOC), known for its dental services, will also be there.

One can get precision cuts at Kiyosa salon or have nails painted in designer colors at Calista.

Although there are no home stores, S Maison will set up popup outlets such as Potentilla for home scents, Bang & Olufsen for sound systems, Alice Blue soy candles, and Serene House which lays claim to purifying the air.

Following the success of Art Walk, an entire level of galleries at Megamall, and a gallery at SM Aura, S Maison has a sizeable area for new works. Tan says the art market is growing and, with it, the demand for exhibit space.