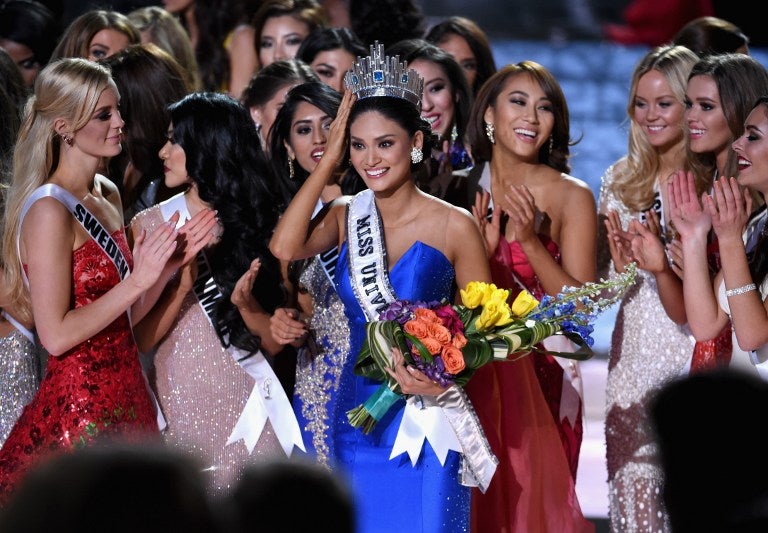 LAS VEGAS, NV - DECEMBER 20: Miss Philippines 2015, Pia Alonzo Wurtzbach (C), who was mistakenly named as First Runner-up reacts with other contestants after being named the 2015 Miss Universe during the 2015 Miss Universe Pageant at The Axis at Planet Hollywood Resort & Casino on December 20, 2015 in Las Vegas, Nevada. Ethan Miller/Getty Images/AFP

The Philippines has been abuzz about the upcoming hosting of the Miss Universe pageant, after the Department of Tourism (DOT) announced earlier that the global competition will once again be staged in the country, but the New York-based Miss Universe Organization (MUO) is still mum about this.

As of press time, the MUO has not come out with an official announcement saying the Philippines will host the 2016 edition. Local pageant insiders said the group may still be waiting for the complete turnover of the required hosting fees from the DOT before making anything official.

A source, who asked not to be named for lack of authority to talk about the matter, said that MUO may be trying to prevent another 2012 incident from happening, when it officially announced several host countries, which later withdrew.

The South Asian nation of Bangladesh initially declared it would host the global tilt’s 2012 edition. But the Bangladeshi president later announced that it will no longer stage the international competition, citing financial constraints as the reason.

Then the Dominican Republic sent feelers to the MUO, but also later withdrew its proposal because it could not produce the required amount that the group is asking.

As a consequence, the international organization settled for Las Vegas and staged the 2012 Miss Universe pageant in December, which was far from its traditional mid-year schedule.

During the latter part of Donald Trump’s hold of the MUO, the pageant had a hard time securing host countries, thus resulting in much later competition dates. In fact, the 2014 edition was staged in January of the following year. And if plans push through, it will be repeated again for the 2016 edition when the finals will be held in January 2017.

Trump divested from the MUO in 2015, making the Philippines’ Pia Alonzo Wurtzbach the first “post-Trump” titleholder.

Now Wurtzbach, the third Filipino woman to secure the international crown, is poised to crown her successor in her homeland.

Former Ilocos Sur Gov. Chavit Singson said it is “80 percent confirmed” that the Philippines will host the 2016 Miss Universe pageant on Jan. 30, 2017.

“Formalities na lang ang kulang,” Singson said in a media gathering he hosted in his Quezon City home on Aug. 13.

Singson confirmed being in talks with the MUO, and said the project only began taking shape when he got on board.

“At first they were having a hard time securing the $12 million (around P500 million) needed to host the Miss Universe in the Philippines, but when I talked to them, I was able to get the commitment of sponsors,” he shared.

The amount covers the hosting fees plus other logistical requirements for staging the pageant and hosting the delegates and the MUO’s entourage.

Singson also clarified that he is not a sponsor, but a “coordinator of sponsors.”

He confirmed securing the commitment of the Okada Group from Japan, with multi-million in fresh investments in the Philippines, to shoulder several millions of dollars to cover part of the hosting fee.

With businessman Tony Boy Cojuangco offering assistance, Singson said he also got tycoon Henry Sy of the SM Group to take part in the endeavor. “He agreed to the use of the Mall of Asia Arena for one of the huge activities of the pageant,” Singson said.

In line with President Duterte’s directive for the government not to spend even a single centavo for the Miss Universe pageant, Singson and his team are getting nongovernment organizations to take part.

“We’re planning to take the Miss Universe candidates to some of the country’s best destinations, including Vigan in Ilocos Sur,” Singson shared.

The capital city of his home province was declared one of the “new seven wonder cities of the world” in an online poll conducted worldwide.

He announced his recent acquisition of a luxury yacht, which, along with his fleet of private planes and top-of-the-line tourist buses from the private sector, will take care of the delegates’ transportation requirements.

The cities of Davao and Cebu, and the province of Bohol will also be tapped to host several activities, Singson added.

These are also the same destinations that Singson will explore in his new TV program “Happy Life,” helmed by director Eric Quizon.

Aside from featuring the beauty of the country, the program also showcases the spirit of the Filipino by rewarding deserving citizens with showcases that would match their needs and abilities.

“This will not be a dole out. We will be looking for deserving individuals who will get the chance to travel and receive surprise gifts,” Singson clarified.

For the program, Singson revived his family’s Northern Star Productions to mount the production. So far, seven of the 12 target episodes have been completed.

“Si Eric na ang bahala doon. Basta I will be accompanied by beautiful women around the country,” he said. “It will be seen either on ABS-CBN or GMA7, within the year.”

The production outfit will also venture in the movie industry, and is looking at Wurtzbach for a project to spark the company’s revival.

Wurtzbach is currently based in New York where she is expected to fulfill her responsibilities as Miss Universe.

She has already visited several countries, including the Cayman Islands, Ecuador, Indonesia and Peru, and is currently in Thailand for an official function.