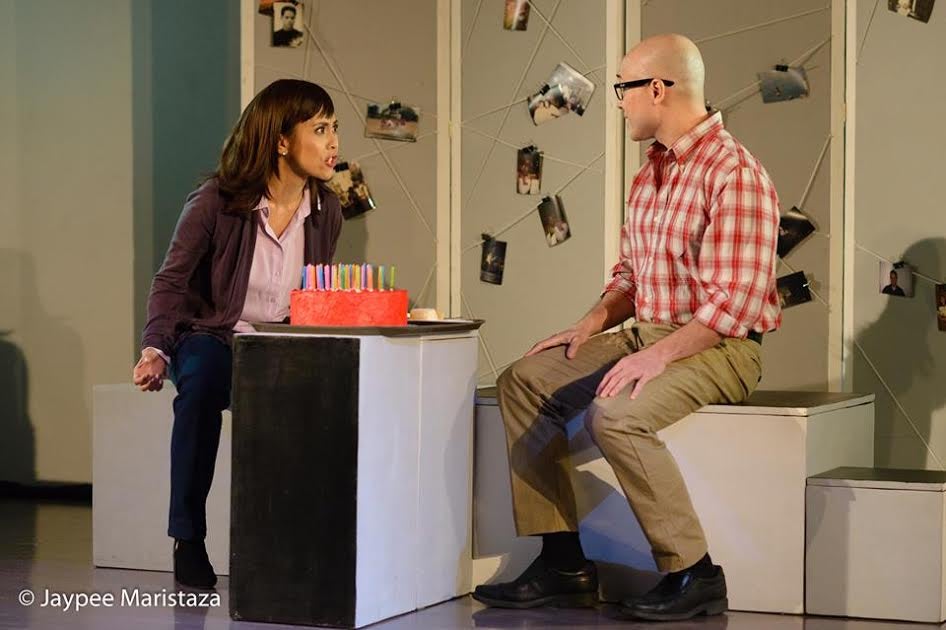 Rachel Alejandro and Joel Trinidad in Upstart Productions’ “Love/Sick,” which runs until today at the Mind Museum Auditorium, BGC. PHOTOS BY JAYPEE MARISTAZA

‘Love/Sick’: Fast, funny–but none too sticky

It seems appropriate to apply a digital term—stickiness—to a play that’s capable of resonating with the millennial crowd. “Stickiness” refers to the quality of a website—not necessarily tangible—that persuades users to stay on it, even return to it time and again. In the internet age, stickiness is pure gold and one of the currencies of online success.

Upstart Productions’ “Love/Sick,” a fast, furious 80-minute play written by John Cariani and directed by Joel Trinidad, could have used more of that stickiness factor. It is the type of production you enjoy during the actual performance, where you laugh and cry at all the right places—and yet, strangely enough, still leaves you quite unmoved in the end.

The disquieting thing about this is that Cariani’s material is obviously meant to be remembered long after the show is over. “Love/Sick” has been called by critics overseas as the dark version of “Almost, Maine,” another short play of his that similarly features a series of vignettes highlighting the messy nature of human relationships.

That so-called darkness is foreshadowed in the title. “Love/Sick” alludes to the thin line that separates love’s passion from its pitfalls, its nobility from its creepy obsessions. The nine vignettes that thread the play through sans intermission posit that love can be an addiction or an illness that, sometimes, one may need to relinquish for the sake of sanity.

Cariani’s dialogue draws you in with its wit and pathos. A lot of emotional calisthenics brew under the surface, and his lines tempt you to dig deeper.

Upstart’s cast gives earnest performances, but the power of each vignette largely depends on the chemistry or the rapport of the actors playing that particular storyline. The ones that stick to mind are played by the more seasoned performers like Rachel Alejandro, Noel Rayos and Trinidad himself.

First is the accidental reunion of old flames who quickly relive lingering desires and unresolved issues. Second is a gay couple’s wrestling with commitment when one of them has visible phobic reactions to love and all its expressions. Another is about a crazy lady playing mind and murder games to revive a boring marriage. And a couple literally one step away from the altar realize they don’t want to get married after all.

The veterans and the rest of the cast members—Teenee Chan, Bibo Reyes, Mica Pineda and Nicky Triviño—play the material in a straightforward manner. Perhaps that is where the disconnection sets in.

If “Love/Sick” is indeed meant to be the darker side of “Almost, Maine,” a little more exploration into the edge of insanity and euphoria would have been called for. Cariani’s material is edgy, provocative and alluring, as if there’s a surprise—
horrible or wonderful—waiting for you around the corner. Naturalism does not give this play full justice.

Perhaps that’s why the only surprise at the end is almost anticlimactic. Similar to “Almost, Maine,” the first scene is the last scene, making the whole series of vignettes one circular adventure—in this case, mostly in a shopping mall.

And maybe that is only apt. The commercial complex can be seen as a symbol of impermanence in our times, a portal into a rush of experience that happens now but is gone tomorrow. But love, as this play suggests, is far from being a shopping stint. Its questions haunt you, bite at you, make you re-examine your life. Cariani’s material was made to be explored, not rushed.