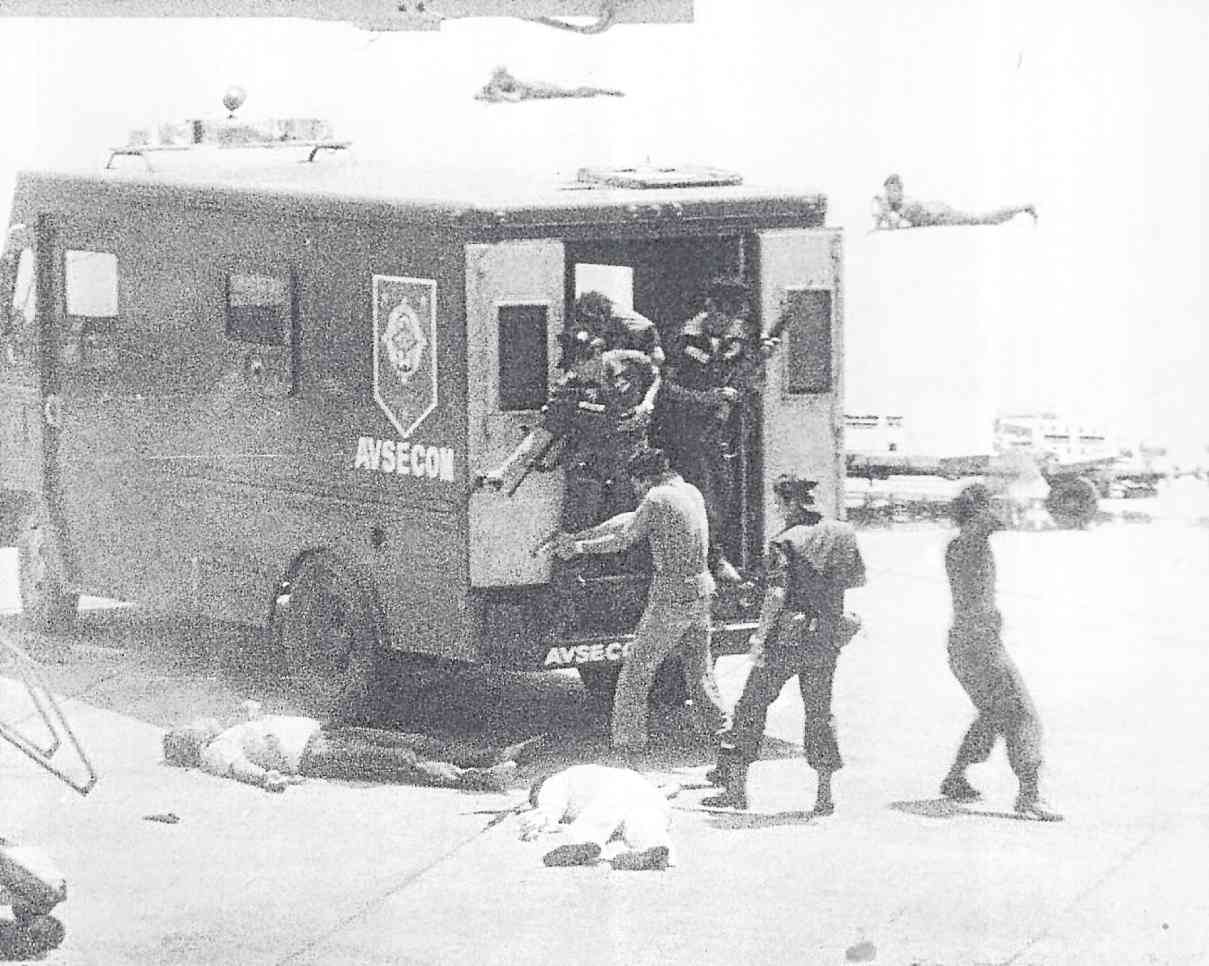 DRAMA unfolding. Images from the tarmac of theManila International Airport on Aug. 21, 1983. (Top row, from left) Avsecommen shoot the body of Rolando Galman, the alleged assassin.

For a certain group of Filipinos, the word “tarmac” will always be synonymous with “Ninoy.”

As schoolchildren, you learn that the word “tarmac” means a kind of paved road, particularly the runways of an airport. But if you were a Filipino of any age on Aug. 21, 1983, you remembered “tarmac” as the place where Sen. Benigno S. Aquino Jr. died.

It was a Sunday, but the Manila International Airport (MIA) was abuzz with  rumors that Aquino, the opposition leader exiled for years in Boston, was coming home.

Recto Mercene, the airport correspondent for the Times Journal, said he went to the airport early that day—7 a.m.—so he would not miss out on anything.

The gathered reporters and photographers knew Aquino would be flying in around lunchtime, so they were waiting nervously.

There was even a head fake. When a Cathay Pacific plane from Hong Kong arrived, Mercene and several photographers ran down the area near a baggage carousel thinking this was the flight Aquino was on. Mercene recalls a van belonging to the Avsecom (Aviation Security Command) rolling up and offering them a ride to the newly arrived plane.

“We said no,” Mercene said.

The plane proved to be a false lead, and the lensmen walked back the way they came to wait some more.

Ruben Alabastro, then a reporter with the Associated Press, arrived in the airport at 12, joining the throng of media in the arrival area near the VIP area. “We knew he was arriving on a China Airlines flight,” he said, explaining that sources in media and the Aquino family had informed them.

Mercene said the media liaison officer, Col. Vicente Tigas, produced a list of seven photographers, Mercene among them. Tigas led them to a jetbridge—the tunnel connecting the terminal to the planes—and they were told to wait there. It was Bay 8.

“This is where Aquino will come out,” they were told.

At 1:05 p.m., China Airlines flight 811 arrived at the MIA from Taipei. Aquino, under the pseudonym “Marcial Bonifacio,” was on it, having flown from Boston to Los Angeles to Singapore to Malaysia to Hong Kong to Taipei and finally to Manila.

Alabastro said they thought they saw a China Airlines plane land, but could not find a way out of the heavily guarded arrival area.

Mercene and the photographers in the jetbridge were anticipating passengers emerging from the aircraft when he heard a popping noise, “like a balloon popping.” Then he heard three similar sounds, one after the other, and he knew immediately they were gunshots.

“(The jetbridge) was soundproofed, so it took a while for the sound to travel,” he explained.

Mercene ran to the jetbridge window with his camera whipped up in front of him. He said he saw “two men fallen on the ground. Then the Avsecom van arrived and I saw one soldier firing his M-16 rifle at one of the men, I couldn’t tell which one.”

Mercene had gotten off a few shots when he saw another soldier raise his pistol. Mercene thought the soldier was going to shoot him, so he ducked and relied on an old photographer’s trick: He squatted so his head wasn’t visible in the window but raised his camera in his arms above his head and kept shooting. He was shooting blind.

“I didn’t know if I got anything,” he recalled.

Back in the arrival area, Alabastro now saw passengers from the China Airlines plane disembarking. The foreign correspondents came out first. The reporters saw one of the American correspondents on the flight and asked him loudly, “Is Aquino with you?”

Death on the tarmac

The gathered media men’s nervous energy exploded, and suddenly everyone was rushing out to get the story.

“I was surprised,” Alabastro said, noting how the other foreign correspondents were stone silent. What had begun as a heartwarming story of an exiled leader bravely coming home had turned into a death on the tarmac.

Alabastro remembered that the wire service United Press International (UPI) was actually the first news service to report the shooting. Alabastro called the development in to the AP office in Manila, where reporter David Briscoe built the rest of the story: “The plane arrived and this guy says he’s dead!” Alabastro then left the chaotic scene in the airport.

To this day, Alabastro, now an editor with Inquirer.net, said he can never forget hearing those words: “He’s dead!”

Meanwhile, Mercene had witnessed Rebecca Quijano—later dubbed “The Crying Lady”—crying and babbling as she walked away from the plane. Mercene looked around him, and suddenly got nervous. He still had no idea what was on his film.

He advised his fellow photographers: “‘We should get out, because they might arrest us.’ So we scattered.”

He made his way from one exit to another. “They were locked,” Mercene said, “but I got out through an elevator that only I knew about.”

Mercene actually left his car in the MIA parking lot for two days; when he returned to fetch it, he was afraid someone had wired it with explosives (it wasn’t).

By the time Mercene got to the Times Journal offices between 4 and 5 p.m., MIA general manager Luis Tabuena was waiting for him.

“Why is he here?” Mercene asked city editor Isagani Yambot (the late Yambot would later be Inquirer publisher). But Yambot had no answers.

Mercene ran to the photo lab and looked at the film. He was stunned by what he saw. His images—of a bloodied Aquino sprawled on the tarmac next to a bloodied Rolando Galman, with the Avsecom soldiers brandishing their firearms around the bodies, of the soldiers lifting a dead Aquino into the van—would become the world’s definitive portrait of Aquino’s death.

Mercene knew what he had—and that he wouldn’t have them for long if he didn’t do anything—so he told the lab technician to print as many copies as possible.

When government media officer Jolly Riofrir arrived that evening and asked Mercene for any photos he had taken at the airport, Mercene was ready. “I will give it to you on a silver platter,” he said he told Riofrir. “Of course, I did this because I already had the prints.”

The Aug. 22, 1983 edition of the Times Journal had three of the shocking shots on its front page. Its banner blasted “Aquino shot dead.” Mercene wrote one of the stories: “Newsmen hear shots as ex-solon debarks.”

The irony, of course, was that the Times Journal belonged to then First Lady Imelda Marcos’ brother Benjamin “Kokoy” Romualdez.

Mercene said he had always thought it was Yambot who had orchestrated that front page, but said he now thinks it was another “quiet and principled” editor, Bernie de Leon, who had done it. In fact, the desk then was manned by seasoned editors. What they had done was amazing, considering how scared they were of the military in general.

“The military was very powerful,” he recalled.

Those photos changed Mercene’s life. They were featured in publications around the world. It can be argued they helped spark a revolution. He would be called forth to give testimony about them when the Agrava Fact-Finding Commission investigated the Aquino murder.

He speaks of the photographs as someone who understands that these images defined his career. To this day, there is a drama of destiny, captured in stillness, reflected in them. Just look.

Mercene remains sanguine about the legacy of those images.

“I’m always proud of what I have done. It’s not because I was great, but I happened to be at the right place at the right time,” he said. “I don’t mind that I’m not paid now when they use the photos, as long as they use my name. I’m happy.”

Today, Mercene covers the Department of Foreign Affairs as a senior staff writer for the Business Mirror. But as  reporter and photographer, he still patrols the corridors of the airport now named after the most famous person who died there—the Ninoy Aquino International Airport. He walks the airport and listens to the sounds of planes landing on the tarmac again and again.