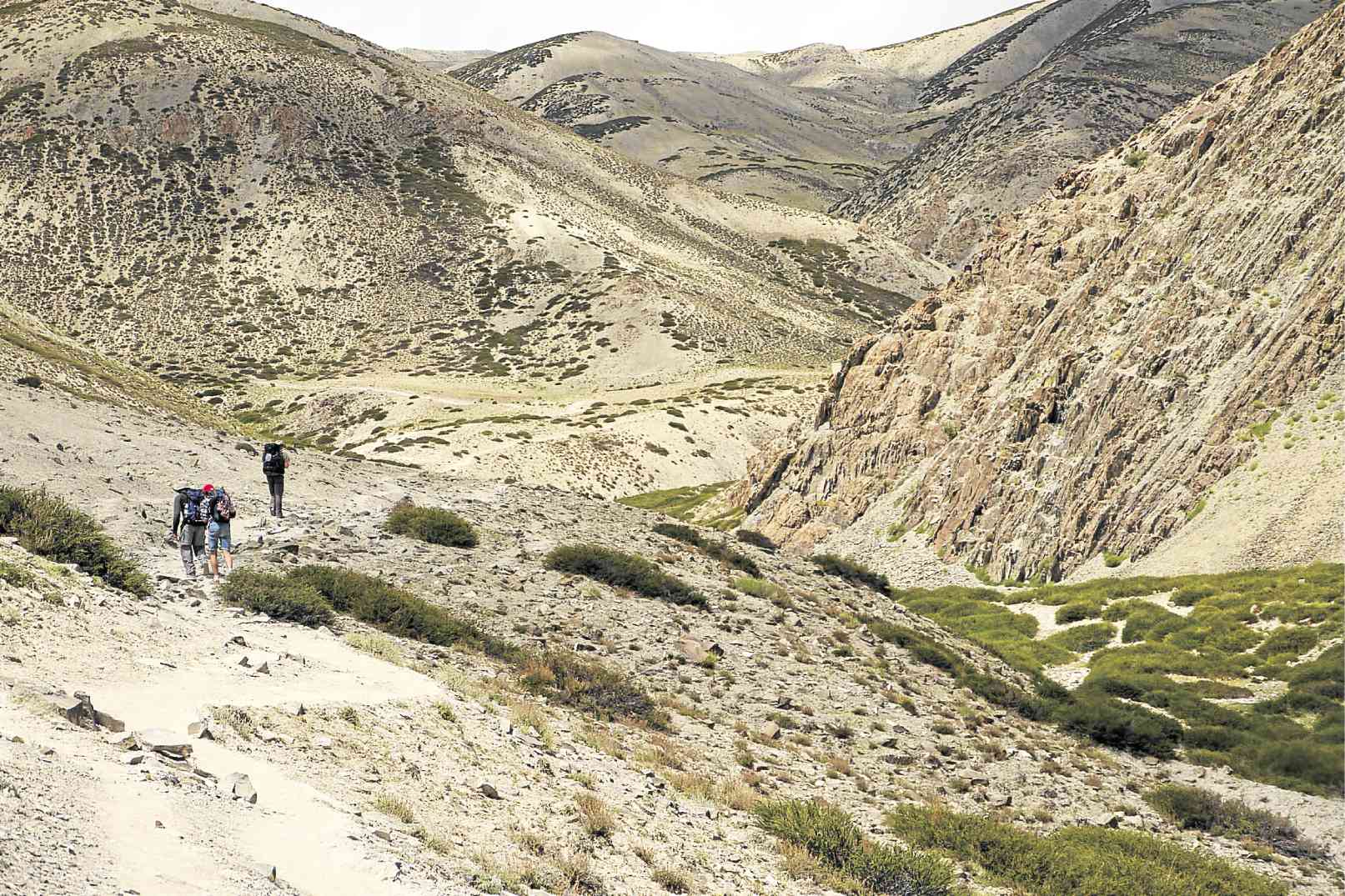 LIVING UP TO ITS NAME Nestled some 5,000 meters above sea level, the trail leading to the Ganda La mountain pass in the Himalayas offers a spectacular view of rocky terrain from all sides. NIÑA CALLEJA

Spiritual trek in the Himalayas leads to Dalai Lama

LADAKH,  India—It was high noon and I was gasping for breath as my trekking companions and I crossed Ganda La, a high mountain pass in the Himalayas. At close to 5,000 meters above sea level, the pass along a barren rocky terrain can easily make one dizzy.

I had set out on a seven-day trek to the Markha Valley of the Himalayas, a 75-kilometer route popular among visitors to this region. With me were four men from Israel, Australia, the Netherlands and France, and a local trekking guide whom I had just met at the start of our trek on Aug. 3.

I would be the slowest in the group, I warned them on our first day.  I had thought I was well prepared for the long trek, having practiced yoga for a month in Dharamshala in the Himachal Pradesh state of India, but true enough, my companions ended up miles ahead of me.

“Small steps and deep breaths,” Uri, our Israeli trekking companion said. That early, I knew the Himalayas were set to test not just our physical strength but our character as well.

I pushed on, one step at a time, until I saw the wall of carved stone tablets inscribed with the Tibetan mantra “Om Mani Padme Hung” which, according to Tibetan culture, contains all the teachings of the Buddha.

The Tibetan prayer walls, along with the colorful prayer flags fluttering in the breeze were a welcome sight, marking the top of the pass and buoying hopes among us that a village was nearby.

My trekking companions had been waiting for me at the top of Ganda La pass. We feasted on our packed lunches– cold and hardened chapati smeared with honey and butter, a popular staple in South Asia; boiled egg and potatoes wrapped in aluminum foil; a chocolate bar, and orange juice in tetra pack.

At the same time, we were treated to the glorious view of the immense Himalayan ranges, an out of this world desert landscape on all sides.  The road to Leh, a city in Ladakh, is open to motorists for only four and a half months, from May to mid-October, as snowfall blocks the high passes on other months of the year.

The second day of the trek was our longest, as we had to walk more than 12 hours to reach our homestay for the night. “When was the last time you had walked this long?” Joe, our Australian group mate, asked during our 11th hour on the trail.

I told him I had trekked to Mount Apo, the tallest mountain in the Philippines in 2014, and that my friends and I did it in three days, instead of the usual four or five days. He told me his was in Mount Mayon in the 1990s, with an Israeli mountaineer he had met there.

I could have easily endured this day were it not for the blisters on my feet. Walking in my trekking boots proved too painful so I changed to sandals. It was slowgoing, and I had no first aid kit, an absolute necessity for this kind of trek.  Fortunately, Erick, our kindhearted Dutch companion, had thought about blisters before coming to the Himalayas.  “It is nice to unload some weight,” he said, handing me his pack of first aid supplies. Every night I would treat my blister-covered feet with betadine ointment and bandages.

The seven-day trek had been meditative for me, a spiritual journey that gave me time to observe equanimity as we continued the long and arduous walk. India was, for me, the best country for spiritual exploration, being the birthplace of the world’s major religions. Many cultural traditions also regard the Himalayas as a sacred place and the home of the Gods.

Ladakh, which borders Tibet to the east, has a rich Buddhist culture evident in every household here, with their small shrines that had a picture of the Dalai Lama at the center. Other Buddhist statues and offering bowls, like a jar of barley grains, were also on display.

After our grueling trek, we sought refuge in homestays with Ladakhi families in their homes of sun-dried mudbricks and stone walls adorned with yak’s hair and horns. It was the best way to immerse one’s self into the region’s culture.

There were touching attempts to bridge the language barrier, as when our female host offered us a cup of local wine made from barley. “Chaang, chaang?” she asked her mystified guests.  After she showed us some grains of barley, I took a sip and felt warmth in my throat. “Good,” I said, giving her the thumbs up sign.

We spent our last night in a tent in Nimaling, a beautiful and vast green pasture land in Markha Valley, with a view of the snowcapped Kang Yatze mountain.  It was freezing cold and the heavy rain in the night made it worse.

On our last day, we had to cross the last and highest pass called Gongmaru La, which has an elevation of 5,130 meters. I reached the top after three hours and basked in the collective feeling of triumph among some Germans who had arrived before me.  But not everybody was pleased.  Our Ladakhi guide, in fact, reprimanded me.  “I have been waiting for you for the last 30 minutes,” he complained.

I lost my cool. This was not the first time he scolded me. On our third day, he told me I didn’t have the “energy to acclimatize” and that I should not have chosen the Markha Valley trek. So this time I shot back that he could go ahead anytime as I did not need a guide. It was easy enough to navigate the trail replete with footprints and horse manure most of the time.

Later in the afternoon, I found my group mates and our guide resting inside a tent, which served as a tea shop for trekkers taking a break. I had not sat two minutes when our guide said we should go as we had been delayed so much. He was about to say how long he had been waiting for me when I cut in:  “You claim to be Buddhist, but you lack compassion!”  For me, Buddhism is synonymous to love and compassion.

I burst into tears on the last stretch of the trek, probably because of anger and exhaustion.  Along the river, a Ladakhi woman greeted me. “Julley,” she said, which in Ladakh means both “hello” and “thank you.” I sobbed even harder because she looked like my mother when she was younger. I have always been mistaken for a local because the Ladakhis bear much resemblance to Filipinos.

It was close to 5 in the afternoon when we reached Shang Sumdo village where a van that would take us to Leh waited.  “We made it,” I said, feeling a sense of accomplishment despite all my energy being depleted.

But my journey would not be complete without finding the Dalai Lama, the spiritual leader of Tibet. I thought that since I would be staying in McLeod Ganj, a suburb in Dharamsala, to practice yoga for a month, this possibility was not too remote.

Since his escape from the Chinese authorities in Tibet in 1959, the 14th Dalai Lama has been residing in McLeod Ganj along with the Tibetan government in exile.

I had seen Martin Scorsese’s “Kundun,” the 1997 film about the Dalai Lama from the time he was found by the search teams looking for the latest reincarnation of the last Dalai Lama, up to his dramatic escape to India.

I was in McLeod Ganj when the Tibetans celebrated the Dalai Lama’s 81st birthday, but he was in the southern part of India at that time, I was told. So I abandoned any hope of seeing him at all and continued my journey to Leh in Ladakh.

On my return from the trek, I heard from the locals that he was visiting and would be holding a public teaching in Thiksey Monastery on top of a hill.

After a shared taxi ride to Thiksey early the next day, I found the grounds below the monastery filled with thousands and sought a media spot at the aisle within striking distance of the Dalai Lama.  Having coverEd the historic state visit of Pope Francis to Manila in January 2015, I saw how different the security and people’s reaction to the two religious leaders were. The people around the Dalai Lama were more contemplative and there was no mad rush to get near or touch him. A local policeman even allowed me to take photos near the stage even if I didn’t have a press ID.

So there he was—the Dalai Lama, sitting on a wide golden chair and speaking in Tibetan, which was being translated to Ladakhi over a loudspeaker. While I couldn’t understand a word, I was sure his three-hour long speech was sprinkled with anecdotes and jokes because he often laughed and smiled.

I was completely mesmerized. I had actually thought of approaching him and asking one political question—about China—but the journalists following him said this was not possible as I have to write his office a request letter first.

But just seeing the Dalai Lama was enough; it was a beautiful experience that capped my 10 days in the “Land of High Passes,” as Ladakh is known. TVJ

(Niña Calleja is a former Inquirer reporter who resigned her job to travel to remote parts in South Asia. She covered then Davao City Mayor Rodrigo Duterte on the campaign trail in one of her last reportage for the paper.  You can find some of her stories at www.afterdeadlines.com)

An OFW’s dreams soar: She wants to scale the Himalayas