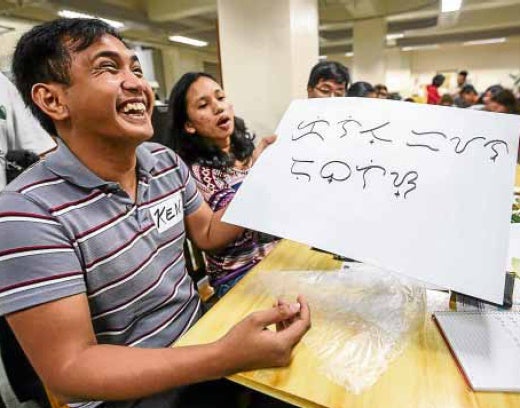 In a world where “new” and “fast” are operative words, two Filipino millennials have put this precolonial writing system into contemporary use, either as ethnic designs on art, clothing or tattoos, or as a language worth knowing and reviving through workshops and online courses.

Kabuay, who resides in California, wants to focus his energy on using the ancient script “for economic promotion” that, he said, would lead to its preservation.  Aside from using baybayin in different art forms since 2007, he has also been holding workshops on it in the United States and Manila.

“I go beyond cultural identity. The only way something will be preserved is if it has (commercial) value,” Kabuay told Inquirer in an e-mail interview.

Following a calligraphy craze in the country, the native script attracted support from today’s generation, mostly in the form of tattoos which Kabuay said, people find more personal because it “shows their individualism” and, as skin art, will be with them for a long time.

The popularity of tattoos and calligraphy helped boost interest in the ancient script as “another way of expression and writing,” agreed Leo Castro, head of the group Hibla Sanghabi, who thinks the script’s appeal among the young can be traced to it being easy enough to learn.

The nongovernment group conducts research and workshops on Philippine cuture.

“How would your name look like in baybayin? It’s just 17 characters with a few simple basic rules, so with some supervision, you’re good to go,” said Castro who conducts baybayin workshops regularly, with coffee shops often inviting participants for a fee.  More recently, the workshops are conducted in public schools.

“We present baybayin as not merely learning how to read and write the script, but as a showcase of the beauty of the language and of how precolonial Tagalogs lived,” he said.

“I often ask (workshop attendees) what they notice when they arrive at the airports of China, Japan, Thailand, Korea,” Castro said.  “Well, the signs are mostly written in their own native scripts.”

Cabochan, 20, believes that learning baybayin is “beneficial to society as a whole.”

“I think all Filipinos deserve to know the truth about their own history and culture,” Cabochan said of the syllabic alphabet that Tagalog speakers used to record their language prior to Spanish colonial rule.  “I think it is solid evidence that we have our own writing system.”

Cabochan learned baybayin while studying another course. “Actually I self-studied baybayin when Hibla Sanghabi went to our school and gave a free workshop on it. Then they contacted us later to become members,” she added.  She now teaches baybayin—usually for free—to students and other Filipinos in events organized by the group.

Kabuay said he was in high school when he first discovered the script.  “When I saw a Katipunan flag, I thought the “ka” was a capital letter “I” for Independencia. Later I was told it was our old writing system.”

He added: “The passion for (baybayin) came when I moved back to the United States after living in the Philippines. I was looking for something to fill a cultural hole.” He then started learning more about indigenous cultures and other forms of Asian writing and incorporated them into his art.

Cabochan said she “felt bad” that it was only in college that she learned about the country’s rich history and culture.  She was also disheartened when she realized that the knowledge was not disseminated widely.   “As dramatic as it sounds, I believe that it can change lives as it changes the way we view each other,” she said.

Augusto De Viana, head of the University of Santo Tomas Department of History, couldn’t agree more.  Baybayin, he said, is “a symbol of our identity … that was even used by the Katipuneros as a symbol of their nationalism.”

The prehispanic script, Cabochan said, is solid evidence that the Philippines was independent from other countries and that it had a civilization of its own even before Filipinos were colonized.

Mindful of this, Kabuay is determined to promote the ancient script among the young using the latest social media apps from Facebook, Instagram and Snapchat. He also launched his own company specializing in custom art, translations, books and apparel that focus on the baybayin.

In the works is an eight-week long online baybayin course that would be tested in five universities. The online course might later be offered in college at varying rates: from free to paid, for the premium version.

Much to be done

Meanwhile, Cabochan has opted to practice baybayin in her everyday life by translating the words she sees around and the names of her friends into ancient script. “I practice baybayin by myself by translating words I see on billboards so I won’t forget,” she said.  “I think it’s important for everyone to start within themselves before they could propagate it.”

As much as there is budding support from different groups, much remains to be done before baybayin is truly embraced by people, the two millennials agreed.

According to Kabuay, the script’s current cultural revival is superficial and cosmetic, especially in the form of tattoos. Sadly, most of them don’t even know or want to know what their baybayin tattoos mean, he said.

For Cabochan, the deeper meaning of being Filipino continues to elude the younger generation who, she said, still needs better education and a better way of being taught history by their elders.  “I personally knew a different version of Philippine history before I entered college and studied at UP,” she said.

De Viana said the general lack of interest among Filipinos was one of the biggest challenges of teaching baybayin, while Kabuay cited its lack of practical application.

“There is a revival but the question is, what’s next after art, tattoos, workshops, etc? How will our native script put food on the table? How will it create jobs? How can it help define our national identity?” he asked.

Cabochan remains undeterred. “I stay in the hopes that someday all Filipinos will understand, take pride in, and love our own culture, for it is a very beautiful and rich one,” she said. TVJ

A US-based revival of ‘Baybayin’