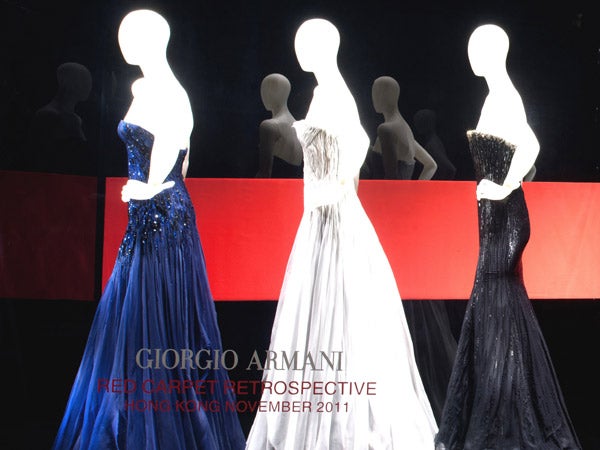 Armani red-carpet gowns on show in HK until Nov. 28

YOU probably have to be an A-list movie star to don a custom Giorgio Armani dress. But you don’t have to be a star to see up close one—or a dozen—that’s been worn on the red carpet. You will, however, need a plane ticket to Hong Kong.

Until Nov. 28, the legendary Italian designer is holding a retrospective exhibit of his most popular red carpet dresses worn by the likes of Anne Hathaway, Beyonce, Jodie Foster, Marion Cotillard to such high-wattage events as the Academy Awards, the Golden Globes, the Cannes Film Festival, among others.

The exhibit is the highlight of the relaunch of the newly redesigned Armani/Chater House concept store in Central Hong Kong, which opened in 2002. Its size is second only to the fashion house’s inaugural boutique in Milan.

Emporio Armani, the house’s secondary line, is also marking its 30th year with a photographic installation at the adjacent Chater House boutique. “Momenti di Emporio” is a collection of images originally published in the brand’s magazine in the last 30 years.

The red-carpet exhibit was first shown in New York in March 2010, with the “solar system” dress worn by Lady Gaga at the Grammys as the centerpiece. At Armani/Chater House, the most recognizable pieces are the fully sequined, scoop-back gown worn by Anne Hathaway at the Golden Globes 2010, and a blue satin sheath the actress wore hosting this year’s Oscars. There’s also the red strapless dress Katie Holmes wore to the Met Gala, as well as a chainmail dress worn by Beyonce.