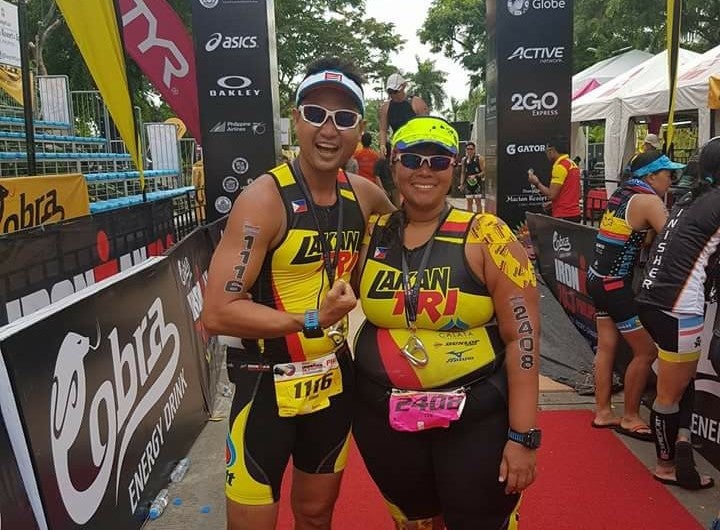 With 10 seconds left on the clock, Maria Khristina Fontillas ran as fast as she could toward the finish line and emerged an Ironman—a name reserved only for the toughest.

In the endurance race of the fittest and fastest, she drew applause and admiration, from both spectators and triathletes.

At age 37 and 240 pounds, Fontillas finished the 1.9-km swim, 90-km bike and 21-km run in eight hours and 54 minutes, and became the final recipient of the “iron heart” medal designed by Kenneth Cobonpue.

[Related story: A medal worthy of an Ironman]

The crowd waiting at the finish line of Shangri-La Mactan did a countdown as Fontillas dashed to beat the cutoff.

“The moment I crossed the finish line, the announcer said something like ‘Maria Khristina concluded the Ironman 70.3,’” Fontillas told Inquirer Lifestyle.

With three kilometers left to cover, a marshall told her she had only 15 minutes left. She started computing if she would make it, since she had never run that fast. Fontillas just went for it.

“I gave maximum effort, so much  that when I was finally done I didn’t cry. I was just dizzy because of how fast I was going,” she added.

Last Sunday’s race was Fontillas’ second stint in the individual category of Ironman 70.3, and her second time to finish the highly competitive race that drew 2,978 participants from 43 countries.

Of the three events in the triathlon, her strong suit is swimming, and  she enjoyed the cool breeze of the Cebu bike course.

Fontillas admitted that while the run was always the hardest part because she already felt drained, she was recharged by the encouragement of the crowd.

Cobra Ironman 70.3 Asia-Pacific Championship is half the distance in miles of the triathlon competition that originated in Waikiki, Hawaii. Triathlon is the combination of three endurance sports—swimming, biking and running—made to test the toughest athletes in the world.

In 2011, after watching her husband John Paul race in the Ironman 70.3 in Camarines Sur, Fontillas decided to join the race, as well. She noticed that her husband struggled with the swim course, and thought she can easily finish the swim.

The next  year, Fontillas joined the swim relay with her husband, who did the biking, and a friend who did the run.

After two years of swimming in the relay, Fontillas got bored, shifted to the bike relay, and got bored again. In 2015, she registered for the individual category.

However, she thought it would be impossible for her to run.

It took five months, going from zero to running a full marathon—42 km—to overcome the hurdle.

Fontillas registered for the Condura Marathon in preparation for the Ironman 70.3 race. She registered for shorter distance runs, too, picked up running tips from the internet, and went training with her triathlon team,  LakanTri.

“I thought if I could finish a 42k marathon, I would be  ready for Ironman,” Fontillas said.

She finished the uphill and downhill course of the marathon that ran through the Skyway in eight hours.

Fontillas works out with her triathlon team in Bulacan and Clark, Pampanga. On Tuesdays and Thursdays, the team runs in the morning and bikes afterwards, while they swim for two hours on Wednesdays. Weekends come with rigorous training as the team goes for long bike rides, four to five hours, in Pampanga.

“The most challenging for me is the bike training because we cover a 100-km distance. It’s so hard mentally because you’re at the tail end and the weather is so hot,” she said.

Monday is her favorite day of the week because it’s rest day.

Aside from her husband, her father and her sisters also joined the Ironman 70.3 race.

Efren Martinez, Fontillas’ father, who participated in the individual category of Ironman in the 65-69 age bracket, said, “If you see my kids you will not believe that they race because they are heavyweights.”

Indeed, Fontillas is a heavyweight in the competition—a fighter.