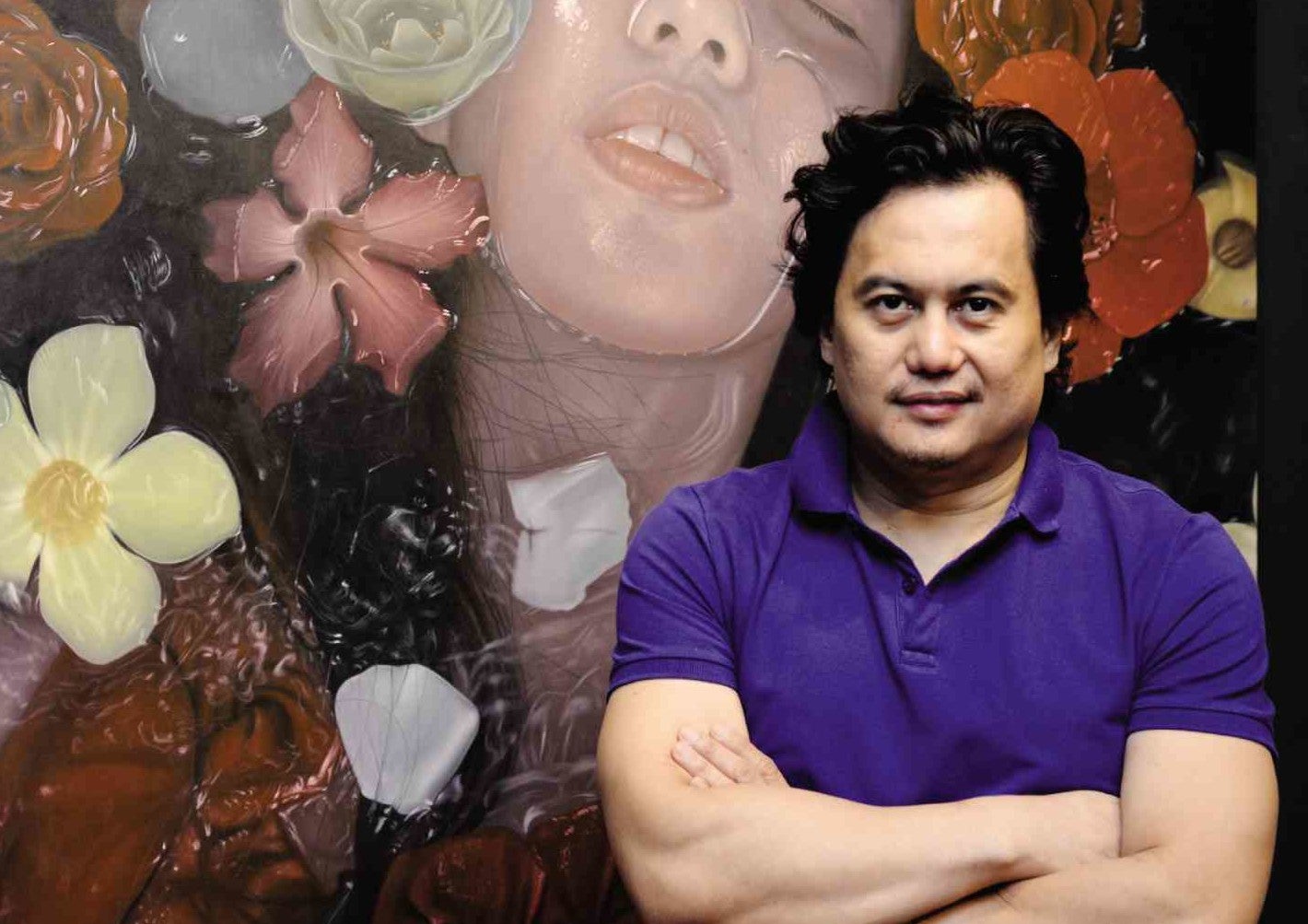 A LARGE painting of a red horse, red combat soldiers and a warplane in front of a stone relief of medieval warring crusaders was apocalyptic. Demet dela Cruz painted similar doomsday themes of the horse with contrasting images, as if saying that what happened in the past was going on in the present and into the future.

These pieces exhibited at Provenance gallery make the viewer look again and think.

Style arbiters and entrepreneurs Raul Francisco and wife Joanna Preysler have transitioned from developing and retailing merchandise to nurturing creative expression—at a price.

With five clothing and accessories boutiques and two decades of fashion experience, the couple’s sixth venture, Provenance at Shangri-La at the Fort, aims to show the best artistic talents and draw in more people to appreciate Philippine contemporary art.

Their business partner, Derek Flores, is a well-informed art world professional who gathers  and mediates with the artists. Francisco and Flores put structure into the exhibit, where the spotlight is on the artistic genre and the featured artists. Preysler extends herself to encourage emerging talents and support the veterans.

“We wanted to give a platform to contemporary artists committed to their craft, and who deserve attention,” says Francisco, the gallery’s managing director.

The couple’s foray into the gallery world was born of years of collecting. Visitors to their residence would be awed by their collection. The walls are filled with works by expressionists Manny Garibay, Andres Barrioquinto, Jason Cortez, Winner Jumalon, mixed media and performance artist Kawayan de Guia, cultural activist Norberto Roldan, and New York artists Ernest Concepcion and Mia Herbosa, to name a few.

“May angas (there’s badass). Impactful art doesn’t have to be pretty. Art is something that is experienced,” Francisco said. “Joanna and I have one common denominator—the human element.”

Francisco is learning to understand the idiosyncrasies of the art world. Flores, the co-managing director, had a career in banking and embassy work. An avid art collector, he followed the careers of such talents as Barrioquinto, whom he now manages. He represents Barrioquinto in Christie’s and Sotheby’s auctions.

Flores has been educating the couple on the emerging talents in the local art scene.

When Shangri-La at the Fort offered a space, Francisco and Flores decided to take the risk, with the aim of establishing a still-untapped market in Taguig.

Unlike the clean white walls common in most galleries, Provenance’s space exudes an urban, sophisticated ambience.  Classic hardwood herringbone flooring, a chandelier and a period round table are set off by raw concrete walls.

“It’s rough luxe. Once artists come here, they are in awe,” said Francisco.

With his network in the arts scene, Flores recommends artists and guides the couple on how to represent artists in a harmonious and productive manner and how both the gallery and artists benefit from each other.

“The work is the star. We bring artists together,” said Francisco.

The gallery’s long-term goal is to bring Filipino artists abroad, and to invite foreign artists to their space.

“The artists are given the attention they deserve,” adds Francisco. “We are trying to initiate a collector base where people can experience an exhibit in a relaxed ambience. The environment is conducive to art appreciation. Young artists are happy if their exhibits are shown at that level.”

Provenance opened last March with Barrioquinto, whose 13-piece collection was sold out. With a Cultural Center of the Philippines Thirteen Artists Award and works at the Singapore Art Museum, Barrioquinto priced his works from P800,000 to P1.5 million.

Unlike Barrioquinto’s seven-figure price tags, the works of upcoming artists such as Bryan Teves are more accessible, without compromising their aesthetic standards. The prices range from P10,000 to P250,000. Some exhibits averaged P24,000 to P33,000. Flores pointed out that in one of the exhibits, the most expensive piece was P70,000.

Preysler added, “We’re trying to enlarge the pie and introduce new collectors to art. We try to be inclusive and bring different segments to Shangri-La at the Fort.” She notes that  young professionals are setting aside P30,000 to P60,000 to purchase artworks and start a collection.

“The higher purpose is not just to hold exhibits. We want to educate the public. Between exhibits, we can offer art appreciation talks. We’re putting out art that ranges from affordable to premium,” said Francisco.

As an added feature, Provenance uses state-of-the-art anti-fraud detection technology which allows the art to be assessed for extensive checks.

To Francisco, the art scene has provided a learning experience, especially in dealing with artists’ egos.

“You’re not exhibiting for the sake of exhibiting,” he said. “There’s a right time to launch a solo versus group show. It comes when the artist has reached a level of maturity. You learn about the nuances, the players, politics and influencers.”