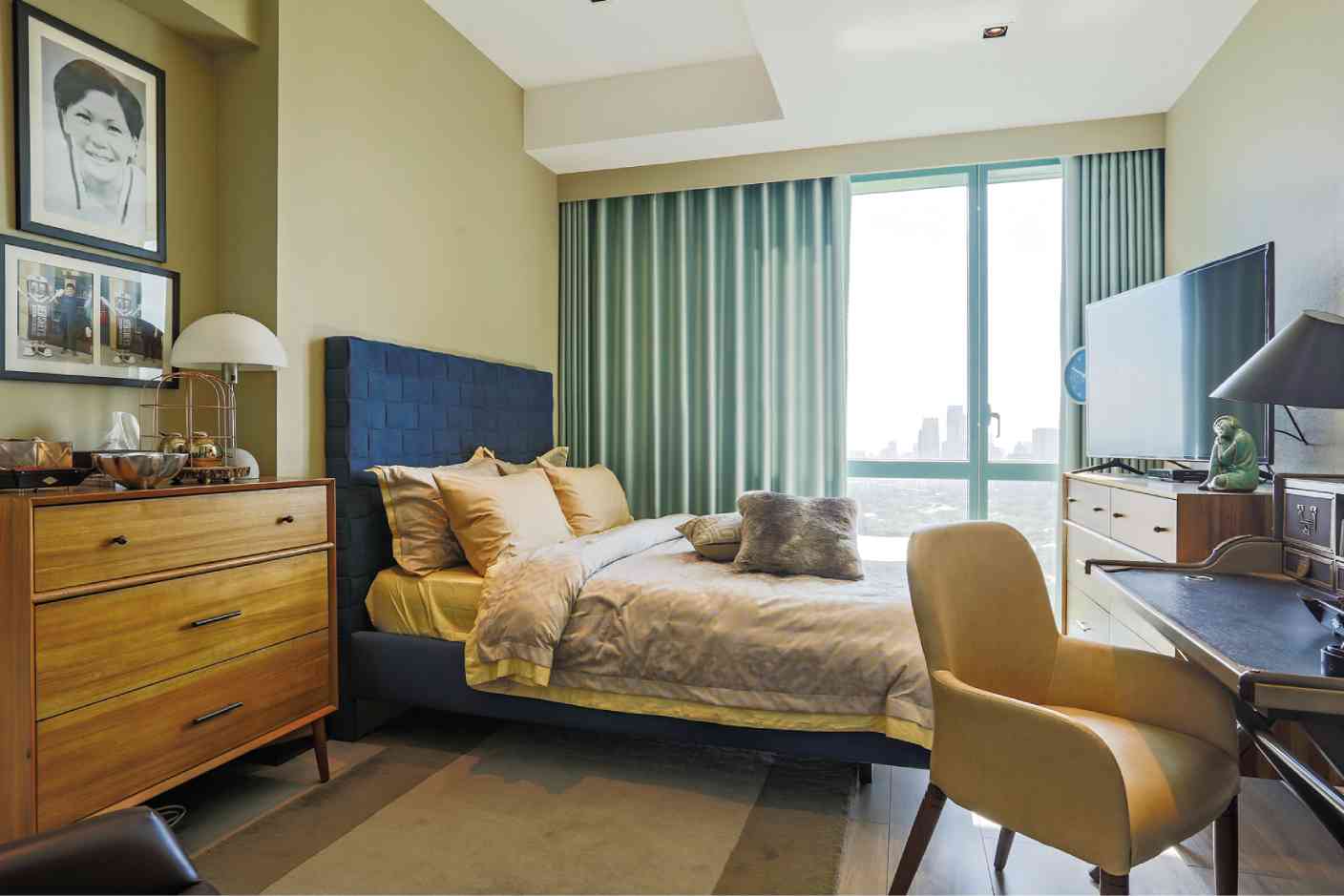 ECLECTIC décor, a style that harmonizes disparate periods, textures and colors, is a favorite of many interior designers. While it’s fun to mix and match, it’s also a challenge not to make the room look like a mishmash of styles.

Interior designer and furniture maker John Vigila pulls it off in a bachelor’s pad by sticking to a neutral color scheme, choosing key pieces with strong, clean lines, and finding common threads such as surfaces and accent colors.

After working hard for so many decades, his client, an executive, rewarded himself with an elegant condo.

Vigilia establishes a neutral palette as the canvas with pops of blue and contrasting colors and patterns to spruce up the spaces.

The open plan of the apartment is filled with mirrored walls that double the illusion of works by Ruel Obemio, Ramel Villas, Kris Abrigo and Vigilia’s furniture company  FinoPino.

The tactile and inviting feel of the home is created through the play of wood, metal and glass.

Since the 100-sq m condominium has no formal entry, Vigilia creates a sense of arrival with a mirrored wall on one side and a blank wall on the other.

He explains that this leads the eye to the focal point of the foyer, a circular scrap metal installation by Sam Penaso and a metal-and-glass console by Eric Paras for Industria.

Vigilia’s workshop, FinoPino, made the dark mahogany-framed furniture in the living and dining areas that anchor the neutral color scheme.

The playful rattan loops that hold up Kenneth Cobonpue’s coffee-table set off the formality of the streamlined sofa and the vintage tub chairs.

The designer discloses that the tub chairs are cast-offs. They are given new life with leather on the seats and printed fabric on the outer covering to match the patterned carpet.

Vigilia visually connects the dining room by repeating the same materials of mahogany, metal and textured upholstery in his dining table and chairs and Industria’s console.

The open plan living and dining areas rely on accessories such as the flamingo-foot side table from Kish,  Iñigo Elizalde’s bold,  ethnic-patterned pillowcases, and retro pendant lamps and chandeliers with a  Danish Modern look.

The floor lamps and lighting fixtures are characterized by strong circles that echo the storybook figures in Obemio’s paintings and Penaso’s round metal sculpture. The serpentine-shaped bowl lends a quirky touch to the prim table.

Although the client shopped for objects of quality, a lot of them had to be edited to avoid clutter, while some of the excess ended up in the bedroom.

Still, the eclecticism is obvious.  Vigilia contrasts the dark mahogany frame of the leather safari desk with the light wood and simple lines of the mid-century drawer.

A leatherette bucket chair is placed alongside a Chinese container end table. A painting of a man with a bicycle on his head by Villas adds wry humor in the room.

While the public areas are bright and open, the owner’s man cave is typically dark, furnished with black leather sofas and a leather chest coffeetable. It has an unexpected accessory—Kish’s stool/ storage, inspired by the Tagbanua tingkop basket.

Vigilia is touted as an upcoming designer. A graduate of interior design from the University of the Philippines, he sought a mentor to help him establish his style. He credits his six years with Budji+Royal Architect +Design for refining his sensibility.

Design maven Budji Layug emphasized the importance of visual continuity and cohesiveness, starting from the landscaping and architecture to the interior and the ambience.

When the young interior designer established his firm, John Vigilia Design, it was easy for him to work on projects.

“Other designers who worked with other mentors were at a loss,” he says. “I learned from Budji to look at the total design and I thank him for that.”

More important, Layug trained him to develop an eye for scale and proportion, or how the size, shape and spacing of objects relate to each other. As a result, the independent beauty of each element is appreciated in an eclectic setting.