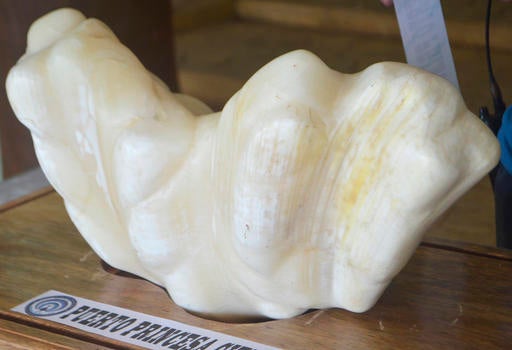 For 10 years, possibly biggest pearl was hidden under bed

MANILA, Philippines — A Filipino fisherman in western Palawan island has found possibly the world’s biggest pearl, but he didn’t know it.

For 10 years, the 34-kilogram (75-pound) pearl was hidden in a bag under a bed. The fisherman’s family would rub it with their hands before going out to sea in the belief it would bring them luck, said relative Aileen Amurao.

Amurao, who is also Puerto Princesa city’s tourism officer, said Thursday that the man gave her the pearl last month for safekeeping because he was moving to a new place.

The pearl was sitting on a bench in her home for weeks until she found time to check the internet, and she was shocked to learn that it could be the world’s biggest at 2.2 feet (67 centimeters) long and 1 foot (30 centimeters) wide.

The fisherman, his father and brothers found the irregular-shaped pearl inside a giant clam that stuck to their boat’s anchor when they sought refuge from a squall on a reef, Amurao said.

The fisherman did not want to be identified, she said.

She said that she, the fisherman and his family decided to turn over the pearl to the city mayor, who had it displayed in a glass case in Puerto Princesa’s city hall to attract tourists. The fisherman will receive a still-unspecified reward from the local government, Amurao said, adding that he never intended to sell it.

Experts from the University of the Philippines have expressed interest in inspecting the pearl, but she said no date has been set for their visit.

It would not be the first time giant pearls have been found off Palawan.

A 9-kilogram (20-pound) pearl, called Pearl of the King, was found in Palawan in 1939, and is on display in a hotel at the central island resort of Boracay. Local media have reported that fishermen had recovered other huge pearls in the province, including one reportedly weighing 24.75 kilograms (54 pounds).