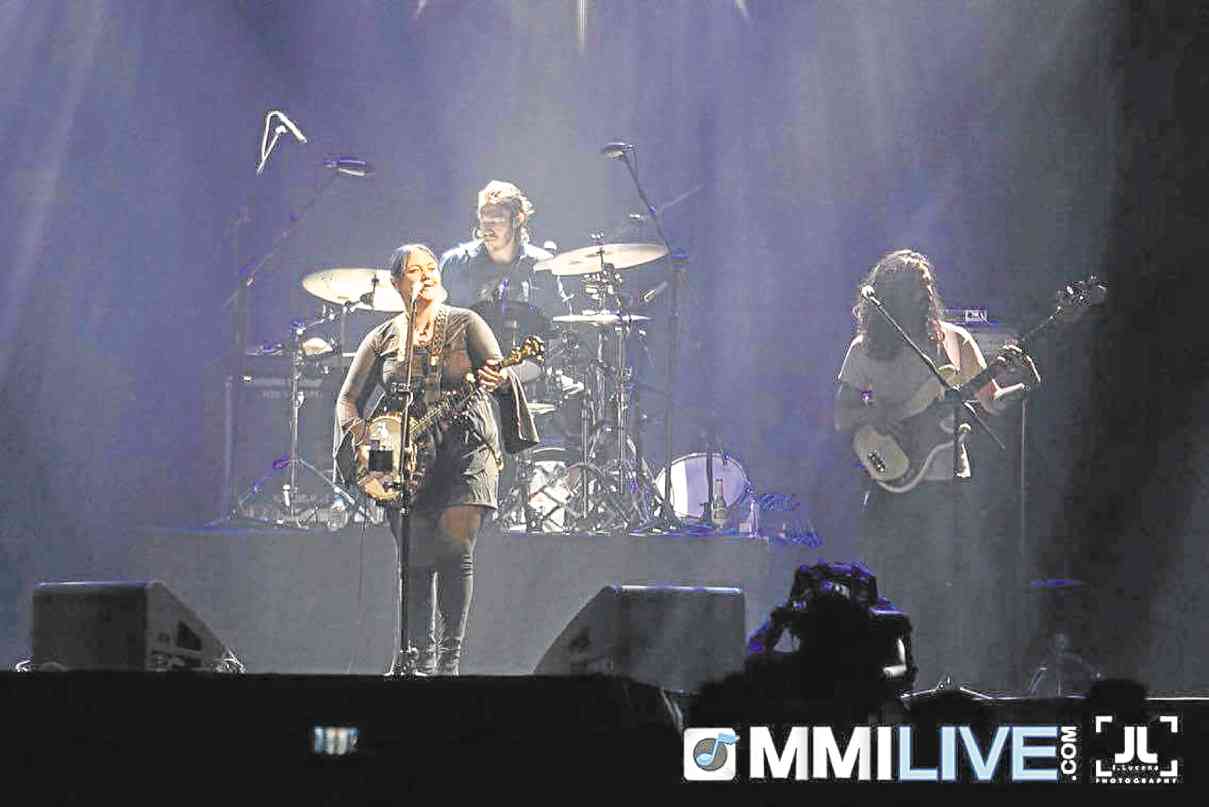 Six acts, seven hours, one stage—we couldn’t think of a better way to spend a rainy Thursday night than watching our Spotify playlists come to life through a massive pop-rock extravaganza.

Mounted by MMI Live and Ovation Productions, “In The Mix” was held last Aug. 18 at SM Mall of Asia Arena and featured a heady mix of chart-toppers from the ’90s to the present: The 1975, James Bay, Panic! at the Disco, Third Eye Blind, Elle King and Twin Pines.

Below are some of our favorite moments from the music fest:

Rousing ‘twin’ openers receive a warm Pinoy welcome. They may be largely unknown on this side of the globe, but the first two acts did a great job in warming up the predominantly millennial crowd. Fresh-faced Scottish trio Twin Pines earned their fair share of high-pitched squeals as they kicked off the night with fun, synthpop ditties like “Young Heart,” “Get By” and “Given Enough.” The reception prompted the lads to tweet how amazing the Manila crowd was right after the show. In all caps. Awww.

As the only female artist in the lineup, banjo-slinging American darling Elle King held her own with her sassy brand of pop, rock and bluegrass, led by the hot Grammy-nominated single “Ex’s and Oh’s.” We hear she was pretty excited to get in touch with her Filipino roots (her father, actor Rob Schneider, is of Filipino descent) and learn some Tagalog while at it!

Throwback Thursday with Third Eye Blind. It was the older millennials’ turn to relive their teenage years as American alt-rock band 3EB greeted Manila for the second time (they had their first show here back in 2008). Stephan Jenkins and Co. obliged the slightly older crowd with the requisite hits from the ’90s and ’00s: “How’s It Gonna Be?,“ “Never Let You Go,” “Losing a Whole Year,” “Graduate,” “Jumper” and “Semi-Charmed Life.”

They even threw in a cover of Daft Punk’s “Get Lucky.” For us, the highlight of this trip down memory lane was realizing that 1) we could still rap/sing along to “Semi” after all these years, and 2) songs like “Jumper” endure because of their power to help ease a friend’s pain, and maybe save a few more lives in the process.

The band also performed a couple of new hits: “Everything is Easy” from the post-hiatus album “Dopamine,” and the sociopolitically charged single “Cop Vs. Phone Girl,” which Jenkins explained wasn’t really being played in the United States due to its controversial themes of racism and police brutality. “Thank you [for playing it here],” he said.

Panic! at the Disco’s party set. Another returning visitor, P!ATD lived up to its name by putting on another audiovisual feast that left everyone breathless and screaming for more—and we’re not just talking about frontman Brendon Urie’s falsetto, chiseled abs and mid-song backflips.

The set list spanned the band’s 12-year flashy retro-punk repertoire: from the smash pop debut “I Write Sins Not Tragedies” and “Miss Jackson,” down to high-energy tracks like “Don’t Threaten Me with a Good Time” from its latest album, “Death of a Bachelor.”

We have the “Suicide Squad” movie soundtrack to thank for P!ATD’s rendition of the infallible rock-opera classic “Bohemian Rhapsody,” and it was even more hair-raising when witnessed live. Urie and his new crew also busted out a cover of Journey’s “Any Way You Want It,” before closing their set with the fist-pumping rock anthem “Victorious” amid an explosion of confetti.

James Bay’s soulful Manila debut. Fans got a welcome break from the post-P!ATD adrenaline rush with British singer/songwriter James Bay, who commanded the stage with his soulful set of pipes and mean guitar skills. Decked in his trademark fedora and a Philippine flag-themed jacket, the lanky, long-haired twentysomething channeled his inner Springsteen and rocked with his backup band to a bluesy version of Creedence Clearwater Revival’s “Proud Mary” and his Grammy-nominated folk-rock hit “Hold Back the River.”

He serenaded the swooning fans with the acoustic version of the ballad “Let It Go,” which was an incredibly beautiful and bittersweet moment. It was made even more memorable by the crowd swaying and singing softly along to the song, the entire arena bathed in pink and purple lights from remote-controlled LED wristbands. Three words: So much feels.

Matty Healy being Matty Healy onstage. One can always expect a fun-filled, flawless performance from British outfit The 1975, which is why it can draw massive crowds in Manila no matter how many times it has visited.

Well, that and Matty Healy’s endearing bad-boy charisma. From the jaunty opening grooves of “Love Me,” “UGH!” and “Heart Out,” the curly-haired frontman smoked, sang and sashayed his way through the band’s two-album catalog in a trench coat (which he mercifully took off shortly after). Healy had an emotional moment when, toward the end of the heartrending love song “fallingforyou,” he fell on his knees and cried, and the smitten crowd gave him a few seconds to compose himself, before he launched into the mid-tempo track “Somebody Else.”

Of course, the screamfest wouldn’t be complete without the quartet’s trifecta: “Girls,” “Chocolate” and “Sex,” the song that never fails to raise chaperones’ eyebrows whenever underage girls chant its title.

More afterthoughts: What we loved about the whole production was that it was all held indoors, effectively removing concerns about unpredictable weather conditions. The remote-controlled LED wristbands that periodically lit up and changed colors along with the stage lights were a very nice touch, as they intensified the mood per song.

Incidentally, the artist lineup was a big blessing for music fans who would have liked to attend “Summer Sonic” but couldn’t; five of the six artists here were also part of the aforementioned two-day music fest in Japan. But more than that, the lineup made sure there was something for everyone to enjoy; whether they’re young diehard fans or the adult chaperones sitting at the back of the arena, people left the venue smiling and satisfied.

We can’t wait to see what the next “In The Mix” installment will bring.