Thanks to a food stain, Heart Evangelista has a thriving career as a painter–of Birkin bags | Inquirer Lifestyle ❮ ❯ 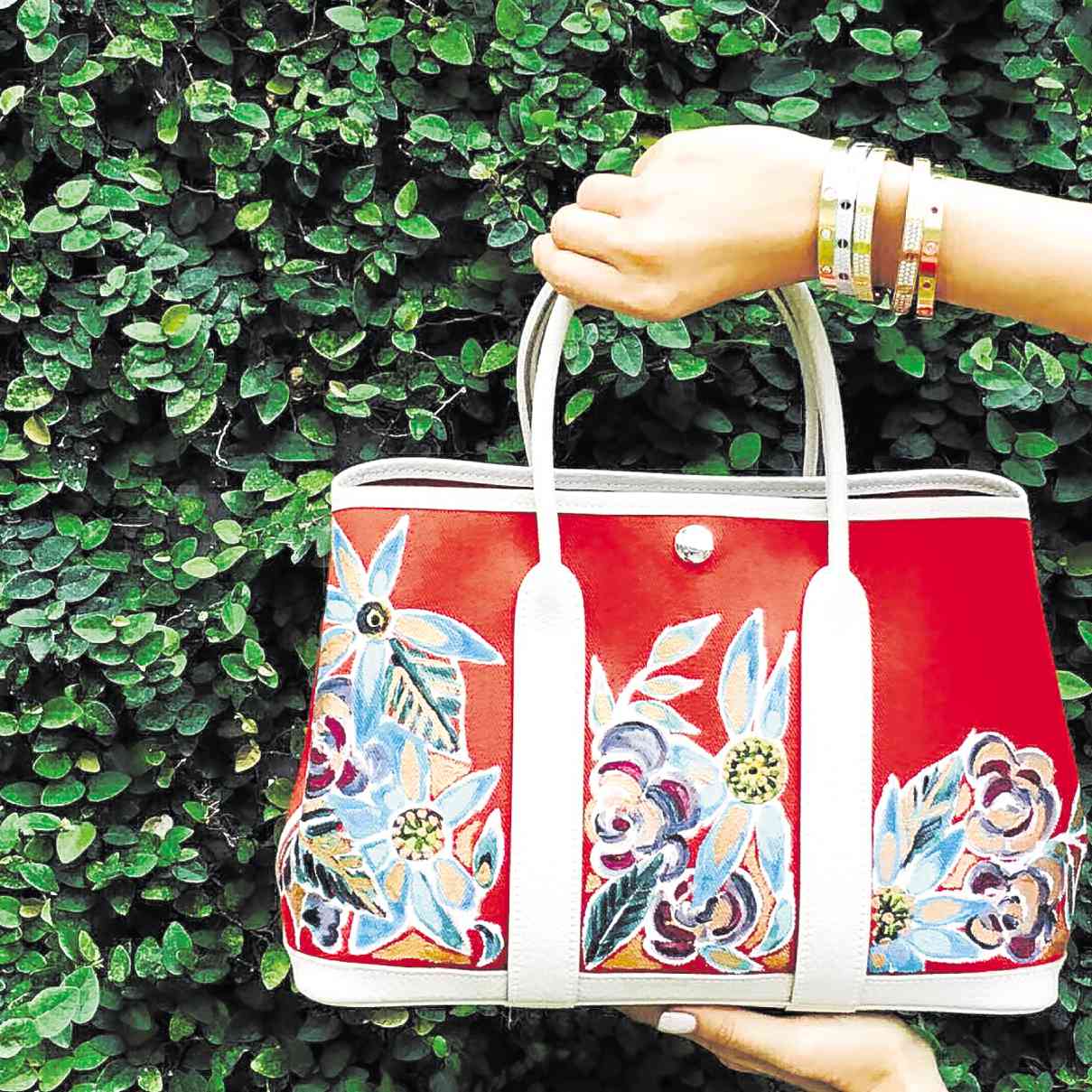 Thanks to a food stain, Heart Evangelista has a thriving career as a painter–of Birkin bags

Heart Evangelista wears her art through her hand-painted Hermès bags. She said it started as a cover-up project after chili fries almost ruined her beloved orange Birkin.

“I was eating French fries with cheese, and accidentally dropped some on the bottom of the bag. It left a big oil map. Masakit talaga!” she says.

The pain is understandable, since a brand-new Birkin can cost anywhere from $12,000 to $200,000 or more, depending on the material.

The 31-year-old actress wouldn’t reveal how many Hermès bags she owns, but admits she buys a new one with every new telenovela, which “guarantees income in the next four months.”

She considered having the bag professionally repainted, but it didn’t guarantee getting rid of the stubborn stain. While researching on the best solution, she chanced upon a story about Kim Kardashian’s hand-painted Birkin being auctioned in Europe and thought, why not paint the bag herself?

Evangelista, after all, has sold out paintings in her previous art exhibits, starting with “I am Love Marie” at Ayala Museum in 2014, which featured a series of dreamy female portraits. She has mounted more solos, including one in Singapore titled “Love Marie.”

Painting paved the way for Evangelista to launch her “Love Marie” brand, lifted from her real name Love Marie Ongpauco-Escudero. It was a move to distinguish herself as “Love Marie,” the artist, from “Heart,” the artista, and perhaps to compensate for having shelved her artistic side for so long.

“I’ve been doing the same thing in show biz for the past 18 years, but I haven’t really stopped painting since I was a little girl, doodling on walls and Vogue covers,” she shares. “I started painting more during a very sad stage in my life when I was having issues with my parents; painting was therapeutic for me.”

Her then boyfriend, Sen.  Francis “Chiz” Escudero, gave her a big canvas so that she could paint her feelings out. It was a purging that produced artworks which established her as Love Marie, the painter. Eventually, she would nick a more unusual niche—the painter behind Hermès bag art.

After finding a suitable acrylic paint that would hold, Evangelista remedied the oil stain on the orange Birkin with a floral painting. She posted a photo online, and got a “crazy number” of inquiries and orders from collectors.

“I got nightmares doing my first commissioned bag, a vintage, frayed Hermès owned by a friend who trusted me,” Evangelista says, laughing. “I dreamt I did a mistake, and the painting got bigger and bigger while I was fixing it; it was a lot of pressure.”

Evangelista has since painted over 40 canvas and leather Birkins, Kellies and Herbags with bright images of birds, kois, flowers and her trademark female figures. These bags “now count as artworks,” she says, including those owned by Jinkee Pacquiao and stylist Kat Cruz-Villanueva.

She can do yours for P90,000, “as long at it’s Hermès,” but you can’t dictate the design since “it’s the artist’s call.” She turned down a client asking for a portrait of her baby, and another who was giving a luggage.

She also doesn’t adhere to a deadline, although she can finish one bag in half a day when the inspiration comes along, or after listening to soothing music from Lana del Ray and Sarah Brightman.

Her tip to keep the paint fresh: dehumidifying silica gels in and out of the bag, and proper storage.

To the curious bagaholic who wants to see the bags up close, Evangelista will be showcasing 40 painted Hermès bags—hers and those on loan from her clients—in the exhibit “Carry Your HeART.” It will run Sept. 3-9, at the Volkswagen Showroom in Bonifacio Global City, and will also feature her upcoming line of locally produced painted clutches.

Evangelista says she accepts only a limited number of orders, to give her clients exclusivity. She updates her skills through travels and museum visits so each bag has its own look.

She might also stop painting Hermès bags next year to focus on other Love Marie projects, which include the clutch collection, home and perfume lines, and a cookbook she’s writing with her mom. Yes, she’s on better terms with her family now after her high-profile wedding with Escudero.

She’s also working on having a baby next year.

“I’ll be 32 next February. I’m on a strict diet to make my body fit for pregnancy,” she says. “But for now, I am focusing on painting; I feel more appreciated as an artist than as an actress. People find artists more interesting as they age, and the works increase in value.”