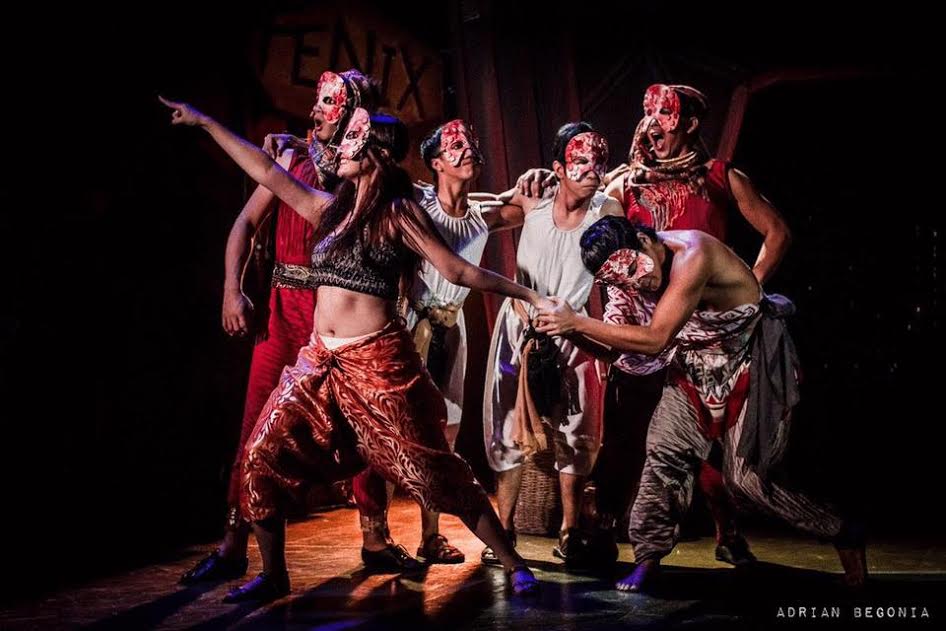 “Ang Katatawanan ng Kalituhan,” running until Sept. 11 at Wilfrido Ma. Guerrero Theater in UP Diliman, is the Filipino translation of William Shakespeare’s “The Comedy of Errors,” by Palanca award-winning playwright Guelan Luarca, directed by Alexander Cortez. PHOTO BY ADRIAN BEGONIA

And how apt that it is about mistaken identities, given how that phrase has dominated headlines lately, though hardly in a funny context.

“[The play] starts with impending death, with Act 1, Scene 1 establishing that dark tone. But by Scene 2, it’s already hysterical. In between Acts 1 and 5, the comedy of mistaken identity comes out. But even mistaken identity can be very tragic.”

The story is about a father named Egeon and his search for his identical twin sons who were separated from him in a shipwreck. His search leads him to the city of Ephesus, where all kinds of misadventures unfold.

While “Ang Katatawanan” is a faithful translation of Shakespeare’s text, Cortez says Luarca was able to make it very contemporary.

“That’s the beauty of Shakespeare. You can have a translation based on the original work and still adapt it to present-day situations; it’s in the manner of presenting it.”

Directing Shakespearean plays is not new territory for Cortez. For DUP, he has directed “Macbeth,” “Richard III” and “Measure for Measure,” and has also acted in “Much Ado About Nothing” and “As You Like It.”

Incidentally, he acted with Guelan’s father Ward Luarca in 1978, for Rolando Tinio’s adaptation of “As You Like It” under Teatro Pilipino at Cultural Center of the Philippines.

“Now I’m working with the son; isn’t that wonderful?”

“‘The Comedy of Errors’ was the very first Shakespearean play I translated,” says Luarca. “I was in fourth year high school; Sir Ron Capinding asked me to do it.”

“Sadly, I lost my soft copy when my old laptop broke down, and my hard copy got eaten by maggots after [Typhoon] ‘Ondoy.’ So when Sir Dexter [Santos] and Sir Alex contacted me to translate it, I said yes immediately, recalling how much fun I had translating it years ago. So this one for DUP is completely new, and I think, a lot better since I’m now nimbler with the language.”

In between the two translations (2009 and 2016 versions) of “The Comedy of Errors,” Luarca translated and adapted other Shakespearean plays like “Troilus and Cressida” and “The Tempest” (with BJ Crisostomo).

When it comes to translating the Bard, Luarca says he looks up to the works of National Artist for Literature Rolando Tinio.

“From Tinio, I learned that a strange mix of what we call classical, ‘literary’ Filipino and contemporary ‘kanto’ Filipino is best when translating Shakespeare’s comedies. It’s helpful to recall that Shakespeare himself used a mixed register of courtly and idiomatic, ‘taverny’ language in both his tragedies and comedies.

“So I aimed to create poetic sounds and to catch Shakespeare’s sense, hopefully so that the actors can sell the translation first as a piece of classical, literary writing. But really, look at my translation and you will catch strange, contemporary-sounding choices here and there as an attempt to reflect Shakespeare’s ‘tongue in cheek.’”

All in all, Santos says DUP has staged 15 Shakespearean plays, excluding “Katatawanan.”

“Revelations” is the theme of DUP’s 41st season, which also offers Leoncio Deriada’s three new one-act plays under the collective title “Distrito de Molo” (Oct. 12-30), to be directed by Mabesa.

Playwright Rody Vera and director José Estrella’s “Faust” follows on Feb. 15 to March 5, 2017. Ending the season is Floy Quintos’ new work “Angry Christ,”  a play about the controversial Filipino expat painter Alfonso Ossorio, to be directed by Santos, and will run from April 26 to May 14, 2017.