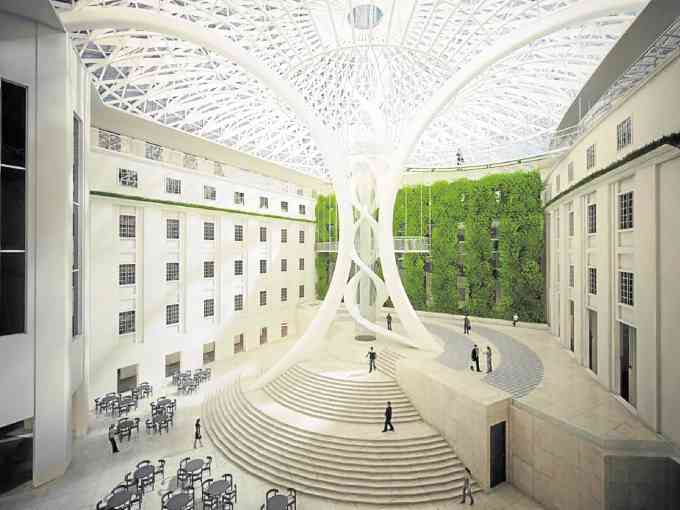 “TREE of Life,” for theMuseumofNatural History

Let Marcos be buried in Ilocos–it was his final wish

Your mantra for the week: I allow God to be in charge; therefore, each day is a miracle.

WHEN people talk of loving unconditionally, they always react as if it were only the ideal and very difficult to achieve. They assume that we have to overlook all the weaknesses of another human being, as if we were excusing it. But, to me, unconditional love simply means being kind, and that is not too difficult to do, especially when you have guidelines on how to be kind.

Let me offer you the IAMIST’s strategy for effective unconditional loving:

Stop forcing your good to appear; work on attracting it through your good words and deeds, which include the practice of praying and meditating.

Stop living in the past or future; NOW is the only time there is. Remember that old sticker that reads, “God IS.”

Stop being suspicious, give the benefit of the good.

Stop envying, just keep in mind that you are next.

Stop being jealous… jealousy is believing you are not good enough.

Stop worrying, start decreeing. The holy book says, “Decree a thing and it shall be done unto you.”

Stop talking about other people’s difficulties, especially your own; spread the good news.

Stop depending on someone else for your happiness; all you need is God within.

And, if you feel you want more tips, come and join us in our Spiritual Enrichment Sessions every Sunday, 4 p.m., at the function room of Old Swiss Inn Restaurant, Somerset Olympia Tower along Makati Avenue, just beside Peninsula Manila.

In the yet unfinished  Museum of Natural History, the former Tourism Building on Agrifina Circle, stands a P335-million stainless-steel-and-glass “Tree of Life” (funded by the Philippine National Museum Foundation, Inc.) rising to the height of six stories with an elevator on its central shaft that allows you to view the spectacular architecture that surrounds it.

The tree forms a circular canopy that covers the central courtyard of the building. This unique feature was designed by the husband-and-wife team of architect Dominic Galicia and interior designer Tina Periquet.

Two thumbs-up to this talented couple. We are in awe of your artistry.

In the first week of August, the very gregarious Marivic Vazquez scheduled a really belated birthday dinner for two Geminis, Rene Puno and myself.

However, when she found out that two of her other guests, Francis de Leon and Edwin Josue, were celebrating their birthdays in August, she decided to honor both as well, making it a four-way birthday festivity—until the four of us insisted that she be included for being an August celebrator herself.

So the evening finally turned out to be a five-way celebration at the popular Caruso Restaurant of Emilio Mina.

It was nice seeing Jerry Sibal who reminded me that he and Edwin were New Yorkers and became “husband and husband” in 2015 after 24 years of being together. They are here preparing for a repeat of “Noli Me Tangere, The Opera” at the Cultural Center of the Philippines in January 2017 after 30 years of its premiere presentation with Fides Cuyugan Asensio.

Jerry and Edwin, being legally married to each other, led an interesting dinner conversation about marriage, same-sex or otherwise.

Our hostess, who once upon a time was married for a few years but has now been simply living in with someone else for the last two decades, said, “The arrangement is just splendid. On my birthday, I will be abroad with friends and Philip, who does not enjoy traveling, stays behind, and it works out perfectly well. No marriage necessary.” So we all looked at Jerry and Edwin and this was their defense—“We just got married to assure ourselves of its benefits that we could not enjoy otherwise.”

Twice in a month

When I asked Jerry why he migrated to the US, he recounted how he was car-napped twice, a month apart, in the Banawe area. The first time, he reported the loss and nothing happened. The second time, he was almost killed because he refused to get out of the car so the carnappers had to literally drag him out of the vehicle at gunpoint, which makes the story rather comical instead of the serious situation that it was. I wonder whether Jose Rizal loved Josephine Bracken as much as Jerry loved his car. What car-ma!

On Aug. 16, there was a petition sent to PRody through change.org, allegedly from the Ilocos Region, to bury former President Ferdinand Marcos in his birthplace beside his mother, Doña Josefa Edralin Marcos, as was his last wish. The petition claims that this message was relayed through the late former Vice President Salvador “Doy” Laurel.

This confirms the stories of my aunt, Dr. Lourdes Pascual, whose murder six years ago remains unsolved. She was not a social tita, but a real aunt, being a cousin of my mother Priscilla. Tita Tuding was one of the closest confidantes of FM and often referred to him, in endearment, as “Andy.”

She was also a cousin of Imelda, but ironically, was not particularly fond of her. By the way, Tita Tuding was the first Filipino woman to go to China to study acupuncture as “arranged” by her Andy.

I was with her three days before her murder and, she said, “I have been getting death threats for my refusal to surrender Andy’s STAR DOCUMENT that contained his last will and testament, which superseded all other testaments.” She was strangled with a wire and her face covered with a pillow to ensure her death. It was a slow, painful death. The walls of the rooms in her Talayan residence were dismantled, probably in the hope of finding said document. More than that, the house was literally torn apart and valuable icons stolen.

I can believe the Ilocano petition because Tita Tuding repeatedly said that Doña Josefa was not exactly enamored with her daughter-in-law, because she favored someone else for her son.

The petition further stated, “Resting in Ilocos was also the late President’s wish—and it is a wise thing, to be buried close to the people that mattered most to him. If he is to be given a State Funeral on the account that he was a former President, let it be here in Batac, Ilocos Region—that would be fair. But to allow him to be buried at the Libingan ng mga Bayani will be an injustice to the thousands of people who were tortured and died under his dictatorship, and an affront to the legacy of your own mother (Soledad Roa-Duterte), who fought against his martial law, too.”

Imelda Marcos, when asked what she thought of all the objections to the burial of her dictator husband Ferdinand at the Libingan ng mga Bayani, said, “I do not understand why the Left and Right are objecting when my husband was always in the center” …hold them up high so clean and bright, clap them softly one two three, clean little hands are good to see—that is the classic way that Imelda skirts the issue of all that was done during martial law. I have heard of money laundering but now, the Marcoses have started a new process called HISTORY LAUNDERING.

E-mail the columnist at [email protected]; visit www.GeorgeSison.com and www.iamism.org. Listen to his “Positive Session” radio program on DWIZ 882 AM every Saturday, 9-10 p.m.