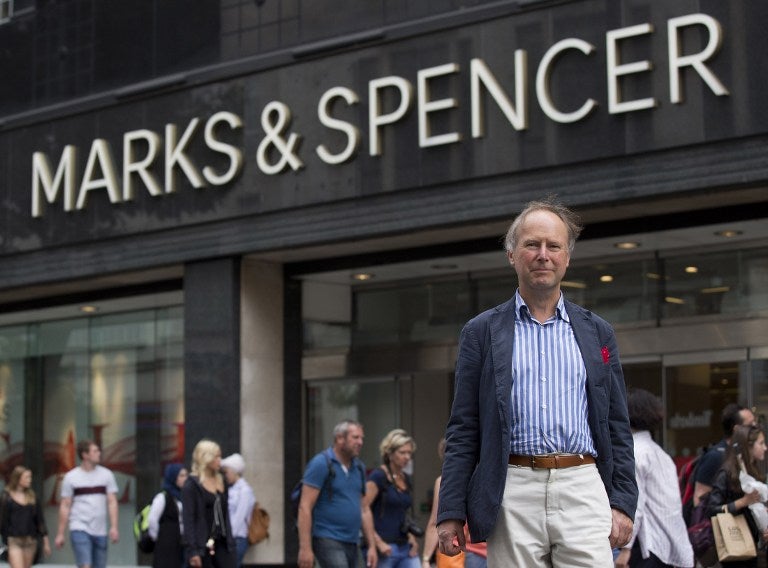 Nigel Rodgers of the Pipedown campaign group poses for a photograph in front of a branch of Marks and Spencer on Oxford Street in central London on August 18, 2016. Nigel Rodgers has campaigned against the canned music which is common in British shops and other public spaces for 24 years but his group Pipedown recently scored its biggest success yet. One of the country's top department stores, Marks and Spencer, said it would stop playing music after a letter writing campaign by hundreds of Pipedown's 2,000 members. / AFP PHOTO / JUSTIN TALLIS / TO GO WITH AFP STORY BY KATHERINE HADDON

Quiet battle for the sound of silence in UK shops

LONDON, United Kingdom — Nigel Rodgers is in hell. A campaigner against piped music for decades, he stands in a shoe shop on London’s Oxford Street which is blaring out loud pop music, wincing visibly.

“It’s just as bad as passive smoking,” said the 63-year-old, sporting a blue blazer with a red handkerchief in the top pocket and eagerly eyeing the exit.

“It really is enough to drive most people bonkers if they have got any sensitivity at all.”

Rodgers has campaigned against the canned music which is common in British shops and other public spaces for 24 years but his group Pipedown recently scored its biggest success yet.

One of the country’s top department stores, Marks and Spencer, said it would stop playing music after a letter writing campaign by hundreds of Pipedown’s 2,000 members.

Now the group hopes to persuade other major retailers to follow suit as sister organisations take off around the world, including in Germany and the United States.

Rodgers is far more comfortable sipping a cup of tea in the relative calm of the Marks and Spencer cafe a few doors down on London’s busiest shopping street.

Here, he gently explained how he believes the mechanization of society has turned up the volume on the modern world, causing health problems like hearing damage and raised blood pressure.

“We live in a continuously noisy environment,” he said. “We’re being artificially stimulated all the time in a way we’re not designed to.”

Rodgers, who also writes books on art history and philosophy, founded Pipedown aged 38 after becoming frustrated by piped music in a restaurant where he was dining with a girlfriend.

The group kept growing and, as well as letter writing campaigns, many supporters now go shopping armed with cards complaining — politely of course — about piped music which they hand to shop workers.

“It’s not just a matter of one or two neurotics — it’s a much bigger problem,” Rodgers said.

“Attitudes can change very fast — I’m hoping the M and S decision may mark a tipping point,” he added, blinking slightly as plates clattered in the background.

By contrast, industry figures argue piped music can make shops a more, not less, pleasant environment to be in.

“If there’s no music, you’ll hear arguments, noisy children — all sorts of noise which is present but you don’t hear because music masks it,” he told AFP.

England said shops like to play a mix of two or three musical genres to appeal to their customers, varying the tempo throughout the day — mellow in the mornings, energetic in the evenings.

The biggest sign of success can be if shoppers do not even realize the music is there, he said.

“There certainly is a paradox. If you’re doing it well then the customers won’t notice — they won’t compliment you, they just won’t complain,” England added.

Professor Adrian North of Australia’s Curtin University researches the impact of music on consumer behavior and believes few businesses are using it properly to communicate with customers.

Studies he has worked on suggest that playing the “right” kind of music in commercial environments could boost sales by as much as 20 percent.

The wrong music “would usually have effects that were worse than playing no music at all.”

Back on Oxford Street, thronged with tourists visiting London over the summer holiday period, shoppers were split on whether they loved or loathed loud music in shops.

“It takes a lot more energy walking into this kind of store — I tend to avoid them,” said Martin Persson, a 34-year-old visiting from Sweden, outside the shoe shop which Rodgers found so noisy.

But Zyad al-Shoeeb, a 22-year-old from Saudi Arabia, loved what for him was the novelty of thumping beats as he picked out his latest designer footwear.

“The music fits with the shoes — it helps me buy quicker,” he added./rga