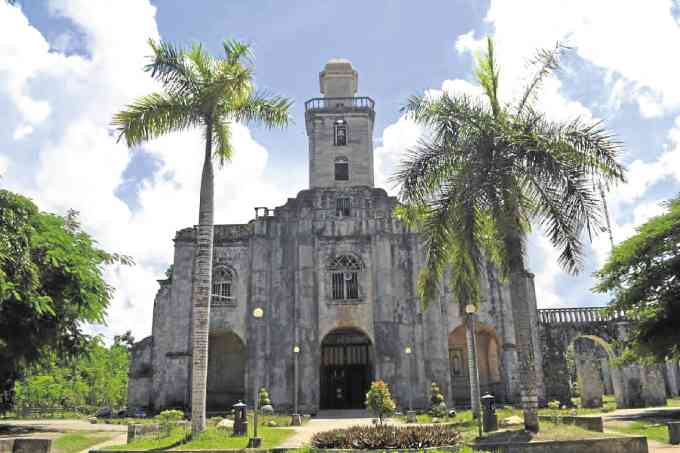 TAGBILARAN CITY—Bohol is rising from the ruins of the 2013 earthquake, which felled many heritage churches and other structures, and the renaissance is signaled by the revival of the province’s exceptional tradition of carving “urna,” or shrines for religious icons.

The renaissance is evident in Santa Monica Church in Albuquerque town, declared an important cultural property by the National Museum in 2013.

The church built in the latter part of the 19th century suffered minor damage in the earthquake. The damage made heritage experts take a second look at the ceiling paintings by artist Guy Custodio and the baroque-inspired retablos by Arsenio Lagura Jr. and his team.

Lagura, a native of Ubay town, has been based in Albuquerque after his marriage to a local. He was tapped before the quake by then parish priest Fr. Larry Organisa to lead the making of the church’s main retablo and and other smaller retablos. They are set to be inaugurated on Aug. 27, feast of St. Monica.

Son of a farmer and a housewife, the 53-year-old Lagura started carving at the age of 17 at a furniture shop in Tagbilaran City and ventured into religious imagery carving around 1990, because “there seemed to be something lacking” from what he was doing.

He said he gets the inspiration for the intricately carved retablos with a local touch from the retablos of the churches of Loboc and Baclayon and his online research.

He said he did this because “baka maglaho, may maalala sila (just in case the practices fade, people would remember them).”

He said he tries to improve his craft by “constant practice” and “praying so that the Lord would give me wisdom.”

Sandugo officials last weekend said they were seeking to revive “urna-making” in Bohol.

Fr. Valentino Pinlac, rector of the Immaculate Heart of Mary Seminary here, said the revival of the age-old tradition along other creative industries was conceptualized after the 2013 earthquake, which destroyed and damaged churches and church properties in the province.

Aside from earthquakes, urnas in the province had been depleted due to antique collecting, the priest added.

Pinlac headed the Lalik (carving) Festival incorporated in this year’s Sandugo. He said lalik aims to develop and enhance the wood-carving skills of local artisans while boosting livelihood in the province.

Pinlac said lalik highlighted not only the province’s artistry and creativity, “but also Boholano cultural identity and religiosity, as well as sustainability in the lives of the Boholanos through the craft.”