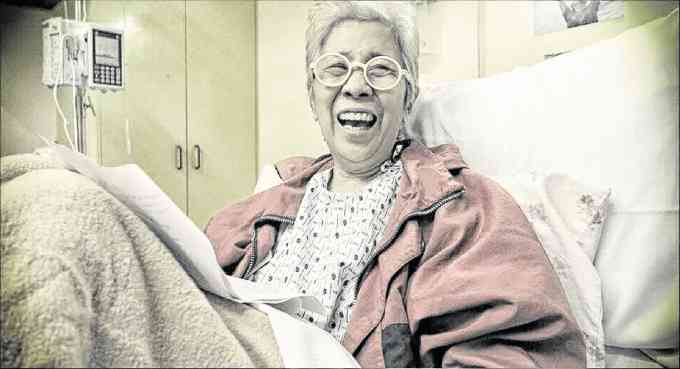 LAUGHING in the face of death. PHOTO COURTESY OF ERIK CRISOLOGO LIONGOREN

IF THERE is anything art worker-gallerist Norma Crisologo Liongoren taught me while in the midst her hard-fought battle with cancer, it is still to think of others first even while drowning in personal challenges.

Her friends in the visual and performing arts fields had just mounted a successful fund-raising exhibit-auction-raffle in her behalf called “For Love of Norma” that grossed over a million pesos in March this year. The money was meant for the patient’s medical expenses. Not a week had gone by when she summoned me to pick up a check in my name.

I though that she had totally lost it, that maybe she was paying me back for a painting I had donated. No, she said, she had heard my family was going through its own struggle. My 88-year-old mother had a rare blood disorder. Norma simply wanted to make a donation to pay it forward. I wonder if there were others to whom she showed that same generosity in the face of her own urgent needs. Mom went ahead of Norma, but the family remains grateful for the gesture

But Norma is crazy that way. I also heard of her wanting to feed the street children of New York Street in Cubao, where her memorable gallery stands at an unforgettable address number of 111, with that money and to pose in the nude for artists. Was she hallucinating or finally throwing all caution to the wind and being herself as she approached the end?

Of the personal data I know of Nong, as I call her, she was educated as a nurse. I’ve always admired her bone structure. When first I met her, she showed me a nude drawing of her done by her husband, the artist Alfredo. He caught her after she had just risen from bed, nude, seated, her arms raised and tying her long hair in a graceful knot. All that in a drawing that reeked of sensuality.

As a young art collector, I wanted to buy it, but it had a sentimental value for her. She offered me and my then boyfriend something else in the gallery stocks—a framed Onib Olmedo pastel—which we paid in what was called “teardrops and waterfalls” or monthly instalments. This was late ’70s to early ’80s. Such was Nong’s trust that we didn’t need reminding about the next “drop.” At a time when collectors were not yet sniffing for Onibs, she pushed his works. And that speaks for countless other young artists who she helped.

Another thing that binds me to Nong are our Pangasinan roots. She constantly fed my husband, a journalist, news tips about the province, particularly Dagupan. When she hosted Church Café Bible classes at her home gallery, her dining table almost always had either oysters cooked adobo style or inihaw na Bonuan bangus from the waters of the northern province where the seafood has a sweet freshness that you needn’t dip it in any sauce.

Nong never lost the girl in her whenever I saw her with her “gangmates” Julie Lluch, Fe Mangahas, Alma Miclat, Imelda Cajipe Endaya, and even with the “boys” of Church Café, including Rev. Stephen Sunil. The study of The Word was often punctuated with boisterous and earthy laughter at the foibles of our ancestors as they stumbled their way to an all-forgiving God.

My astonishment at Nong’s depth of generosity was opening her home to all sorts of auctions and benefits for artists, among them Yasmin Almonte, another cancer survivor. This earned for her an Art-coholic Award from Ateneo Library of Women’s Writings. She was fond of that term and award that had pride of place in her office where she could rarely be found.

Such was her empathy that when Pastor Sunil and family had to vacate their apartment, she threw open guest rooms in her house for them. Her hospitality was limitless. When Tess Ricio lost her husband, the legendary graphic designer Nik, and had nowhere to go, the mother in Nong invited her in and even at the last minute organized a retrospective of Nik’s works.

When she learned I was staying at an artist’s pad to concentrate on some paintings, she asked me to move in with her if I needed more space. I drew the line there—she had just been released from another prolonged hospital stay. I didn’t want to be in the way. When I look back on that, maybe I should have spent a few days with Nong. Then maybe I could have more to share about what a great loss we are suffering from now.